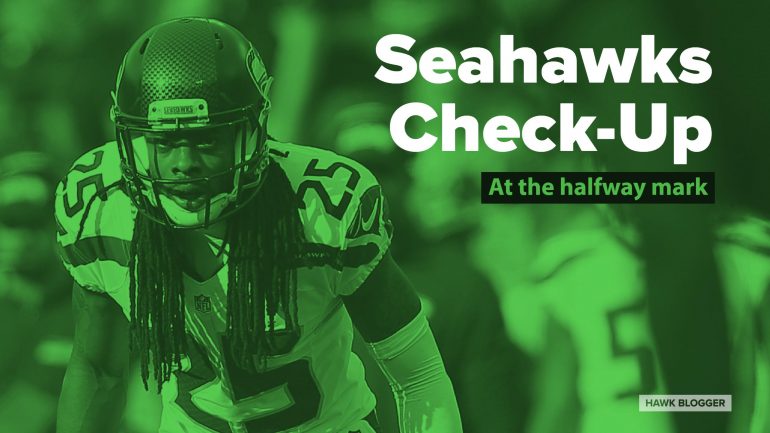 Seahawks 2017 Check-Up at the Halfway Mark

I am an emotional guy. The Seahawks win and life is lollipops and rainbows. The Seahawks lose and the rain is a little wetter and the days a bit shorter. That kind of fluctuation can make it hard to stay objective. It is why I always return to the numbers and put those numbers in context. That helps keep me honest and avoid blindly going along with the dominant narrative or my irrational feelings. Something I have done the last few years is take a snapshot of how the team is doing after each quarter of the season. It helps assess where they are relative to where they were, and often highlights some muted trends that would be hard to otherwise identify. Here we are, halfway through this 2017 season. Let’s see how the team is progressing.

This is the percentage of plays that were runs. Seattle had regularly been a team that ran the ball more than 50% of the time, but has steadily dropped off and cratered last season with runs on only 38% of their plays. Carroll preaches balance on offense, and wants a physical running game to be part of how they “complete the circle” of toughness. I set a target of 51%, which is still well below the 2012-2014 levels, but represents the type of balance Carroll strives for.

Carroll tells everyone “It’s all about the ball.” That references both takeaways and giveaways, but my analysis was that takeaways are where things have really dropped off, and specifically, interceptions. The team was at their best in 2012-2014 taking the ball away when their interception rate was 3.2% or higher. I set a target of 3.0%, which would be their best since 2014.

Another point of emphasis for Carroll is explosive plays. He wants to create them and prevent them. The team has created fewer explosive plays recently and allowed more. That needs to change. I put the target at +2.5 per game, which is similar to their 2013 level, but a bit below.

The Seahawks are at their best when all three units on the team are working together. Carroll values a special teams group that can flip the field. That fell off last year. The target I set was for them to return to a top five unit overall. The Seahawks have dropped from a 44% rush rate after four games to 41% after eight. Many are calling for the Seahawks to abandon the goal of balanced on offense and emphasize the pass. It won’t happen. This is as core to Carroll’s philosophy as it gets, and until the team can find enough success to drive this percentage closer to even, the team will continue to be out of whack.

Interceptions have jumped, nearly hitting the target rate of 3.0% per opponent dropback. The current level is the best Seattle has done in in the past four seasons. That’s an encouraging sign.

Explosive play differential is suffering from a defense that is surrendering far too many. A whopping 23 of the 49 explosive plays allowed by Seattle came in two games (Houston & Los Angeles). They are allowing an average of 4 in their other six games.

Special teams has been a major disappointment. Blair Walsh just blew three kicks. Tyler Lockett looks nothing like the dangerous returner he had been prior to injury. The coverage units have been okay, and Jon Ryan has just been okay. A top five finish does not seem feasible for this group. The other two phases will need to be that much more dominant to pick up the slack. That worked in 2014, so it is not a death knell.

Another area I will be watching this season is how Wilson is able to perform during key situations like 3rd down and in the red zone. He was at his best in 2015 when he dominated this type of situational passing. These numbers are not solely on Wilson. The offensive line, play calling, and his receivers play a large role. Still, these will be important bellwethers as we monitor his growth as a quarterback.

Third down performance has continued to trend down. Wilson was at 74.8 at the quarter mark. Red zone performance has improved slightly from 86.8 to 89.1. Both are still down from last season.

It is useful to compare one four game stretch to another. The chart below compares where the Seahawks were after four games to where they are now.  I like to look both at the absolute numbers and the relative by using NFL rankings. As frustrated as we all are after the loss to Washington, there are signs of improvement almost across the board. The biggest areas of fallback are the running game on offense and the passing game on defense. Of the two, the pass defense is the far larger concern. That has to be a constant the team can rely on. What was a top five unit is now middling in the NFL. You would hope the leap in pass rush would assist the secondary. The improvement in both pass blocking and pass rush is nice to see. As is the improvement on 3rd down on both sides of the ball.