There are plenty of statistical sites on the web. HawkBlogger.com is largely a journal of everything going on with the Seahawks over time. There are times that statistics help to tell that story, and that is why I created this Season Progress Report series a couple years back. A gap in the statistics out there is the ability to freeze points in time, and allow you to rewind and compare how the team has progressed or regressed as the year rolls on. Player splits (e.g., first half of the year vs second half of the year) are common, but team splits are less so, and quarter-season splits can only be found here, from what I know. I track every Seahawks game, and have for years. That allows me to break down trends over any period of time I choose. As this season continues, I will provide a progress report at each quarter point of the year, and highlight other trends I see in-between. You can review the quarter-point progress report here and the midway report here. 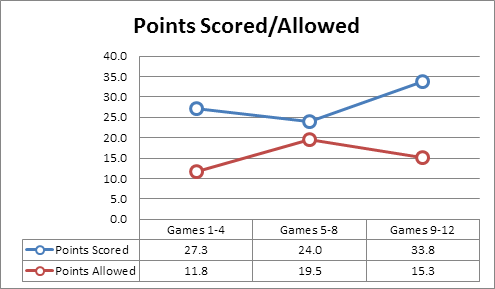 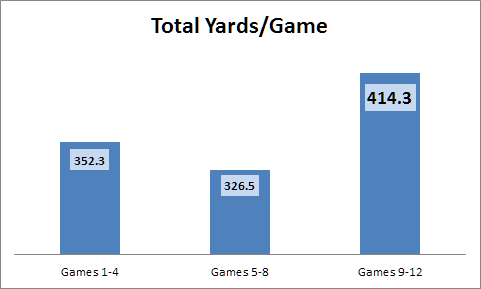 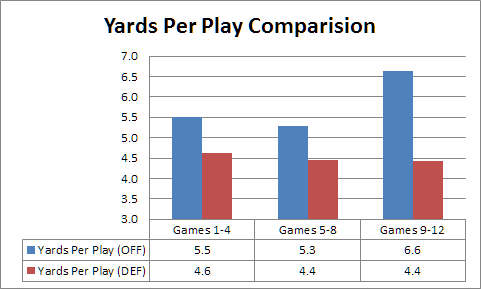 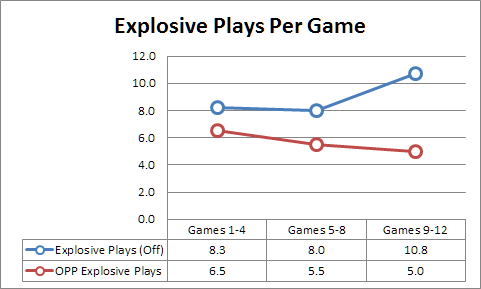 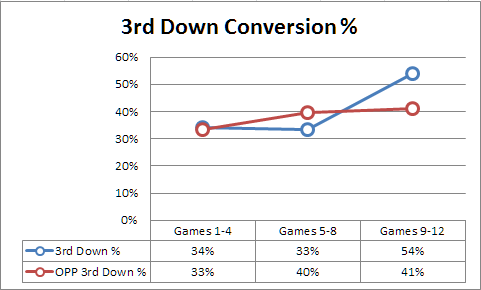 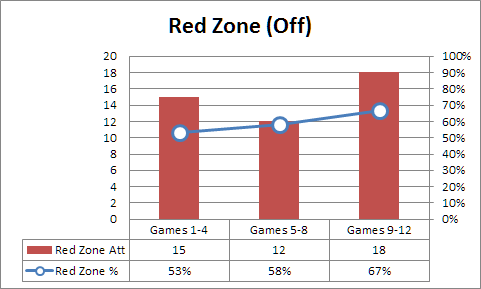 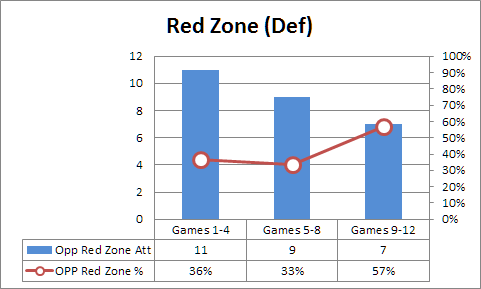 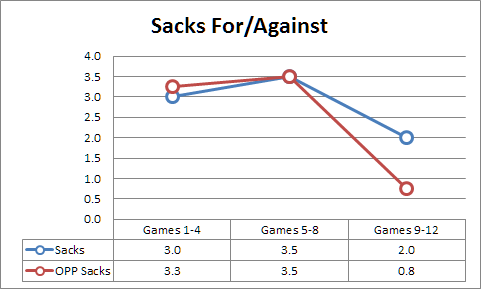 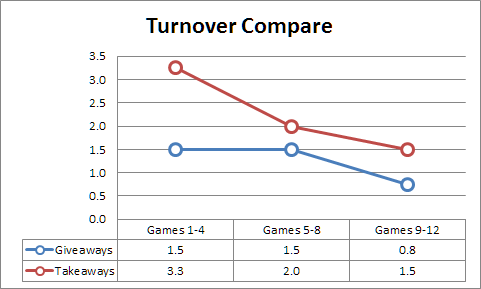 The Seahawks are averaging 6.6 yards per play the last four games. Denver leads the NFL in that category for the whole season at 6.3

The defense has remained pretty steady overall, but was showing signs of wearing down prior to the bye week. Having the offense step forward came at just the right time. Seattle benefited from an unsustainable takeaway rate early in the season, and that helped prop up an offense that had not found it’s footing yet. Now that the takeaways have regressed more to a normal rate, the offense is better able to overcome having to go longer distances for points. They have also cut their giveaway rate by a greater amount than the takeaway rate has fallen off, so even though the Seahawks are getting fewer takeaways, they are still coming out ahead in the turnover battle.

It might be alarming at first glance to see that the defense is surrendering a far higher percentage of touchdowns in the red zone when compared to earlier in the year, but take another look. Opponents have only had seven red zone possessions in the last four games compared to eleven in the first four. Even with a 57% touchdown rate, opponents are still averaging almost an identical number of red zone touchdowns 3.99 during these last four games as they did during the first four 3.96.

The turnaround is pass protection is the most stunning aspect of where the team is now, compared to where they were just four games prior. Seattle had just surrendered seven sacks to the Rams on Monday Night Football when I wrote the last progress report. The team has not allowed more than one sack in a game since, and more than that, Russell Wilson is enjoying significantly more time to throw on every drop-back. That protection will get a great test over the last four games of the year against some formidable pass rush defenses, but Seahawks fans have reason to be optimistic heading into that final stretch.

This is a team that has had a consistently dominant defense throughout the year, which has now added an offense operating as efficiently as any in the NFL. When the team started playing this way over the final eight games of 2012, it felt like a hot streak. This year, it feels like a locomotive gaining steam. The fundamentals are solid, and the areas that were showing weakness have stabilized, and in some cases, become a strength. The defense led the way early. The offense has led lately. It may be time for the special teams to win a game down the stretch.

Seattle plays their next two games on the road, and then will likely not play another road game until the Super Bowl. Each of the teams they will face is playing better now than they were a few weeks ago. The Seahawks will not be able to sleep walk through these games.