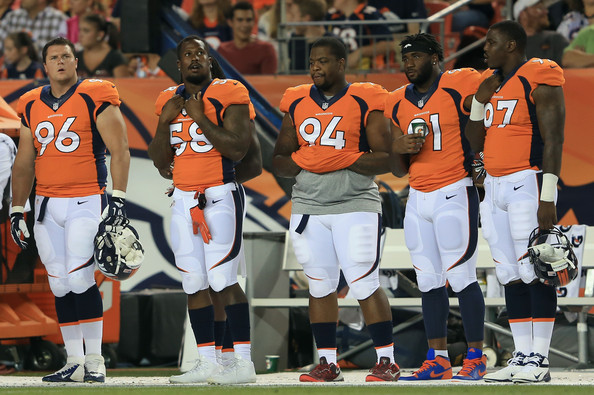 Oddsmakers continue to list the Broncos as slight favorites to win the Super Bowl. I entered this week with some lightly informed perceptions of what Denver was good at on both sides of the ball. After a week of researching their season, watching a number of their games, and checking the numbers, I have a better feel for what Seattle will be facing.

It is hard to ignore the recent trend in the Broncos rush defense when cataloging every game of their season. They are giving up an average of 70 yards rushing over their last four games, including the playoffs, and less than 4.0 yards per tote. Only one team has gone over 100 yards rushing (SD had 177 in week 15) in the last six games. That, after six straight games with opponents rushing for over 110 yards.
Defensive tackle Terrence Knighton (#94) has upped his game, especially after the team lost Kevin Vickerson to injury. He is a tubby and stubby tackle who can be disruptive in the interior line. ProFootballFocus.com had him as the 10th best DT versus the run during the regular season. Brandon Mebane, by comparison, was second behind only Damon Harrison of the Jets, and had roughly double the score that Knighton did. Denver also ranks #1 in the FootballOutsiders.com rankings of defending runs through the middle of the line. All this evidence got my attention, and drove me to the tape to see for myself.
The Patriots piled up 234 yards rushing versus the Colts in the Wildcard round and had 116 yards rushing the first time they played the Broncos so everyone expected that to play a large role in the re-match. Seeing they finished with just 64 yards in AFC Championship led to the narrative that the Broncos run defense stepped up. A few problems with that. The Colts defense that the Pats ran over was ranked 26th in the NFL in rush defense. That discounts a little how impressive their performance was. More importantly, though, was the Patriots abandoned the run early in the game against Denver. They fell behind, but were throwing from the outset. They finished with only 16 rushing attempts and averaged a respectable 4.0 yards per carry. This was an opponent game plan more than stout defense.
San Diego came in the week before with previous success against the Broncos. They had 177 and 131 rushing yards in the two games against Denver during the regular season. They finished with just 65 in the playoff game. How? Ryan Mathews had 187 of those regular season rushing yards, but entered this last game with an ankle injury that limited him early and kept him on the sideline the whole second half. He was averaging over 5.0 yards per carry in the first half. The Chargers quickly moved to a pass-heavy approach, and only finished with 18 rush attempts. The Seahawks have had one game all season where they rushed fewer than 20 times (15 @STL). Lack of attempts will not be an issue.
The last two regular season games were against the Raiders and the Texans who have a combined 6-26 record. Neither had a rushing offense that even ranked in the top twelve. Looking at a running offense that more closely resembles what the Seahawks will bring to the table, I watched both games versus the Chiefs. Denver surrendered 159 and 144 yards rushing in those games. The Chiefs ran a number of plays that resembled the Seahawks sets, and they rely heavily on play-action like Seattle. There was lots of room.
Von Miller was the top-rated run defender on the team, by PFF ratings, and he is no longer playing. Vickerson was 6th-best on the team in that facet of the game before he was injured as well. This is not a porous run defense by any means, but after studying the Cardinals, Rams, 49ers, and Saints for the last six weeks, it is hard to see anything that measures up to those teams in Denver.

Chiefs Are A Poor Man’s Seahawk

The Chiefs games were of particular interest because they have some personnel that resembles what Seattle can throw out there on both sides of the ball. Dominant running back. Play-action passer who can scramble on occasion. Shutdown corner. All-Pro safety. Good speed rushers. They lost to the Broncos twice, so what can we learn from that?
The play-action passing game really exposed the weak Broncos secondary. There were free runners back there all game for the Chiefs in the second match-up. Alex Smith averaged 207 yards passing per game, but threw for 230 and 293 in his two games versus the Denver, to go along with 4 touchdowns and 1 terrible interception. Kansas City marched right down the field on Denver early in the second game when Smith rolled out on play from the 2-yard line and threw it directly to a Bronco.
There were large chunks of additional yards to be had, but the Chiefs dropped a number of easy catches. Donnie Avery, in particular, needed to change his position from “receiver” to “dropper” in the second game.
As mentioned above, there were plenty of rushing yards to have. The team averaged 5.8 and 6.4 yards per carry in those games. An offense that averaged 337 yards per game (2 yards less than Seattle), piled up 452 yards in the game in Kansas City. What held the Chiefs back was a poor 5-9 performance in the red zone across both games, including that head-slapping interception from Smith.
Kansas City did a decent job defending the Broncos primary options in the air to start out the second game. Then, Manning discovered rookie cornerback Marcus Cooper. They isolated Eric Decker on Cooper throughout the last three quarters and he abused the rookie to the tune of 174 yards receiving and 4 touchdowns. It was the difference in the game. There are no Marcus Coopers in the Seahawks secondary. Any quarterback hoping to find a player they can fall back on for repeated success will be disappointed in the outcome.

Bookmakers.co.uk have the Broncos as single point favorites. Any Seahawks fan hoping to hold the Broncos to a few points should brace for impact next Sunday. Manning’s greatest strength is his complete indifference to how he beats you. He will hand it off, swing it out to a running back, throw screens, crossing patterns, posts and everything in between. It is similar to the Saints offense in that they will stretch teams laterally with screens and swing passes, but the Broncos use more crossing patterns. They will also stretch a defense vertically with seam routes and posts.
Plenty of people will talk about the how the refs can affect the Seahawks secondary. Far less will talk about how key it will be for refs to watch offensive pass interference on the Broncos when they run the crossing routes. Denver got called for offensive PI at least four times in the last two games on these plays.
The Seahawks linebackers are playing their best ball of the year right now, and it could not come at a better time as this offense will test them again. Diagnosing screens and getting the right depth on short zones will be key. There was focus on shutting down Jimmy Graham against the Saints, but taking away these crossing routes will be more important versus Denver, even if it means a few more yards for TE Julius Thomas. Do not be surprised to see Kam Chancellor make a physical suggestion to think twice about catching a crossing route.
Decker is a fine receiver, but he will struggle against either of the Seahawks edge corners. The Broncos will likely try to test Byron Maxwell with Demaryius Thomas. That should be a good battle. Thomas is a good receiver, and not afraid of contact. Maxwell has won more than his fair share of 50/50 balls since taking over as a starter. Wes Welker would be a bigger issue if the Seahawks did not have a healthy Walter Thurmond III.
Welker carves up the middle of the field for short throws. Thurmond is such a crazy luxury for the Seahawks. He is a Pro Bowl level edge corner who is playing nickel corner due to insane depth at the position and a suspension that cost him his starting job. Playing inside requires different skills than the outside, and Thurmond is by far the best suited for it on the Seahawks. Welker will make some plays, but Thurmond will as well.

Tom Brady, Philip Rivers, Matt Schaub, and Ryan Fitzpatrick do not exactly scare anyone when they start running with the ball. The Broncos have not faced a ton of scrambling quarterbacks, and they appear vulnerable to it, especially without Miller and Derek Wolfe on the edges.
Smith had 52 and 46 yards rushing in their two games. Andrew Luck ran for 29 yards and a touchdown. Michael Vick ran for 41 yards. Terrelle Pryor had 49 yards in his last game against them.
It is hard to imagine the Broncos line containing Russell Wilson with the current state of their defensive line.

Expect Lots Of Points From Seattle

The type of game that comes to mind when I compare what the Seahawks bring to the table and what the Broncos counter with is something akin to the Bills game last season. Wilson ran for 92 yards and 3 touchdowns to go with 205 yards and a touchdown throw. The team put up 466 yards and 43 offensive points (Earl Thomas had a pick six). That will be dismissed as homerism from a Seahawks blogger. So be it.
Seahawks receivers have not faced a secondary this weak in months. The offensive line has not faced a pass rush this modest in the same amount of time. The front seven is acceptable, but lacks a dominant force. Miller would change the equation significantly. Denver has a decent run defense, but has not faced a rush offense like this at any point during the season.
Throw in a player like Percy Harvin, and the real story of this game will end up being whether the Broncos offense can keep up with the Seahawks offense. Blasphemous, but true.
Start typing to see results or hit ESC to close
real hawk talk softy russell wilson 49ers rams
See all results