The Tao Of Rex Ryan

Rex Ryan was just fired by the New York Jets. His teams were 18-30 over the past three seasons and finished a dismal 4-12 this year. Few people will be asking about Ryan as the two best teams in football square off next week, but Seahawks fans and coaches certainly should. Ryan’s miserable Jets have managed to give the Patriots everything they could handle, losing just one game by more than three points to their rival since 2012. Studying those games provides some insight into the mind of a man who was obsessed with beating Bill Belichick and the Patriots.

Nobody would consider it a stroke of genius to focus on keeping the ball out of Tom Brady’s hands. Ryan managed to do effectively with a team lacking in talent. He did it extremely well. There was only one game between these two teams in the last three years where the Jets did not dominate the time of possession. That game stands out for other reasons as well.

The Jets split TOP with New England in their second game in 2012, and were destroyed 49-19. That was the infamous butt fumble game. On the flip side, the game they managed to win featured a jaw-dropping 77% of possession. That was a 30-27 win in overtime last year.

Each of the other games had New York in heavy possession and each were far closer than talent dictates they should have been. Ryan’s method to gain possession started in a place the Seahawks know well. 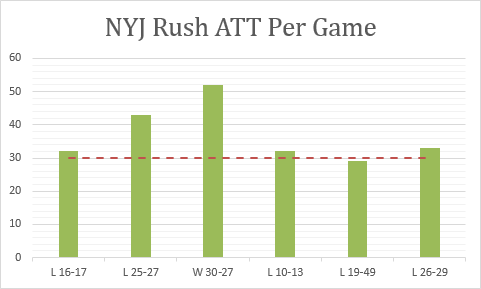 The Jets ran an astounding 52 times in their only win. They did not always run effectively, but they were committed to it. They averaged only 3.4 YPC in that win, and were under 4.0 YPC in two other games where they lost by one and three points.

Seattle was 7th in the NFL in time of possession and had only five of their eighteen games end with less than half the possession. Two of Seattle’s four losses came when they did not possess the ball more than 30 minutes.
The Seahawks were 2nd in the NFL in rush attempts, just ahead of the Jets. They averaged 32.7 attempts per game and had six games where they attempted fewer than 30 runs. They were 3-3 in those games.
There are those who will dismiss those numbers because teams that are ahead tend to run more, but as the Seahawks proved again just last week, they run when they are behind as well. The games where they have been taken out of their running attack have been a combination of a lack of commitment early in games and opposing offenses who possess the ball for long stretches and keep the Seahawks from getting rolling.
My expectation in watching and researching these two teams play was that Ryan would have defensive strategies that confounded the Patriots. Those probably do exist, but were not apparent on first blush. What became obvious is his best defensive strategy was to run the ball and keep it out Brady’s hands. That team requires time to move the ball down the field. Limiting their possessions limits their total potential points. As much as the talk will be about the Seahawks defense slowing the Patriots offense, their best weapon against Brady may be Marshawn Lynch.