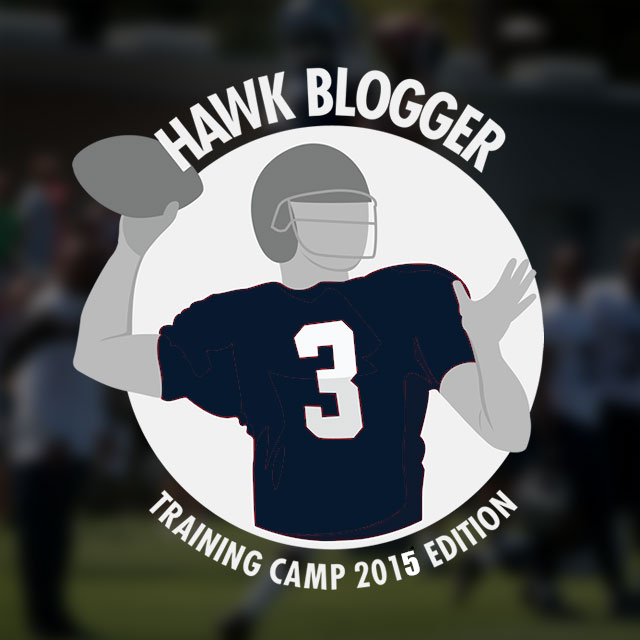 OFF THE CUFF
McNeil, Smith continue to impress
Douglas McNeil and Kevin Smith are going to make roster decisions tough for Seattle. That is a good thing. McNeil did some special things today, which I will detail more below, and Smith did as well. Their performances certainly have to put Kevin Norwood and Ricardo Lockette on notice.

Ahtyba Rubin slides in as a starter
It was no surprise to see Ahtyba Rubin slide into the starting lineup next to Brandon Mebane. Jordan Hill became the backup 3T tackle after Rubin. That may not be the best news, as Hill has not shown much ability to anchor against the run so far. He is a nickel specialist, and a very valuable one, but he has been nothing close to players like Alan Branch, Tony McDaniel or Rubin as a base tackle. This is a chance for Jimmy Staten to possibly step forward or maybe a guy like T.Y. McGill as viable backups.

More depth or more openings?
There have been some reports that the Seahawks appear to have more depth this year. I am not ready to make that proclamation yet. It is clear that there are more opportunities for new players to contribute and there are more intriguing new players than last year. Whether that translates into quality additional depth remains to be seen. The positions that are undoubtedly deeper are receiver and tight end. Offensive line could be deeper, but it may also not be as talented. Cornerback is certainly more thin, especially with injuries. Defensive line should be deeper, but we need to see Rubin as a starter, and who the quality third tackle will be in that rotation. The best place to judge depth is the second half of preseason games. Soon! 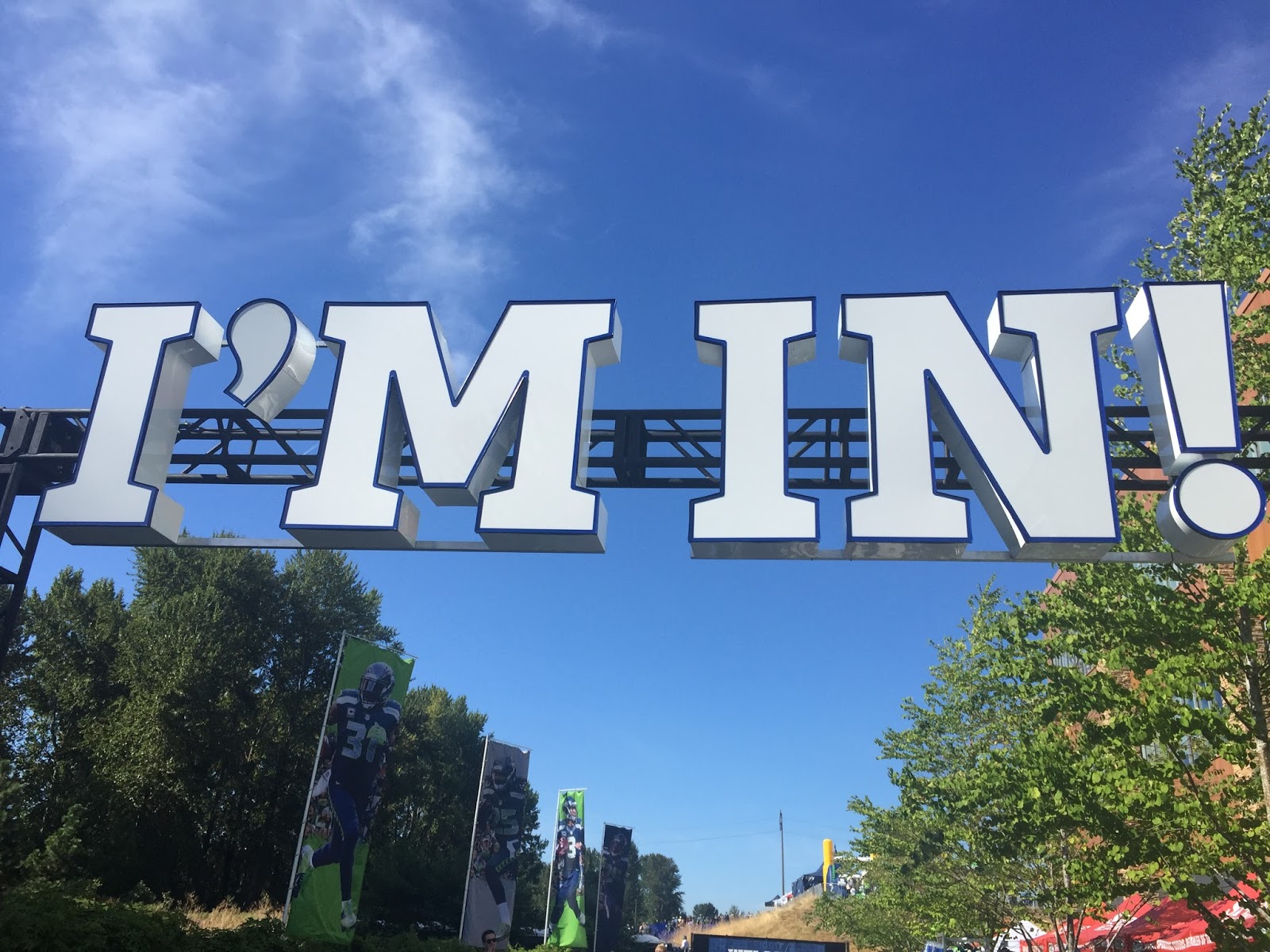 I don’t have time for pretty pictures today as I’m racing against my laptop battery on the plane. Today was a terrific chance to see where Bryan Schneider sees the special teams depth chart on kick coverage. Here is how it broke down:

Some of the above is incomplete as it was hard to write it all down as they shuffled on and off. The notable news here is Lockette being on the second unit. If he is not a must-have special teams player, I don’t see how he makes this squad. There are younger receivers with more upside at a lower cost. McNeil showing up on the third unit and Norwood on the second is good news for both of them.

Terrell being on the first unit is important for him as well. Once Earl Thomas and Kam Chancellor return, there are no guarantees Terrell is even on the roster unless he is a great special teams guy. Michael Morgan showing up on the first unit is good for a guy who has made his living doing that. Watch out for players like Tyrell Adams and Eric Pinkins challenging him on teams, as they are younger and cheaper at linebacker.

Great to see Kevin Pierre-Louis and his speed showing up enough to be on the first team. Ryan Murphy has a reputation as a good special teams guy, so there is a bit of a safety battle in there betwen him and Terrell and Keenan Lambert. They may not play the same safety spots, but it does not always matter at the bottom of the roster.

One other note is that Cooper Helfet was on the first team unit for kick returns. I did not have a chance to get any other players from that side of the drill.

STAND-OUT NEW FACES
WR Douglas McNeil
McNeil not only had two of the best catches in practice, but he had them both against Richard Sherman. The first was in a 1v1 drill where McNeil got deep on Sherman and pulled in the pass despite tight coverage. The play drew oohs and ahhs from the crowd. McNeil celebrated with a little shimmy after. More impressive was a catch during team drills where he caught a pass along the sideline from Tarvaris Jackson. It came during the two-minute drill and McNeil almost stayed in bounds after the catch and tiptoed his way to the endzone, but the referee pointed to a spot where he must have barely stepped out. Again, coverage was very tight. Sherman does not get beat often in practice. I cannot remember the last time I saw him get beat twice like that.

RB Thomas Rawls
Rawls showed why he has been getting buzz with his ability to cut decisively during this padded practice. He could probably be serviceable starter, better than say a guy like Robert Turbin. He still lacks top-shelf speed or lateral quickness, but he did well both running and catching the ball today.

TE Jimmy Graham
Graham caught my attention for something other than catching the ball today. He was part of the running drills and had a great downblock on Cassius Marsh after coming in motion. He knocked Marsh back and finished the block. I guarantee you that will show up on the team highlights tomorrow that they show the players.

LB Tyrell Adams
This guy is on the official watch list. He had a great finish to practice by sticking with Rawls deep down the field on a wheel route and running him out of bounds before he could make a catch, and then making a great break on the ball to knock down a pass on the next play. A few plays later, he again demonstrated good instincts and speed tackling Rod Smith in the backfield on a sweep. This undrafted free agent is doing all the right things early in camp.

S Keenan Lambert
I missed who he did it to, but Lambert had a flash play when he absolutely planted an offensive lineman in the backfield. It was a reverse pancake and was violent enough that I expected there might be a fight when the lineman got up. Kam’s half-brother, indeed.

DL Frank Clark
Clark again got most of his reps inside and flashed some nice ability to play the run in the rushing drills. He shed blocks well, and was not getting pushed back.

1.  Justin Britt is capable of pass blocking someone

A bit harsh, yes, but this has been a disaster for Britt in most practices. He managed to stone Marsh in one rep on 1v1 drills, which is a serious accomplishment the way Marsh has been playing.

2. Kona Schwenke is being tested at right tackle
Tom Cable was spending a fair amount of time coaching up Schwenke as he did a decent job during 1v1 drills. He is listed as a guard on the roster, but this may be the newest Alvin Bailey-like conversion Cable is attempting.

GENERAL IMPRESSIONS
I watched 1v1 pass rush drills with total focus today, and noticed some interesting tidbits. Bruce Irvin, Cliff Avril and Michael Bennett were given the day off in this drill. That seemed to be done with the hope it would allow some of the young lineman a chance to focus on their technique and not just worried about getting their butts whooped. It seemed to work.

The flip side interpretation could be that the pass rushers struggled, but give your offensive lineman some credit today. It is a tough drill and they showed a lot of grit.

Travis Jones could be seen coaching up Staten after the drill, and Bennett was giving some tips to Marsh. People can be mad at Bennett all they want, but he’s here and engaged in practice.

Speaking of Marsh, he was again the most fearsome pass rusher on the field. He got caught jumping offsides a few times, but this is a guy who should help this defense this season.

Tyler Lockette and Doug Baldwin both showed off their shiftiness today. Lockette shook Tristan Wade in one drill to gain significant separation, and then shook him again after the catch for what would have been a nice gain. Baldwin drew gasps absolutely twisting a defender into a pretzel off the line. People have no idea how good he is at releasing off the line. Darrelle Revis got a lesson in it during the Super Bowl. There may not be many better in the NFL at getting that initial release than Baldwin, and it is an underrated part of getting open in this league.