Take a look at the Arizona Cardinals, and the most impressive part of their football team is their wide receiver corps. Larry Fitzgerald may have been the best of all time if his career had not been littered with garbage quarterbacks. John Brown is one of the most dynamic and complete receivers in the game. Michael Floyd is a former first round pick who has developed into a dangerous weapon. They even have more depth behind those big three. ProFootballFocus.com named the Cardinals receiver room the best in football, and it is hard to argue. How the Seahawks secondary matches up with this powerful crew will be a key factor in how this pivotal NFC West matchup plays out.

Seattle has one joker in their secondary deck. They can dictate progressions for Carson Palmer and funnel the ball elsewhere depending on where Richard Sherman is on the field. The Seahawks have a few choices here. Their standard approach has been to leave Sherman on one side of the field and essentially let the offense decide who they will line up against him. The other approach that they have done far more this year than in the past, is to pick a receiver the team wants Sherman to take away.
It is easy to determine a plan when facing a team like Dallas or Cincinnati where there is one receiver who is clearly the best of the bunch and who the opposing offense relies on to function. Even there, though, the Seahawks started the Bengals game trying to leave Sherman on one side, but were forced to switch approaches in flight.
Arizona is a tougher offense to plan for because they are more of a hydra at receiver. Michael Floyd and John Brown have battled some injuries this year, but if you look at the games this season where the Cardinals have had all three receivers healthy, you get a decent view of how the ball is spread. 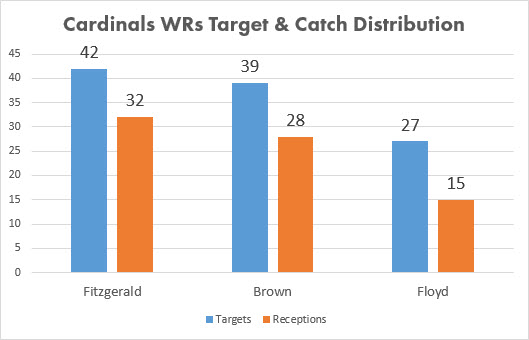 Fitzgerald is the top target, but not by much over Brown. Floyd is predictably a distant third. It is also worth noting that Floyd’s catch rate is considerably lower (55.6%) than either Brown (71.8%) or Fitzgerald (76.2%). 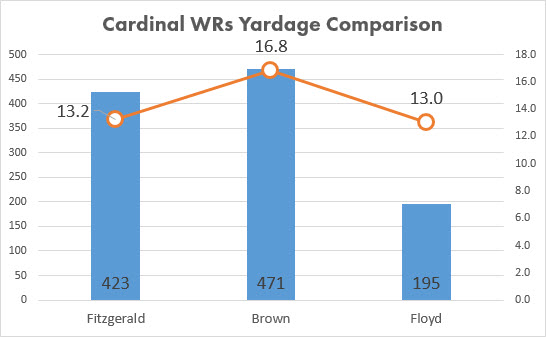 During those same games, you can see how Brown is a very different receiver than either Fitzgerald or Floyd. He has more yardage despite having fewer receptions due to his big play ability.

I would prefer to see the Seahawks limit Fitzgerald’s impact, which they have done successfully in the past.

Even when Carson Palmer was healthy in 2013, Larry Fitzgerald totalled 10 targets, 5 receptions, 35 yards and 0 TDs in two games

Putting the pieces together

Sherman is a good match up with Fitzgerald, and less so for Brown. Putting Sherman on Fitzgerald would also allow Kris Richard to funnel the rest of the coverage to help on Brown over the top, limiting his big play ability. Cary Williams would be asked to cover Floyd, which seems like a reasonable match up.

There are not many corners in the NFL who can stay with Brown. There has been some question to his health heading into this game, but he expects to play and will be a headache for whoever lines up across from him. A healthy Jeremy Lane would definitely be nice, but it more likely will be Marcus Burley. DeShawn Shead has been doing a nice job in the nickel, but he lacks top-end speed. Burley seems better suited to cover Brown with lots of help from Earl Thomas over the top.

Those are all man-to-man considerations. The Seahawks play a ton of zone, so in those situations, it will be more about proper spacing and discipline than about any individual matchup.

However the Seahawks choose to defend the Cardinals receivers will be a critical strategic decision for Richard and his staff. Their ability to slow those weapons will play a large role in helping the pass rush to get home. Put those two things together and the Seahawks would be in good shape for an important win.