Strengths vs Weaknesses: Seahawks and Panthers Prepare for Battle 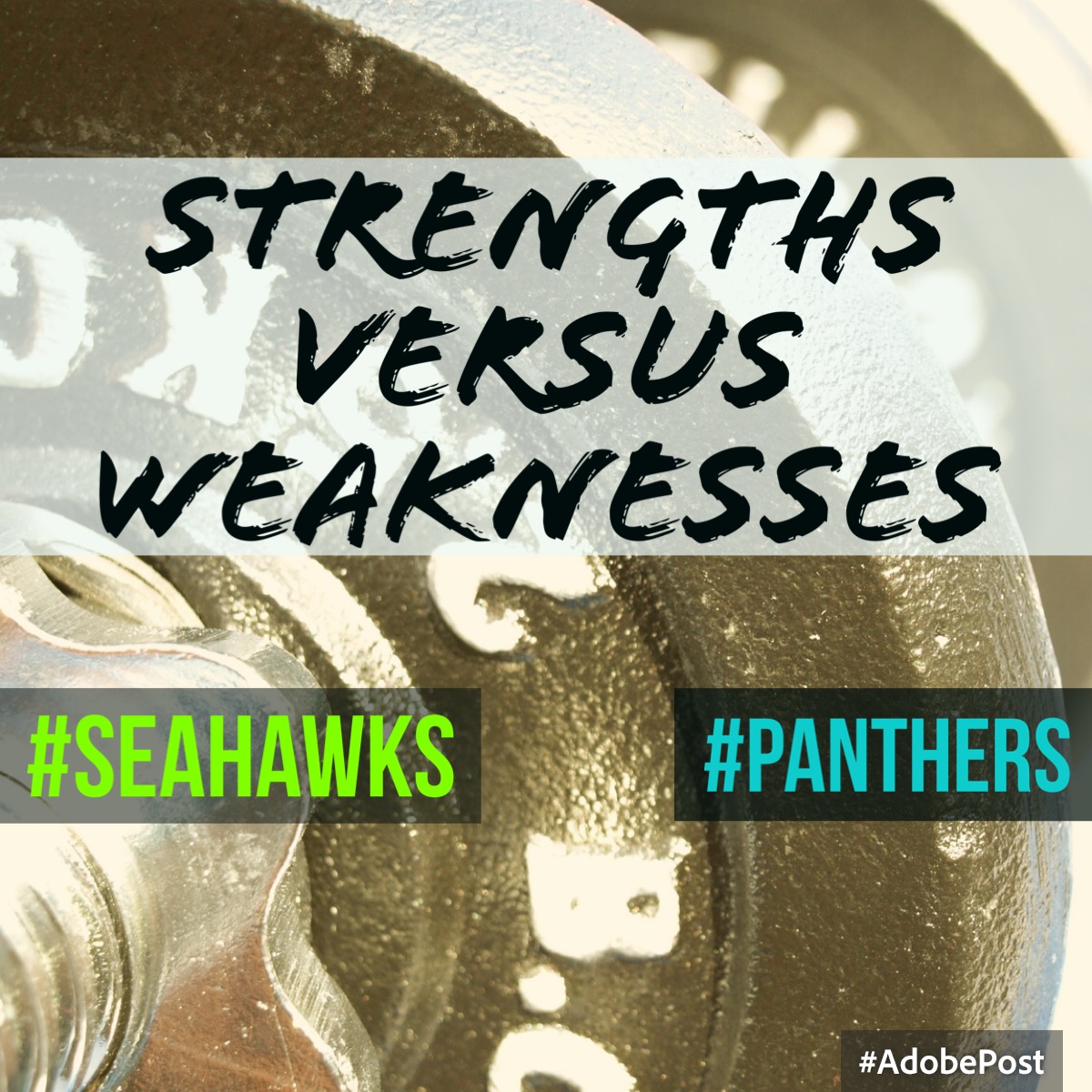 Much has changed since the last time these two teams faced each other. The Panthers got the validation they needed by defeating their nemesis in the Seahawks on the road in comeback fashion. The Seahawks stabilized their offensive line and saw their offense take off while patching a massive hole in the secondary named Cary Williams. Both teams have considerable strengths and few weaknesses.

This is the matchup that will decide the football game. Seattle’s offense and Carolina’s defense are roughly equivalent in terms of quality. Both are legitimate Top 5 units. Both are almost equally effective in the passing game and the running game. The edges between the two are subtle.

Carolina has the best middle linebacker in football, with apologies to the Seahawks All-Pro Bobby Wagner. Luke Kuechly is a transcendent talent at his position. He has a remarkable ability to diagnose plays and hit the hole with extreme speed and form tackling. Missed tackles are very rare. He is also the best coverage linebacker in the game, finishing with as many interceptions (4) as heralded corner Josh Norman. Kawann Short and Star Lotulelei form a powerful interior tackle combination that make inside runs difficult, especially with Kuechly filling in behind them. Oh, and linebacker Thomas Davis is not all that far behind Kuechly. He is would be the best player on many defenses.

Those three players going against Justin Britt, Patrick Lewis, and J.R. Sweezy could be favorable matchup for Carolina that gums up the works for Seattle. The Seahawks want to establish the run in any game they play. Marshawn Lynch’s unique ability to grind yards when blocking breaks down could prove pivotal in this particular game, should he be able to play near his standards.

You may have also noticed that the Panthers are tops in the NFL in limiting opposing QBs in yards per attempt. Limiting the Seahawks big plays will be an important job for that Panthers secondary. Expect Josh Norman to line up on Tyler Lockett to keep him out of the game as much as possible. The Seahawks can control that to some extent by where they line Lockett up since Norman does not cover receivers in the slot.

The Seahawks ability to protect the passer has gone from a massive weakness to at least passable. They are fortunate that the Panthers are not a particularly strong pass rushing team. Short is their best in that category.

Carolina is very strong up the middle, but they have some questions on the outside. Starting corner Charles Tillman has been lost due to injury, as has slot corner Bene Benwikere. Cortland Finnegan and Robert McClain step into those roles. Not only does that open up opportunity for the Seahawks receivers to win a higher percentage of their 1v1 battles, but it also could exacerbate the Panthers challenges on 3rd downs.

The Panthers rank just 13th in the NFL in 3rd down defense, and the Seahawks have become one of the best 3rd down offenses in the league. Carolina is decent in the red zone, but is not among the league leaders. Those situational defensive moments that often decide the difference between a win and a loss rely heavily on familiarity with the scheme and with one another. Two new corners greatly increases the chances of a backbreaking miscommunication.

I found a couple shockers while researching this Panthers defense.

Norman, who started so strong, has allowed an opponent passer rating of 95.4 in his last three games. The Panthers need him to be a shutdown corner for their secondary to have a chance to function.

For whatever reason, this powerful line and great linebacker crew has trouble with power short yardage runs. The problem for the Panthers is they also have struggled with 3rd and long. They ranked 27th in the league in preventing 3rd and long (7+ yards) conversions over the last seven games of the year. The Seahawks ranked #1 in those situations, converting a mind-boggling 47.7% of their chances over the same seven game stretch.

Losing Tillman matters more than any Panthers fan, coach, or player wants to admit. His absence, combined with the Seahawks excellence in 3rd downs and red zone chances, give the Seahawks offense a good chance to come through in game-deciding moments.

The Panthers offense cannot be judged on face value. On the surface, this is a battle of the titans between the top-ranked scoring offense against the top-ranked scoring defense. Not exactly. The Panthers offense benefits from a defense that has caused more turnovers than any other in football, and by a wide margin.  The Panthers scored a league-leading 13 touchdowns after a turnover this year, with an average starting field position of the opponents 33 yard line, per Pro-Football-Reference.com.  The Panthers starting field position for all their scoring drives (Own 38-yard line) was second-best in the NFL.

A better indicator of their offensive efficiency is their yards per play rank (12th). They are an above average offense, that has benefitted greatly from field position, and has been fantastic in the red zone.

The Seahawks defense has made life miserable for Newton and the Panthers over the years. Even in his triumph this year, he threw two interceptions. Still, the Panthers are not an easy task for any defense. No team Seattle has faced has been more committed to the run. Jonathan Stewart is as tough as they come breaking tackles. Newton causes plenty of his own headaches.

This Seattle defense is better than the Panthers offense. That doesn’t mean it will be smooth sailing.

Stewart is the key. The Panthers will slam him into that Seahawks line over and over again. When he is breaking tackles, turning two-yard gains into six-yard gains, the Panthers are very tough to slow down. Brandon Mebane, Ahtyba Rubin, Wagner and K.J. Wright need to be at their best.

No team has held the Panthers under 100 yards rushing all year. Do that, and the chances of a Panthers win drops precipitously.

Carolina is a dynamic red zone team. Newton is the best red zone weapon in the game. Seattle’s offense got hot over the last half of the year and converted 69% of their red zone chances. The Panthers converted about that same amount for the full season.

Greg Olsen will be the matchup everyone will want to talk about. He had a big game, including the winning touchdown, in the first contest. It would be very interesting if the Seahawks chose to take him out of the game with a combination of Kam Chancellor and Wright. That could open the door for some underneath dump passes or screens to Stewart, but Newton’s security blanket would be gone.

Ted Ginn Jr has 10 touchdowns receptions. Most of them are on go routes where he just runs past the defender. Seattle has to stay on top of Ginn. Quick strike touchdowns are how the Panthers prefer to play.

The Seahawks ability to defend the pass against a team with one of the worst completion percentages around gives them a big edge. Very few teams can legitimately claim to be elite against the run and against the pass. Seattle is one of them. Newton gets sloppy and frustrated when his early reads are not available. His sack rate is in the bottom third of the league.

When he does connect, it is often for big plays. Seattle excels at limiting those. The Seahawks just played a masterful defensive game against a great running team in the Vikings. If they can frustrate the Panthers run game, the chances that Newton will force throws increases greatly.

Carolina is the worst kick return team in the league, but has a decent punt return game with Ginn. Jon Ryan will be playing with a broken nose, and has not had his best season so far. That is something to watch.

Lockett will have a tough time in the kick return game, going against the best kick coverage team in the league, but he should get some chances against a mediocre punt team.