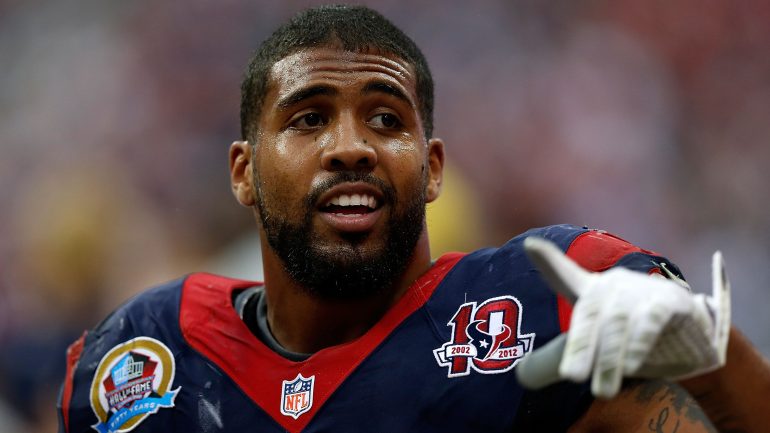 Andrew Luck #12 of the Indianapolis Colts looks to pass against the Houston Texans at Reliant Stadium on December 16, 2012 in Houston, Texas.

The Seahawks have yet to sign a player that was not already on their 2015 roster. Bringing back Jermaine Kearse, Jeremy Lane, Jon Ryan and Ahtyba Rubin addresses four of what I consider between seven and nine spots that John Schneider is likely to go after in free agency. The big one, left tackle, is in a holding pattern as Kelvin Beachum, Russell Okung and Donald Penn try to find their next home. Seattle wants to address that position before wading too deep in the free agent pool so they can be sure enough cap room is available. Once filled, the Seahawks will still have a healthy shopping list, with talent available that could improve the roster. Here is a look at the remaining priorities, and some possible targets.

Beachum is set to visit the Jaguars today. It feels like a bit of a staring match between Beachum and Okung to see who will sign first. Should Beachum, Okung and Penn all sign elsewhere, Seattle will quickly move on to a player like Will Beatty or possibly Ryan Harris. Andre Smith would be another option. Smith and Harris would likely signal a move to left tackle for Garry Gilliam.

There are still a decent list of veteran guards on the market. Seattle has yet to show much interest in what is out there, but they could return to this position when the prices reach their cheapest level. It is possible Schneider could even wait until after the draft to bring in a veteran. There are often June cap cuts. Some of the interesting players already available:

There are plenty of these guys in the draft, but Schneider prefers to enter the draft without being forced to address a specific position. Seattle is said to be hosting Brandon Thompson, and has already hosted Sealver Siliga. Cam Thomas was another name rumored to have come to Seattle for a visit. Thompson would be a nice addition as a 26-year-old former Bengal, who was stuck behind Geno Atkins.

There are tons of great options here, which should keep the prices way down. Seattle does not need a starter. They are said to be hosting Lance Dunbar, who is a perfect fit in the third down role. Starks is a guy I thought might be an option here. He is reportedly visiting the Patriots. Here are some other options:

This is a position I would really like to see the team try to address in free agency. There are some great blocking tight ends out there, and Seattle has not been kicking the tires of any of them so far. Jermaine Gresham already went back to the Cardinals on a one-year deal. Clay Harbor would be a really nice option as a young blocker, with some decent hands. He is said to have been on a visit to the Patriots already.

I would expect Seattle to add a veteran backup to the roster. They could choose to go young if the cap room needs to go elsewhere. There are not a lot of great options outside of Tarvaris Jackson.

I think they will address this position in the draft, but there are some options on the market that could come aboard for the right price, and not be relied upon to contribute. If they work out, great. If not, no worries.

This should be one they can fill late, but there are some nice veteran options.