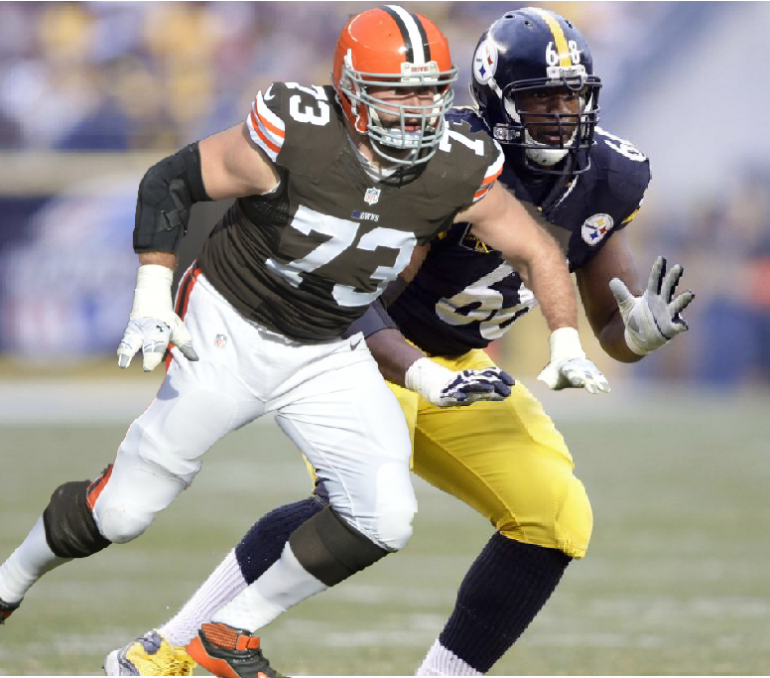 Kelvin Beachum Over Joe Thomas, And Here’s Why…

Four options have emerged as possibilities to play left tackle for the Seahawks next season. Each has merits. Each has risk. The most recent rumor gaining steam is that the Seahawks may go after Browns left tackle Joe Thomas via trade. He is widely considered the best player at his position in the NFL. Adding that kind of talent to the Seahawks line is appealing for obvious reasons. So why would he be my third choice out of the four options for Seattle? Let us go through each option and explain.

Word is that Okung may be forced to accept a one-year deal with a team due to his injury history and his current shoulder problem. I brought this up when his surgery news broke, and was mostly told that idea was ludicrous and that he would get a massive contract.

I think the Okung news greatly increases the chances he will re-sign with the Seahawks for a one-year deal. Will never get market value now.

There are plenty of reasons for Okung to take a one-year deal and re-enter free agency next year still young enough and healthy enough to get much bigger contract. John Schneider has been a master of these deals in the past with guys like Michael Bennett, Tony McDaniel, and Ahtyba Rubin. As much as I like Okung, my guess is his cost could run as high as $6-8M for that one year, which could preclude the team from adding additional line help, and he would almost certainly be gone after this season. His durability challenges and current injury make that a risk I’d rather not take when there are some equivalent or better options out there.

This is how much I dislike trading draft picks. Thomas is a fantastic player, and has never missed a game in his career. His contract is more than reasonable the next three years, especially considering where he ranks in terms of talent at the position.

But the calculus with adding Thomas is not just about the money or the talent. He will require draft compensation. Former agent Joel Corry was on with Dave “Softy” Mahler yesterday stating that he thinks Thomas would cost at least a first round pick this year, and likely at least a second next year.

I can hear Pete Carroll already, “Joe Thomas is our first round pick, and we are pretty happy about that.” He would be beaming as he said it, and I would be cringing. How did that work out the last two times? Percy Harvin and Jimmy Graham were also considered among the best players in the league when they joined the Seahawks. They commanded huge salaries and cost more than a first round pick.

This is one of the most talent-rich drafts in recent memory when it comes to the defensive line. There is a limit to how much the team can afford to patch holes with expensive free agents. Draft picks are gold. A trade for Thomas would be saying that the team believes adding one great starter at the left tackle position is more important than adding one good starter at that position and two other potential starters at other positions. Seattle would be better off keeping the picks they have and taking four players in the Top 100 drafted.

Bennett and Cliff Avril are aging. The offensive line needs more quality young blood. They need more young corners and safeties. They need another young running back. Trading for Thomas means either ignoring or scraping the bottom of the dollar bin to address a couple of those spots. I think the Seahawks have better options.

One of those options is Penn. He has been durable and reliable at left tackle. He is a free agent and will only cost money to sign. He has flexibility to play guard or tackle. At 33, he is a short-term option whose cost should be contained. Why would I prefer the older Penn over Okung? Penn has not missed a start since 2007. He also is a little nastier, which the Seahawks line desperately needs.

Signing Penn allows the team to draft a tackle and groom him to take over in a season or two. He is nowhere near the player that Thomas is, but you have to think of it as Penn plus a first and second round pick versus just Thomas. If I had Thomas on my team and someone offered Penn and those picks, I would take that deal.

I am little surprised Beachum is still available. From a talent perspective, he is right up there with Okung, and arguably a bit better. At just 26, he is also a few years younger. He is coming off an ACL injury which clearly is impacting his value. Smart teams will look right past that. Full recovery from ACL injuries is almost certain in modern sports medicine.

He sustained the injury in October, which means he should be back on the field by April at the earliest or July at the latest. This is a guy you could sign to a long-term deal at a discount rate, with possible Pro Bowl upside.

ProFootballFocus.com rated Beachum as the third-best free agent offensive lineman, just barely behind Kelechi Osemele and above Mitchell Schwartz. They also profiled him as a secret superstar before last season began.

“While it takes a village to protect a quarterback, left tackle Kelvin Beachum was the best of [Pittsburgh’s line], and one of the best in the league in that regard.” – PFF

They also rated him at #60 of their top 101 players from 2014. The PFF site can often underrate players, but they rarely over-rate them. Beachum is a young stud. He is a guy who could be a cornerstone on the line for the next 5-7 years. Yes, he is coming of an injury, but he played every game in 2014, something Okung has never done.