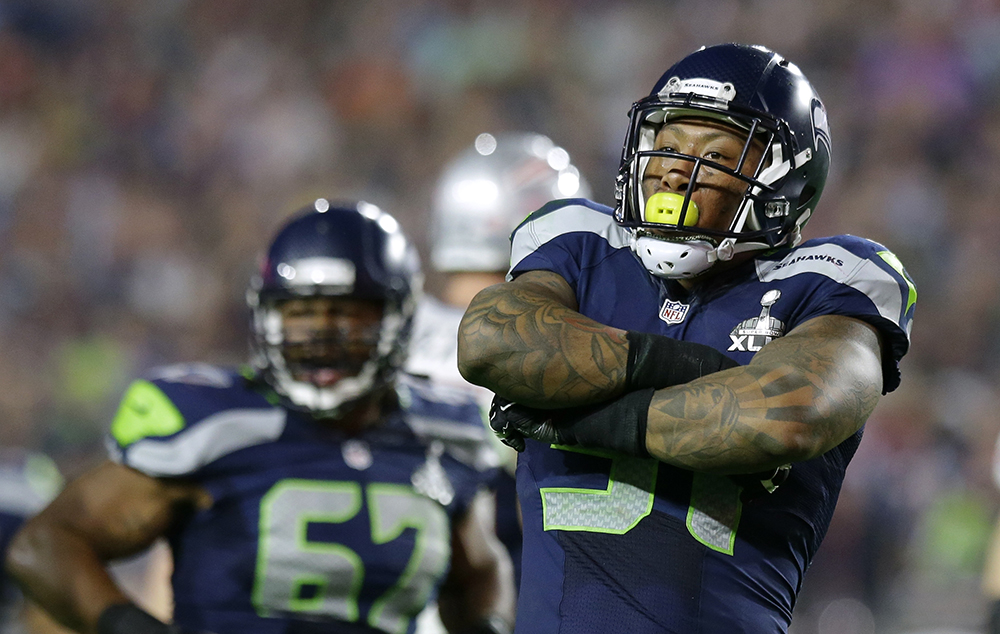 Irvin to the Raiders

Reports came out last night that Bruce Irvin will sign a new deal with the Oakland Raiders as soon as free agency opens today at 1PM. It should come as no shock to Seahawks fans that Irvin moved on given that the Seahawks were unwilling to pay him $7.8M for one season to keep him here, and his market was likely to demand a contract that will average more than that per season. Irvin leaves Seattle as one of the more productive pass rushers the team has ever drafted. His 22.0 sacks ranks 4th on the franchise list after four seasons, trailing only Jeff Bryant (34.0), Cortez Kennedy (28.0), and Rufus Porter (25.5).

His conversion from rush defensive end to starting SAM linebacker drastically reduced his chances to rush the passer, and he never quite developed a full arsenal of pass rush moves to become a highly efficient rusher. His speed, strength and toughness were unquestioned. Irvin, a former safety early in his college career, had a rare combination of coverage, pass rush, and run defense skills that made him a terrific fit at linebacker. Still, he never seemed to turn the corner and become the dominant player that his skills seemed to indicate he should be. He also turns 29 this year, and the Seahawks had to be careful about inking any older player who is less than a Pro Bowler to a lucrative long-term deal.

For some time, I have been eyeing Courtney Upshaw as an ideal replacement for Irvin at SAM linebacker, with another player stepping up into the pass rush role he played in the nickel. Now, Frank Clark has tweeted out that he is down to 257 lbs.

Y’all think I haven’t been workin! The plan been in affect. pic.twitter.com/chkVHOJ7fZ

Irvin has weighed anywhere from 245-265 lbs when he was with the Seahawks. Clark played last year closer to 275. If the Seahawks have asked him to slim down, the likely reason would be that they see him as the most likely candidate to step in for Irvin and fill both his role as a SAM and fill in as a nickel edge rusher. That makes a ton of sense, and is an exciting prospect.

Clark flashed enough potential during preseason last year to think he has a lot of untapped upside. We already know he is tough as nails and is terrific against the run. He may prove to be a more effective pass rusher than Irvin as well. The bigger question is how he would perform in coverage. Seattle could adjust coverages to require less of their SAM, which is something they have done at times in the past. Clark played linebacker at Michigan, though, so coverage may not be as much of a dropoff as one might think.

Cassius Marsh provides another option to compete for the role. Marsh played last year around 254 lbs, after playing at closer to 270 lbs as a rookie. He is a plus run defender who has not yet translated his pass rush promise in practice onto the field on gameday. He appears to be more of a try-hard pass rusher with a quick first step, but not enough bend to get home. In other words, he does not corner well enough to run a tight, quick arc to the quarterback. It is still just his third year, so nothing is set in stone. Increased reps could help him find his pass rushing mojo. Even if not, playing him at the SAM would be a nice way to get some value out of a talented player they took in the draft.

Marsh has shown the ability to make some tackles in space, and should have the strength to set the edge. Again, the question here would be coverage ability. Marsh has been a defensive lineman most of his career, so the transition to linebacker may not be as natural as it would be for Clark.

Eric Pinkins was a safety in college, drafted to play corner, who has since been moved to SAM. He theoretically should be the best in coverage of the three, but this was a guy who weighed 216 pounds coming out of college. He has bulked up, but you have to wonder about his ability to set the edge and get off blocks. I have liked what I have seen as a blitzer from Pinkins in training camp, but he would not be someone who would be rush end in nickel the way Marsh or Clark could be.

Another strong option would be for Kevin Pierre-Louis to step forward and demand a starting role with a great offseason and preseason. He has all the skills to be a great linebacker, but he was uninspiring in his opportunities last year after a promising rookie season. Should he emerge, it would be K.J. Wright would shift back to SAM, and Pierre-Louis would take over at WILL. He is too small to play SAM.

Given their choices within the roster, Seattle could decide to stand pat and look to the draft to add some more to the position. They could also wait in the wings and go after some second or third tier players like linebackers Mason Foster and Tahir Whitehead. They could also explore some pass rush options like Quinton Coples or veteran like Dwight Freeney. They will look for bargains who can add to the competition and reduce the risk, but do not look for a big name signing to offset the Irvin loss.