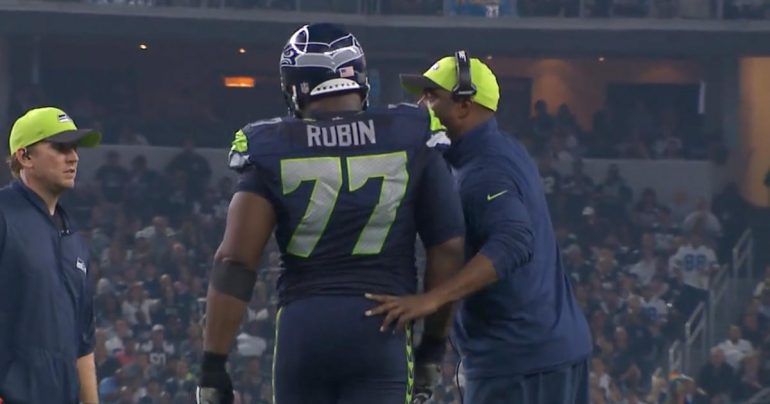 Ahtyba Rubin resigned with the Seahawks on three-year deal, totaling $12M, with $6M in year one, according to Ian Rapoport of NFL.com.

The #Seahawks signed DT Ahtyba Rubin to a 3-year deal worth $12M, source said. He gets $6M in year 1. He wanted to stay.

That $6M compensation in 2016 would represent a 130% raise over the $2.6M Rubin received last season. The details of these contracts usually take a few days to leak out, but these numbers are pretty sobering, if accurate. The players who had a $6M cap number for Seattle last year were:

Rubin was a valuable role player in the Seahawks top-ranked scoring defense, but he is not a difference maker like the others in that list. He won’t be averaging $6M over the course of the deal, and I would have predicted $3M-$4M per year before free agency started. He got the upper end of that range. That is good for him, but it raises questions about what the impact is on the Seahawks cap situation this year, and whether this is going to be a year of serious price inflation among free agents.

The salary cap went up significantly last year for the first time in a while, and we saw teams unable to control themselves in handing out huge deals (see Miami). If a guy like Rubin, who is nearing 30, is not a pass rusher, and plays a position that is deep in both free agency and the draft, can get a big raise, what does that mean for impact players at positions where there is less depth?

This could further push John Schneider down the path of bargain shopping. He has done this in past years where the Seahawks are quiet the first week of free agency while the sharks feast, and then he swoops in picks off a few of the remaining players who maybe did not have the market they hoped for, and are more flexible on salary.

This strategy also helps on the compensatory pick side of things. Cheaper contracts either do not factor in at all, or only impact lower round comp picks. This is why players like Evan Mathis, Jon Beatty, Geoff Schwartz and Zane Beadles could be more intriguing for Schneider than guys like Donald Penn or Kelechi Osemele. That may be shrewd cap management, but this offensive line needs top-shelf talent. Continuing to stock it with only aging veterans or late-round rookies limits the potential of the entire team.

I believe Seattle needs a cornerstone on that line, and needs to pay to get one. There are some great options out there this year in free agency, but they will cost you. Applying $6M in cap space to Rubin, assuming that number is accurate, is not going to help matters. The reality is that contracts can be structured in a way that almost any player can be signed. The team could be giving Rubin a bunch of money upfront to make room for a back-loaded deal for another free agent. That is not necessarily likely, but is possible.

With news out there that J.R. Sweezy is commanding a ton of attention from as many as 10 teams, Russell Okung and Bruce Irvin likely on their way out the door, the Seahawks could be facing their first significant talent drain. That’s without factoring in the possible loss of Jeremy Lane and Jermaine Kearse.

Schneider rightly values his own free agents more than players from other teams. If we find out that Ian Williams, a 26-year-old defensive tackle with a lot more upside than Rubin, signs for a deal similar to what Rubin got, it will be disappointing. For the record, that is exactly what some have been predicting.

I like Rubin. I am glad the team has him back in the fold. I don’t love his price tag. I withhold some judgement until more of the contract details are available, and we see how it stacks up with other players at his position. For now, we can breathe a bit easier knowing a high-effort player in the middle of the Seahawks top-ranked defense is back.