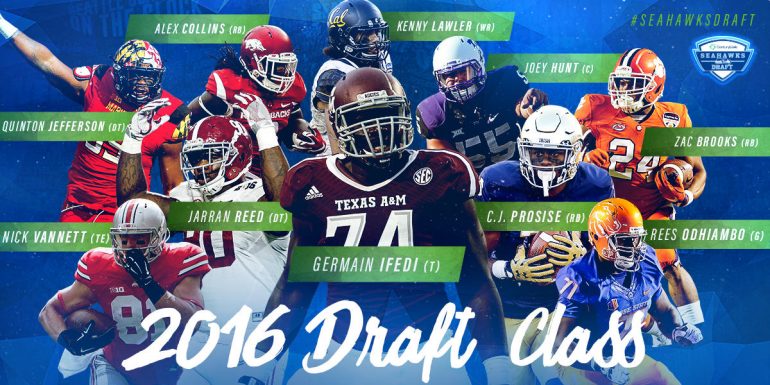 The Morning After: Seahawks 2016 Draft Complete Nobody can say how good this Seahawks draft will be. We can say, with some certainty, what the Seahawks intent was. Eight offensive players selected. Eight players chosen who either block for the run, carry the ball, or stop the opponent from running. Three running backs taken, two of which are former receivers. Three offensive linemen added, all of which could wind up on the interior. This draft was like a core strength workout at the gym. You may look exactly the same walking out as you did walking in, but the next time someone runs into you, they are gonna feel it.

Goodbye Marshawn Lynch, hello everyone else

Nobody can accuse the Seahawks of taking the retirement of Marshawn Lynch lightly. Many would have understood if the team took just one running back in this draft. The fact that they took three means there will be a competition at this position this franchise may never have seen before. It is often difficult for four backs to get enough reps in training camp, let alone six. Part of that will be solved by allowing Thomas Rawls to rest most of camp and recover fully from his ankle injury.

Some will be concerned that this draft indicates the team is worried about his recovery. While a fully healthy Rawls may have had some impact on how many backs Seattle chose, I do not believe his injury was as big of a factor here as it might appear. If anything, I would say this draft should put Christine Michael on notice. There is nothing close to a guarantee that he will make this roster. Alex Collins is a direct threat to him. Collins is a big back with some great lateral agility. His fumbling issues are something Michael can empathize with. Michael showed great awareness of his problem when he came back late last season and earned the right to be the early favorite for the backup spot. Collins is here to make sure he does not regress, and enjoys the advantage of being 21 years old with four years of club control in front of him.

C.J. Prosise and Zac Brooks are more targeted as third down backs, even if Prosise has the potential to evolve into more than that. Both Brooks and Prosise were former receivers. The difference between the two is that Prosise can run inside, where Brooks is strictly an outside runner, who can run the occasional draw. The coaches clearly wanted to add some pass-catching talent to the backfield. The concept makes sense as a receiving threat there can be a useful countermeasure to a pass rush. A challenge will be Russell Wilson’s odd inability to throw a reliable swing pass. The guy can hit a receiver in stride 50 yards downfield, but he has a heck of time hitting a running back five yards away. The hope would be these two picks, especially Prosise give the team an excuse to work on those routes.

Brooks brings 4.32 speed with him to the party. There are not many home run hitters in a Seahawks backfield that tends toward heft. It will be fun to see if Brooks can seduce the coaches with his speed.

John Schneider and Pete Carroll were asked yesterday which pick they were most surprised to get at the spot they got him. Both responded simultaneously and immediately with one name: “Jarran.” The Alabama defensive tackle was a player they had rated pretty highly in the first round, and was someone who they believe is the best run defender they have seen in a long time. That is high praise.

Reed is a good bet to be in the defensive tackle rotation from the beginning, and may very well be the starter at nose tackle when the season begins. Everything about him screams longtime Seahawk. Guys in that role do not often make flashy plays, but we can only hope he has a sack dance that approaches Brandon Mebane’s belly roll.

Germain Ifedi is highly likely to get a spot on the line as soon as this year. As a rare first round pick for Seattle, Ifedi has a fifth year option the team can choose to pick up. It takes a special kind of chutzpah to buy a Seahawks offensive lineman’s jersey, but it is a good bet that Ifedi will be around for a while.

Nick Vannett is here to replace what Zach Miller did for Seattle a few years ago. Blocking at that position tends to be easier to project from college to the NFL than many other skills, especially for a player who played at Ohio State. If the Seahawks believe he was the best blocking tight end in the draft, and Tom Cable now gets to work with him, it is safe to assume Vannett is going to be here for years to come. The fun thing with Vannett is that he has what appear to be terrific hands, so don’t be surprised if he winds up making those catches Anthony McCoy tended to drop.

Prosise might just be the most popular jersey to come out of this draft. He is a fascinating blend of offensive talents, and could create a perfect dynamic duo with Rawls. The great thing about running backs is that they show up right away. It is rare for a runner to need a year to develop. He will need to prove he has command of the playbook and can handle protections in order to get on the field, but once the rock is in his hands, the magic can happen right away.

Something slipped from a Seahawks scout while he was busy complimenting Reed. He said that part of what made Reed so good was that he was going against one of the best center prospects they had seen in years everyday in practice. That would be Ryan Kelly. The team will never say it, but their ideal first round pick would have been Kelly. Adding someone like that to the middle of their line would have allowed everyone to breathe a little easier. It was not close to happening, as Kelly was drafted well ahead of the Seahawks pick, but the hope had to be that plans B, C, and D at the position might still work out.

They traded up for Reed in the second round, and Nick Martin was picked immediately after. A number of other centers came off the board before the team finally picked Joey Hunt in the sixth round. The team said all the right things about Hunt, with Schneider joking that Cable would not have let them leave the building without Hunt in tow. The truth is that the center position did not fall to them at the right place and time, so they did not force it.

Hunt is undersized, but a tenacious fighter, with the best pass blocking efficiency in the nation, per ProFootballFocus.com. Nobody should bet against him, but it would not be fair to have high expectations either. Seattle will enter camp, as it currently stands, with Patrick Lewis, Kristjan Sokoli, Drew Nowak, and Hunt battling at the center position.  I believe the team wanted to upgrade that position, and I am not sure they did.

The other slightly less critical gamble was on the pass rush side of things. Seattle had a good, but not great, pass rush last season. There are a number of interesting prospects for how that could get better this year, and the team better hope those pan out because they only added one player who projects as having anything to do with rushing the passer. Quinton Jefferson was someone the team felt strongly enough about to trade up in the fifth round to grab him.

He plays a variety of positions along the line, leading to some unfair comparisons to Michael Bennett. A team can never have enough pass rush, and the only thing more expensive than adding pass rushers is adding a quarterback. It is usually a good idea to draft at least two pass rush prospects every year. Seattle took just one this year, and not until the fifth round, and no edge rushers. Guys like Ryan Robinson, Josh Shirley and Chris Clemons should feel emboldened by that.

Watch out for Kenny Lawler. Schneider said he had the best hands in the draft. He comes with size (6’2″) and long arms, and is a decent route runner. It would not surprise me at all to see him become the next practice squad-turned-starter prospect for the Seahawks. Guys like Kasen Williams, Kevin Smith, and Paul Richardson have a big head start, but something about Lawler piques my interest.

I judge drafts on two main characteristics: (1) how many players become starters (2) how many players become Pro Bowl or All Pro. The second part is more important than the first. Difference making players are what separate winners from losers in the NFL. Adding five average or above average starters is always a good thing, but your transcendent players are the ones who determine your team’s ceiling. Seattle has quite a few transcendent players already under contract, and was looking to fill in some quality around them. I think they did that in this draft.

It is harder to discern if any of these guys will ever become elite players themselves. Reed is the best bet. Still, run stuffers are generally not as valuable as other roles even if they are the best at what they do. Ifedi certainly has the athletic ability to be one of the better linemen in the NFL, but he has a long way to go to reach that potential. Prosise has a potential Pro Bowl running back in front of him, but has the skill set to possibly be a great featured back himself one day. Collins is another guy who could emerge if things fall the right way.

This draft class will have a tough time competing with the early Schneider classes that were littered with spectacular players at flashy positions. This is the lunchpail gang. Their names may not get mentioned much when fans are recounting the latest Seahawks victory, but their strength and grit could very well be what allows the Seahawks stars to shine a bit brighter for a while longer.