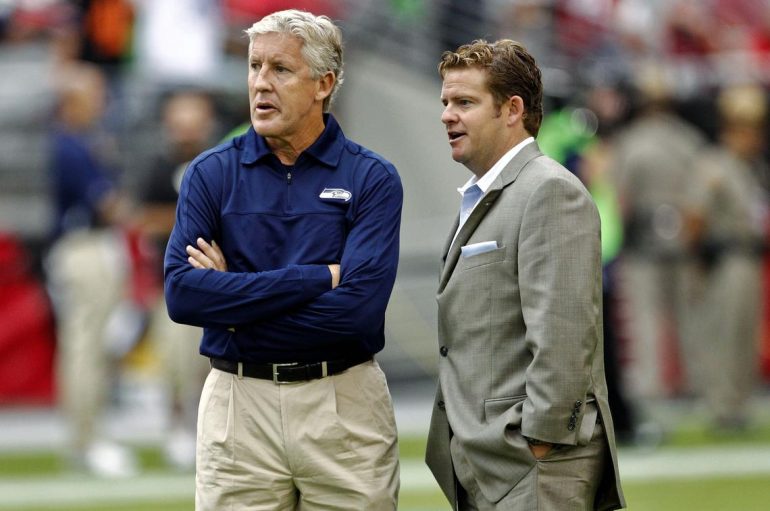 Kam Chancellor attended camp and had been fully participating in the offseason program. Michael Bennett came to mini camp and has given no indication that he will hold out during training camp. The players are doing their part to reduce distractions and focus on building another championship team. Now it is time for Pete Carroll and John Schneider to put their names on the dotted line and eliminate a potential distraction before it happens.

Carroll has been coy about his contract status, simply repeating the statement that “I’m fine. Thanks for asking.” If he thinks that will avoid his situation becoming a distraction, he is wrong. Nobody is more important to the success of this organization than Carroll. Should he not sign before the season starts, it sends a signal that either this is his last season in Seattle or that he is retiring. The latter seems pretty unlikely.

It is possible that Carroll intends to get to the end of his contract and then reassess before committing. That is his right, but to think that won’t have an impact on his coaching staff and his team is naive. Better to clarify his future plans and remove all doubt than leave things murky.

Schneider’s status has been even more shrouded in mystery. Nobody seems to be talking about the fact the his contract ends after this season as well. The potential 1-2 punch of Carroll and Schneider leaving would be close to catastrophic. This team has been formed around Carroll’s philosophy and the talent accumulation has been nearly unprecedented under Schneider.

It would be too simplistic to assume this is the responsibility of Carroll and Schneider to resolve. They may be ready to sign new contracts but are not getting engagement from Paul Allen’s side. For Seattle fans not familiar with the goings-on of Allen’s other pro team, the Trail Blazers, there have been a number of moments where GMs, coaches and other adored team employees have been surprisingly let go.

Just last week, the Blazers let long-time announcers Mike Rice and Mike Barrett go. They were beloved by many fans in Portland, and the way it came down was pretty shocking for a lot of people. A little further back, Kevin Pritchard, a well respected general manager was fired after constructing a team that included Brandon Roy, LaMarcus Aldridge and Greg Oden, among others.

It would be sensationalistic to suggest Allen wants either Carroll or Schneider (or both) gone, but it would be naive to ignore the possibility. Allen is the richest owner in sports and there is no salary cap for coaches or general managers. If he wanted these two signed, and they wanted to be signed, they would be signed.

Fans have no way to know why we are in this situation, but make no mistake, this is every bit as critical as the Russell Wilson contract talks last year. All parties involved would be wise to resolve this before training camp.