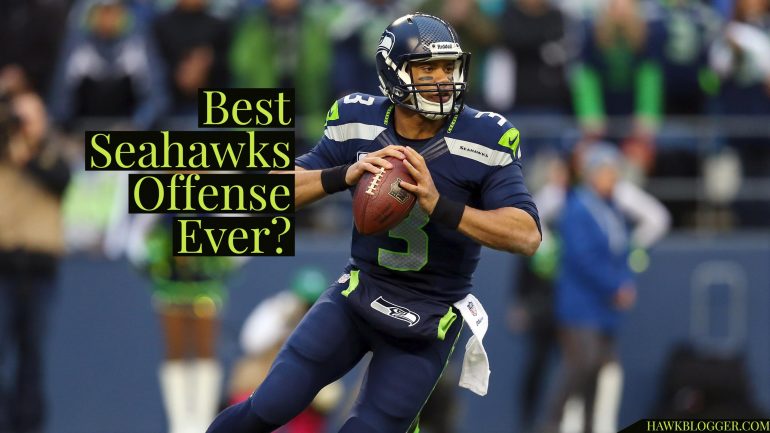 Why I See Big Things Ahead for Seahawks Offense

This Seahawks offense will be the best in franchise history. I did not believe that before two preseason games that saw the first team offense score a grand total of zero points and the team average just 14 points per game, so you may ask how I could possibly feel that way now. Preseason is prestidigitation.  It is easy to focus on the wrong things and miss the ones that truly matter. All the things we are accustomed to pay attention to in a normal football game do not apply in the same way. That may have never been more true than the first two games of this Seahawks preseason.

It amazes me that anyone could possibly watch Wilson in a preseason game and think it might indicate he is going to be anything less than the player he has been the past few years. This is a guy coming off his best passing season as a pro.

How a guy can put up numbers this good when it matters, but have people worrying at all about preseason snaps that do not matter is puzzling, to put it mildly. Wilson’s poor play in the preseason is also overblown. He looked terrific in leading the team down the field in the first game before throwing an uncharacteristic interception. Wilson has never thrown more than 10 in a season, so there is little reason to think that play was an indication of anything worrisome.

He then made some great throws in the second game, only to be undone by penalties and some judgment mistakes that led to sacks. He has already proven over the final eight games of last season that he can be decisive and be smart about getting rid of the ball instead of taking a sack. We will dive more into that in a bit.

The truth is that Wilson has done nothing to indicate he will be anything but the same great quarterback he has been the past few years, and has made some throws that arguably show he could be even better.

The offensive line looks much better

How quickly we forget. The prevailing story coming out of this last preseason game is that the Seahawks pass protection was not great, and that the tackles struggled. Folks, you don’t know struggles. Look back just one year to the first preseason game against the Broncos. Wilson was sacked two times in four (!!) dropbacks. Pressure was coming from everywhere. Things were so bad that the team dramatically changed their starting line between the first and the second game.

It was not just pass protection. The run blocking was almost as bad. Four running backs combined for 77 yards on 23 carries for just 3.3 yards per carry. It did not get any better in the second game against the Chiefs where the team totalled 78 yards on 25 carries for only 3.1 yards per carry. Even the third game, when the starters played into the 3rd quarter, running backs had 94 yards on 24 carries for a 3.9 average. They could not run inside. They could not run outside.

This year? Christine Michael is averaging 5.8 yards per carry through two games against two strong run defenses. The only player who averaged less than 5.0 yards per carry in this last game was Alex Collins. They piled up 186 yards on the ground, and raised their overall average for the preseason 5.0 yards per carry. Watch the tape. Watch the push. See the holes being opened. They are undeniably better at running the ball so far this preseason.

The interior of the line has gone from being a weakness to being a strength. That was far from a given when the preseason started. Justin Britt is new at center. Both guards are entering their first years as starters. Many of us were hoping Britt would just avoid being a liability. He has looked anything but so far. There is no doubt he will still struggle at times in pass protection given what I have seen in 1v1 pass rush drills during training camp, but he may be dominant in the run game and far better than he has been in pass pro.

It appears that the Seahawks are significantly better at two of the three interior line positions than last season. Germain Ifedi very well may be better than J.R. Sweezy as well, but let’s give the rookie some time before anointing him. He definitely does not look worse.

I entered the preseason braced for the interior line to be a mess, even though they had looked good in training camp. Based on what I have seen so far, I don’t think it is out of the question that this group of interior linemen could become the best guard-center-guard trio the franchise has seen. That honor goes to Steve Hutchinson, Robbie Tobeck and Chris Gray for now. None of these current guys look as good as Hutchinson, but all could be better than the other two players from that 2005 squad. Scoff at that now if you want. Get back to me once the games start counting.

That 2005 line excelled at interior running plays, which translated into great success in 3rd and short and goal line situations. It also helped the team gain great yardage on first down to put them in better positions on second and third downs. It was among the most efficient offenses the team has had, and the interior line play was a big part of that.

Bradley Sowell and Garry Gilliam have played both games so far at tackle. They have not looked as strong as the interior. You will see no claims of comparison to Walter Jones and Sean Locklear from that 2005 line here. Neither of these players, or yet-to-play J’Marcus Webb, merit a lot of excitement. Gilliam is an undrafted free agent who is a converted tight end. Sowell was a one-time below average starter for the Cardinals. Webb is a journeyman who has been middling at best at each stop.

It is no accident that the Seahawks front office and coaching staff invested more in their interior line. Every Seahawks fan remembers Kawann Short and Aaron Donald wreaking havoc last year.

Wilson can’t do much to avoid interior pass pressure. It happens too quickly and blocks passing lanes. Wilson is among the best in football at dealing with pressure coming from the edge.

First, it takes longer to get there. The quicker passing game the team has incorporated makes it extremely difficult for edge rushers to get home. Second, Gilliam is not an unknown quantity. He started every game at right tackle last year. He was not perfect, but the team functioned wonderfully with him at that position.

Third, Britt was a disaster in pass protection at right tackle in 2014. That did not keep the team from reaching, and nearly winning, the Super Bowl. Fourth, even if Russell Okung was an above average left tackle, he missed enough time that the team had to make due with the likes of Paul McQuiston, Alvin Bailey and others at that position during key stretches.

Gilliam has not been great so far in preseason. Sowell and Webb are not Pro Bowl candidates. That is not the debate. The real question is whether their play will stand in the way of a successful season for the team. I’m not seeing it so far, unless Gilliam has somehow regressed in his second season as a starter. That usually only happens with players who report out of shape or have a questionable work ethic. Neither apply to Gilliam. The most likely outcome here is that the tackles will be average or below average and that it will not have a major impact on the team’s fortunes.

If Wilson continues to embrace the quick passing game, the need for great tackle play diminishes. The front office and coaching staff see that. Many fans and media have yet to.

Seattle scored 32 ppg, converted 56% of their 3rd downs and 69% of red zone attempts over the final eight games of last season. Even after the loss of Jimmy Graham, Thomas Rawls and Marshawn Lynch, the offense flourished. Rawls appears ready to pick up where he left off and Graham is expected back early in the season even if he is unable to play the first few weeks.

Gone are Fred Jackson, Bryce Brown, and Derrick Coleman at running back. In their place, an electric Michael and intriguing C.J. Prosise step in. Nobody can replace the mentality or style of Lynch, but there is reason to believe this group of runners could be more productive together than Lynch and his supporting cast ever were.

Doug Baldwin returns at receiver after leading the NFL in touchdowns. Tyler Lockett enters his second year, with every indication that he will continue to be an impact player. Jermaine Kearse is back as well after his best season as a pro. Ricardo Lockette was the fourth receiver in 2014 and 2015. Paul Richardson offers far more upside and polish as a receiver than Lockette ever did.

People have asked me why we are not seeing more of him this preseason, and my response is, “Just wait.” He will not be a central part of the offense. No fourth receiver ever is. He will cause problems for defenses and make impact plays.

Beyond Graham, the team has Luke Willson, Nick Vannett and Brandon Williams at tight end. Williams is going to play a key role in both the run game and in pass protection. Those who remember the critical contributions of Ryan Hannam in 2005 and Zach Miller in 2013 know what a good blocking tight end can do for an offense.

Vannett offers more of a dual threat than the undersized Cooper Helfet. He is a solid receiver and capable blocker.

The parts of the preseason that matter

It is hard to watch the offense struggle in the preseason. Nobody likes to see sacks or dropped passes or three and outs. The important thing to remember is that it is a regular season doppleganger. It looks a lot like regular season football, but it is something totally different.

Game 3 of the preseason is supposed to be most legit, right? Wilson threw 2 picks and had 0 TDs in game 3 of 2013 preseason vs GB. #chill

It would be fun if the team dominated preseason this year the way they did in 2013 so the buzz could build with every game. That’s all it would be, though, fun. The things that really matter this year for determining Seahawks regular season success on offense are:

If I was to break that down further, I’d put interior offensive line play over edge line play in both #3 and #5. Things are looking pretty good on those fronts. In fact, the only area that is less than stellar would be tackle play in the passing game. I detailed above why that is not really unexpected or a major issue. Consider that Wilson has been sacked four times in two games and three of those sacks were not the fault of the line.

None of this means the players or coaching staff should be satisfied. We know they are not. Carroll has assembled one of the best teaching and developmental coaching crews in the NFL. Give them quality talent, and they will maximize it. There were questions entering the preseason about how much quality they had along the interior line and whether this group could run as effectively as they have in the past. All signs point to positive answers on both.

The questions that remain are whether the coaching staff can sharpen the execution in these final two preseason games and whether Wilson can continue to embrace the quick passing game as he did in the second half of last season. Those seem less like questions, and more like certainties. This offense will be more than fine. It will be among the best this franchise has seen.