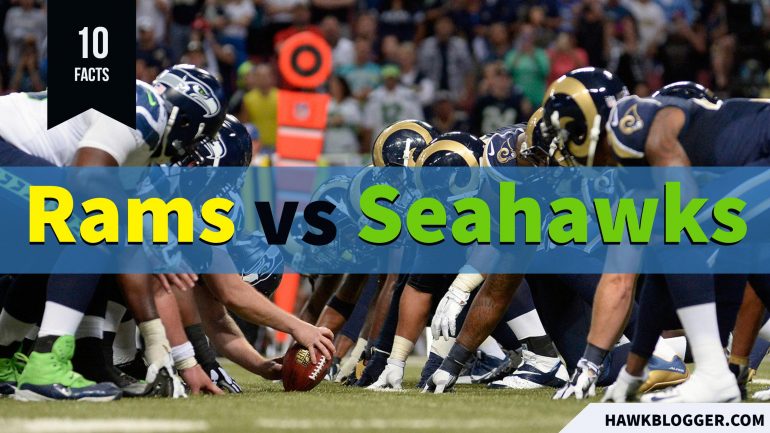 10 Facts You Should Know About Rams vs Seahawks

Neither the Seahawks nor the Rams had a game they were particularly proud of to open the season. Seattle needed 59 minutes to score 12 points. Los Angeles needed 60 minutes to score none. No matter how bad the Rams looked versus the 49ers, many Seahawks fans are braced for the worst this coming weekend against a team that has made life difficult since Jeff Fisher took over as head coach. The phenomenon has reached near mythical status, even though oddsmakers seem unconvinced. Consider these facts as we head into a pivotal game for both squads.

Fans are not imagining that Seattle has a tougher time with the Rams than pretty much any team in the NFL since 2012, when Fisher came aboard. The Rams have beaten the Seahawks at least once in every season except for the 2013 year. Even that year, the Seahawks were fortunate to escape with a 14-9 win that included a Golden Tate “wave goodbye” taunt on an 80 yard touchdown catch and a nail-biting final play near their own goalline that Brandon Browner broke up to seal the victory. Seattle was outgained 339 yards to 135 yards in that game and Russell Wilson was sacked 7 times.

The only teams to have a winning record against the Seahawks in this stretch are ones who have played them once and came out ahead, like the Indianapolis Colts or the San Diego Chargers. Of teams that have played them more than once, only the Rams, the Lions (1-1), and the Dolphins (1-1) have managed a .500 record.

Fisher has so far stuck with starter Case Keenum despite an eyesore performance in the opener. Should Keenum get the start against the Seahawks, he will become the first Rams quarterback to start two games against Seattle since Sam Bradford during the 2012 campaign. During that time, the Rams have started Kellen Clemens, Austin Davis, Shaun Hill, Nick Foles, and then Keenum.

Eight games. Six different quarterbacks. Davis had the most efficient start with a 132.3 passer rating on 17-20 passing and 2 TDs/0 INTs. Foles had the more productive passing game with 297 yards in last year’s season opener.

3. Keenum threw for more yards against the 49ers this week than he did when beating Seattle last year

Many Seahawks fans had to feel a little better about the Seahawks chances after watching how poorly Keenum played on Monday. The truth is, Rams quarterbacks have not always had to play very well in order to win. Keenum threw for more yards (130) and completed more passes (17) against the 49ers than he did when he beat the Seahawks in Seattle last year (103 yards and 14 completions).

Read that again. The Rams beat Seattle last year with a QB who threw for 103 yards, and the game was not really all that close. The Rams were up 16-3 at halftime and 23-10 until the final minute. Davis only had 155 yards passing when he led the team to victory in the 2014 opener. Clemens threw for 158 yards, with no touchdowns and two interceptions, but still had his team within a few yards of winning. Bradford posted a 63.3 rating and won.

4. Seahawks are 4-1 when they get at least one interception

Even if volume passing is not required for a Rams win, taking care of the football is a key factor. The only time the Seahawks picked off a Rams quarterback and lost was back in 2012 when Russell Wilson tossed three picks of his own as a rookie. More important than being productive is being protective as a Rams quarterback in this series.

5. Johnny Hekker has as many TD passes as Bradford, Hill and Clemons combined

Special teams has played a huge role in this series with Fisher at the helm. He punked the Seahawks with a fake field goal in their first game with holder Johnny Hekker finding a player who the Seahawks thought was leaving the field for what became the game-deciding touchdown.

They badly fooled the Seahawks special teams again the next year with a trick play punt return that went for 80 yards and a touchdown in a game they wound up winning by two points. Tavon Austin had a 75 yard punt return in the opener last year in a game the Rams won by three points.

Seahawks special teams coach Brian Schneider has been severely outmatched in this series. Special teams play will not be the first thing on most people’s minds this Sunday, but history shows it very well may decide the outcome.

Many Seahawks fans are understandably nervous about their hobbled quarterback going in to face this badass Rams defensive line. Aaron Donald and crew have sacked Wilson more than any other team since he came into the league. What may surprise folks is that Rams sacks have not been as much of a factor in determining the outcome of the game as one might think.

Seattle has won games when Wilson has been sacked 7 and 6 times. Clearly, nobody in Seattle wants to see Wilson get knocked around that much, but the impact of that Rams pass rush on the game may be overstated. The Seahawks showed signs of a promising pass rush against the Dolphins (5 sacks), which could play a much larger role if it shows up against LA.

7. Seahawks have averaged fewer rushing yards in wins than in losses

The logical assumption is that the Seahawks must establish an effective running game this weekend to keep pressure off of Wilson. The numbers do not support that theory.

Starting fast is not a great indicator of how the game will turn out when these two teams play. Not only does scoring first have no discernible positive impact, but neither do the scores after the first quarter or at halftime.

The Seahawks are 1-2 when leading after one quarter, and two of their four wins have come when trailing at halftime

Seattle has only been ahead at halftime twice, and won both those games. You really need to get to the third quarter to have a good idea of who will win these games. The team leading after three quarters is a perfect 8-0 in this series.

So much attention is paid to Wilson versus the Rams defense that the true indicator of victory is missed. It has been the Rams offense, combined with their special teams, who have led their team to victory. The Seahawks defense has had every reason to dominate this matchup. They are the top scoring defense in the NFL over this span, and have managed to allow 26 points per game in Los Angeles victories.

The 49ers made the Rams offense look the way they should against the Seahawks. Los Angeles was the worst team in the NFL last year at converting third downs (26%). They were just 3-15 against San Francisco. Somehow, though, they managed to convert nearly 48% of their third downs against a Seahawks defense that ranked near the very top in preventing those conversions last season.

That simply cannot happen if the Seahawks want to win this game.

Seattle struggled to force turnovers last year and came away without one to start the season against Miami. The Rams turned the ball over twice against the 49ers, leading to fourteen points. Finding ways to create turnovers will be a key to the Seahawks hopes of winning the latest chapter of this bizarre series.