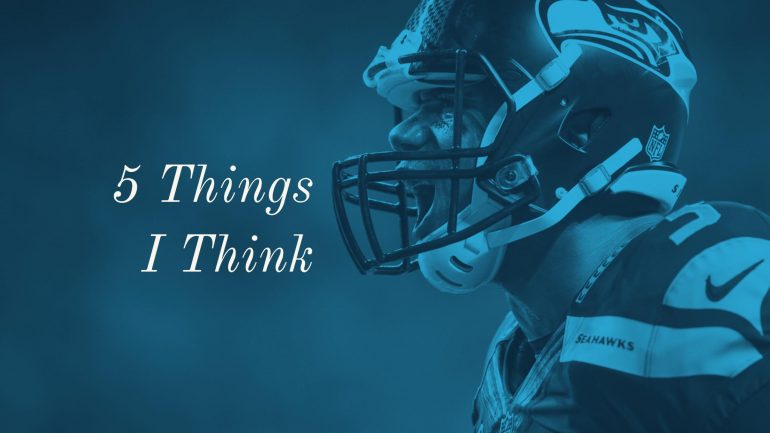 5 Things I Think After Week Three

Players continue to shuffle in and out of the Seahawks lineup. The offense goes from scoring 3 points to scoring 37 points in one week. Russell Wilson appears to be on a mission to injure every joint in his leg. This season is just getting started, but the storylines surrounding the Seahawks are already plentiful. These are a few that have my attention.

1. Russell Wilson injuries may have a silver lining

Early word is that the Seahawks expect Wilson to play this Sunday against the Jets before they head into their bye week. Anytime your franchise quarterback is hurt, it is nerve-wracking. Wilson, in particular, can be concerning due to his competitive nature which can lead him into harm’s way. There are a few potentially positive outcomes from the injuries he has suffered. First, coaches will stress even more the importance of getting rid of the ball quickly. Wilson has already improved exponentially in this area, so this will be more of a solidification of a lesson learned than a new skill. Second, we can hope that he shows an increased willingness to throw the ball away to avoid contact and negative plays. One could argue both sacks he experienced last week, and the tackle that injured him, could have been avoided by throwing the ball out of bounds and living to fight another day. He has always pushed the limits of keeping plays alive. That is a great skill. Knowing when to avoid a negative play and a hit is something he still needs to work on.

Third, the toughness he is exhibiting by playing through these injuries is terrific. Many players on this team still remember Tarvaris Jackson playing through a torn pectoral muscle during the 2011 season. That earned him all sorts of respect in the locker room. Wilson does not need any more respect, but it can only help for his teammates to see him demonstrate his toughness every game, every play. Brett Favre famously played through numerous injuries. There is nothing quite like a finesse position like quarterback picking himself up off the ground and soldiering on to inspire a team.

The rookie first round pick may play this week after missing the first three games due to a high ankle sprain. It would not be a shock to see the team choose to hold him out one more week so he can get the bye week to fully heal and avoid getting his first start on the road against a ferocious defensive line. All indications thus far, though, are that Pete Carroll expects his youngster to play. That would be a terrific addition for this offense both because it would add a player who has shown a ton of promise during training camp and the preseason, as well as remove a guy in J’Marcus Webb who has been one of the biggest problems on that line through three games.

Some, though, have piled too much weight on the shoulders of Ifedi. His absence absolutely contributed to the team’s slow start on offense, but the results may not have been that much different even if he had been there. He is a player who should get considerably more push in the running game than Webb, and should be at least his equal in pass protection. Where we should expect to see some problems are with holding penalties and false starts. Ifedi has at least a few penalties during the preseason and has yet to play a regular season NFL game. He will make mistakes like all rookies do.

The hope is that those mistakes will be few, that between them will be examples of sometimes dominant play. The middle of that offensive line was terrific when Ifedi was in there, especially in the run game. Facing a Jets team that is among the toughest in the NFL to run on would be a great barometer of what Seahawks fans can expect the rest of the year.

3. The return of the deep ball is a good thing

One of the best signs of the past two weeks was the willingness of Darrell Bevell to dial up and for Wilson to throw the deep ball. This was a staple of the offense back in 2013 when they had guys like Golden Tate who Wilson trusted to either catch the jump ball or knock it away from defenders. Wilson has five passes of 30 or more yards in the past two games. He would have at least one more if Tyler Lockett was not called for a questionable offensive pass interference against the Rams.

To put that into perspective, consider that the Seahawks had just ten such completions in the first eight games last year. They finished with 22 passes of 30 or more yards last season. If Seattle were to maintain their pace of the last two games the rest of the year, they would end up with 38 of those passes this season.

It is worth noting that it takes multiple factors for these plays to happen, including an offensive line providing enough time to allow the play to develop.

4. Mike Morgan is a starter in name only

Oakland paid a lot of money to pry Bruce Irvin away from the Seahawks. Through three games, he has 10 tackles and 1.0 sack. Mike Morgan won a pretty mundane battle for the starting strongside linebacker job to replace Irvin, at least for that part of his role. Some fans were more concerned about this transition than others. Nobody doubts that Irvin is a far more talented player than Morgan. The comforting thought all along has been that Morgan would not be out on the field that much due to how often the Seahawks deploy their nickel defense. That has proved to be true.

Morgan has played only 32% of the defensive snaps so far, which ranks fourteenth on the team. Tony McDaniel is right above him at 35% of the snaps, and Cassius Marsh is coming on strong below him after getting 14 snaps against the 49ers compared to 16 snaps in the first two games combined. Marsh played one more snap last weekend than Morgan.

Jeremy Lane has played 68% of the snaps, which perfectly mirrors Morgan’s playing time. The estimate has been that the Seahawks play nickel roughly two-thirds of the time, and that has held true to this point.

Lane got the big contract this offseason, but it is Shead who has played 100% of the snaps so far this year. He got slack last week for giving up a number of catches to Kenny Britt. I continue to think that was overblown, but even if you were upset with his play in that game, it would be hard to be anything but excited about the way he has played through three weeks. He will get a good test this weekend versus a pair of quality wide receivers in Brandon Marshall and Eric Decker.