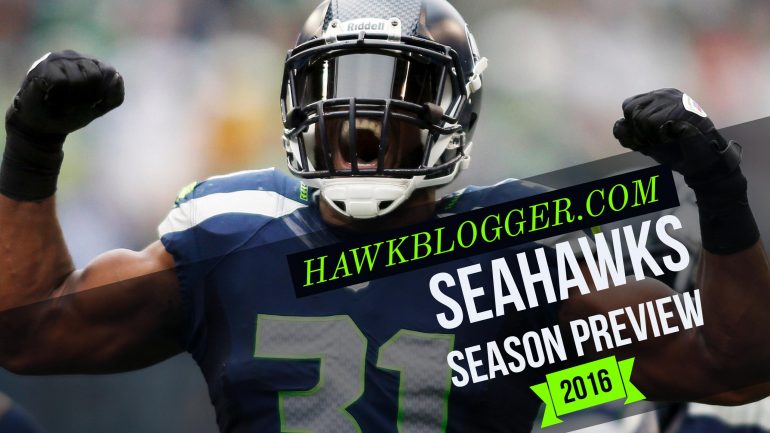 Just three years ago, the Seahawks had never won a Super Bowl. They were a chic pick to win their first, and for once, the trendy pick was the right one. Seattle raced out of the gates to an 11-1 start on their way to a 13-3 season before slugging their way through a tough NFC to face the record-breaking and completely overmatched Denver offense in Super Bowl XLVIII. The would become one of the youngest rosters to ever win a ring and appeared poised for a lengthy run atop the NFL. After falling a mere yard short of their second consecutive ring and then getting manhandled by the Panthers in last years playoffs, this still young group will need to follow a path less traveled to ascend into the ranks of the league’s memorable dynasties.

What qualifies as a dynasty?

This is a purely subjective question in NFL terms. Dictionary.com defines the term this way:

Dynasty — a sequence of rulers from the same family, stock, or group; a series of members of a family who are distinguished for their success

Time is an important aspect to achieving a dynasty. Most fans would say a team would need to win at least three rings in four or five years to qualify as an NFL dynasty. Teams like the Broncos won two straight in the late 90s, but I don’t think anyone outside of Denver would consider that a dynasty. The Washington Redskins won three Super Bowls in ten years during the 80s and 90s, but each at least four years apart. Throw in one more during that run and it probably qualifies.

The Patriots are in interesting study in that they won three rings in four years, and then did not win another for ten years even though they appeared in two more Super Bowls along the way. Their most recent victory effectively extended their dynasty across that whole span in most people’s minds since the coach and the quarterback were consistent across the run.

That speaks to the other aspect of dynasties, which is the people involved. Coach is probably the most important element, but would anyone deny the 49ers dynasty status in the 80s and 90s because Bill Walsh gave way to George Seifert? I don’t think so. Quarterback is the next most important stability figure. Even then, Joe Montana gave way to Steve Young. There is some intangible aspect to what makes a run of success part of the same thread as opposed to a new one.

At the risk of greatly oversimplifying, I’ll put forth this definition of an NFL dynasty:

Who are the NFL dynasties?

Using the definition above, we find four franchises who have enjoyed dynastic runs atop the NFL.

This group won four Super Bowls in six years and featured the same coach, quarterback and defense throughout.

Walsh and Montana helped the franchise break through for their first ring in Super Bowl XVI and then waited a couple of seasons before winning their next. It took three seasons after that to win their third. Had they stopped their, they would not have qualified. Instead, they won the following season to secure their fourth ring in nine years. They won one more during the 1994 season that was connected by Seifert and Young and Jerry Rice, among others. This was the longest stretch of championship level play for one franchise in NFL history.

Jimmy Johnson, Troy Aikman, Emmitt Smith, Michael Irvin and others combined for a dominant fun of three Super Bowl wins in four years. They were the primary reason the 49ers did not have more rings during their run.

This crew did the three rings in four season feat that the Cowboys did. That qualified them as a dynasty right there. They appeared in five Super Bowls in eleven years, losing two. Bill Belichick and Tom Brady are the key cogs connecting the first ring to their most recent despite a ten year drought. They also won 13 division titles in 15 seasons. The 49ers won 12 division titles in 15 seasons. Were they to win one more ring together, this run would measure up with the 49ers’ of the 80s and 90s.

Where the Seahawks stand

Seattle won their first Super Bowl is Russell Wilson’s second season. That puts them in good shape to win multiple rings whether they ever qualify as a dynasty or not.

Many people fail to realize that Brady relied heavily on his defense and running game during the Patriots early Super Bowl run. It was not until his eighth season in the NFL that he became an MVP caliber passer who could carry a team on his back. By most measures, Wilson is ahead of where Brady was as a passer at this point in their respective careers. This past season represented a significant leap forward in Wilson’s development as a passer.

Even with the Seahawks reliance on the run, Wilson averaged more than 250 yards per game passing for the first time. He did that while keeping his interception numbers incredibly low. The second half of 2015 saw him on pace to match Brady’s historic 50 passing touchdown season, were he to maintain that pace for a full season, and he only threw a single interception during that run.

There has been debate about how Wilson will perform as he ages and his legs become less of a weapon. He proved last season that he can thrive in the pocket while making short, rhythm throws, much like Brady.  The reasons to doubt Wilson can be one of the best quarterbacks to ever play the game are quickly fading. His running ability is just an added bonus.

Pete Carroll just signed an extension that will keep him in Seattle for the next four seasons, including this one. He has shown no signs of slowing down and his team has shown no signs of losing faith. He helped lead through a tumultuous two offseasons where the team shed pugnacious Percy Harvin, dealt with a shocking Super Bowl loss, and the holdout of a team leader in Kam Chancellor.

They are more centered as a group than they have been since entering the 2013 season. The loss to Carolina last season was the first time the players believe they have legitimately lost a playoff game since 2012. It was a wake-up call.

Carroll will reassert his commitment to the running game this season despite the retirement of Marshawn Lynch and the emergence of Wilson’s passing prowess. He has what may be his best offensive line to date, and a stable of young runners with significant upside.

Seattle won their first ring in large part due to their ferocious and historic defense. Most of the core from that group is still here and playing at a high level. Earl Thomas, Chancellor, Bobby Wagner, Richard Sherman, K.J. Wright, Michael Bennett, Cliff Avril, and even Tony McDaniel are still around. They are the first team in the last 60 years to lead the league in points allowed for four straight seasons.

They have reloaded with some young talent like Jarran Reed and Frank Clark. The biggest question mark will be their pass rush, and whether guys like Clark can replace the moderate productivity of Bruce Irvin.

A path to legacy

The Seahawks would get back on schedule were they to win another championship this season. Like the 49ers of old, their path will not include back-to-back rings at the start of their run, or even three rings in the first four years.

San Francisco added dominant players to their roster throughout that run. Jerry Rice was not even on the first two Super Bowl teams. Neither was John Taylor or Charles Haley or Bill Romanowski or Tim McKyer or Don Griffin. The list goes on. The 49ers dynasty was built on a core philosophy and the perfect meshing of a franchise quarterback to a head coach.

Seattle has the ingredients for a similar outcome. Wilson and Carroll compliment one another perfectly. Where Walsh was an offensive genius, Carroll has made his mark defensively. Standing alone at the end of an NFL season with the Lombardi Trophy in hand is the ultimate challenge no matter your pedigree. Seattle enters the season as one of the favorites to win their second ring and make their third Super Bowl appearance in four years. Should they accomplish the feat, it would put them one step closer to joining the pantheon of NFL franchises. This Seahawks team is not on a quest that can be achieved in a single season. Their potential demands more.