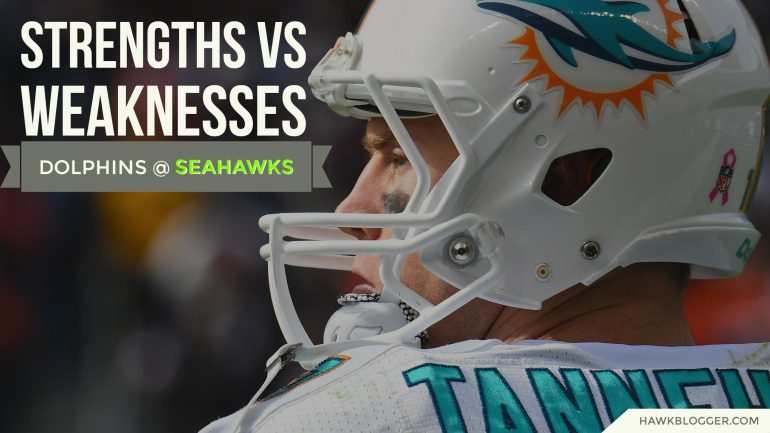 Strengths vs Weaknesses: Dolphins Better Hope They Have Improved…A Lot

Teams change year-to-year in the NFL, sometimes dramatically. The Miami Dolphins have to hope that is the case as they step into CenturyLink Field to take on the Seahawks in the season opener for both teams. This article will breakdown how last year’s teams would match up were they to play on Sunday, and the picture is not pretty for Miami. Given that Seattle is the largest favorite (-10.5) in the NFL this week, oddsmakers are not counting on a totally new Dolphins squad to show up.

It had to be eye-opening to Miami fans to sign a defensive juggernaut like Ndamunkong Suh and see such dismal numbers across the board. The Dolphins defense did nothing well last year, and barely did anything at even a league average level. Some of that can be attributed to the injury that ended DE Cameron Wake’s season after 7 games. The team, though, was 3-4 at that point and had already lost to Jacksonville and given up 41 points the Buffalo Bills.

The injury to rookie right guard Germain Ifedi is a meaningful blow to the Seahawks offense. It is not clear just how big of a blow until we see his replacement (likely J’Marcus Webb) fill in. The Dolphins defensive line is the strength of the team, at least on paper. Expect Miami to try and target Webb both in individual match-ups and in stunts/twists that require proper communication between him and either his center to his left or his right tackle. Communication between those three players will be at its infancy, and ripe for disruption and mistakes.

The Seahawks sack rate was among the worst in the NFL last year, although much of that was built on the back of a horrendous start to the year. Seattle surrendered less than two sacks per game over the second half of the season as the quick passing game took hold. Wilson will need to be decisive in this game to reduce the impact of the Dolphins pass rushers. That said, it remains to be seen just how good the Miami pass rush will be after losing Olivier Vernon to the Giants and replacing him with a seemingly eroded version of Mario Williams and a still-recovering Wake. Interior pressure is the best chance for Miami to give Seattle fits.

Suh helped Miami at least rank 12th in opponent yards per carry, which indicates the run defense was not as bad as the yardage rank (28th) implies. The recipe to challenge Seattle will be to stuff the run on early downs and exploit the right side of the line in passing situations.

That Dolphins secondary is highly questionable. They have some great safety play from Rashad Jones, but the corners are suspect. The addition of former Seahawk Byron Maxwell may help, but he is not a clearly better player than Brent Grimes. Their other corner is new, and their depth at corner is untested. This, coming from a defense that struggled mightily in defending the pass last year.

Wilson and the Seahawks receivers should be in attack mode from the outset. It is hard to see anyone on the Dolphins roster who can cover either Tyler Lockett or Doug Baldwin. Expect Seattle to get into empty sets a lot to find the most advantageous match-ups, and do not be surprised to see the tight end position play a role against the mediocre linebacking crew.

Miami was a train wreck on third downs last season, and the Seahawks were the best in the NFL over the last half of the year. Wilson was at the center of that transformation. If he is on his game, Seattle will be able to overcome any issues with the Ifedi injury. If not, more pressure will fall to the run game and defense, which likely makes this a closer contest. There is plenty of reason to think Wilson will have a treasure trove of options to pick apart the Dolphins defense. Keep an eye out for C.J. Prosise to play a large role in empty sets.

Ryan Tannehill and the Dolphins offense gets a lot of flak, especially from Dolphins fans. It is hard to argue when the team finishes 27th out of 32 teams in scoring and yardage. There is some talent there, though, with the likes of Jarvis Landry and an improving offensive line that cleared the way to a decent run game last year (9th in yards per carry). Running back Lamar Miller is gone, and aging Arian Foster steps in. First round pick Laremy Tunsil will start at guard. That could either be a step forward with fresh young talent, or a step back going against the typhoon that is Michael Bennett in the chaos of CenturyLink Field.

It is also looking like their Pro Bowl center Mike Pouncey will not make it back from injury in time for this game. That could lead to even more problems with the line in a venue none of these players have really experienced. Another important missing element could be receiver Davante Parker.

The Seahawks secondary was only the Legion of Boom in name last year. They did not create a lot of turnovers and often were at the center of key breakdowns that led to untimely third down conversions or scores. Removing the dead weight of Cary Williams and replacing him with DeShawn Shead and Jeremy Lane definitely stopped the bleeding. It did not elevate them back to a dominant unit.

Tannehill and the Dolphins offense will not be afraid to test the Seahawks secondary, especially with Landry in the slot. Tight end Jordan Cameron is also talented and could play a large role against Seattle’s single-high safety defense that can be susceptible to seam routes.

Miami cannot win this game if Tannehill does not play well. He did a decent job of limiting turnovers last year, and may need to be perfect in that category on Sunday if he wants to win.

Well this is the #1 scoring defense in the NFL four years running against a team that was fifth-worst in the NFL in scoring last year, so suffice-it-to-say, there are some clear advantages. Two that might not be obvious are conversion on third downs and in the red zone.

Seattle was among the toughest teams in football when it came to converting third downs last year. Miami struggled there, ranking a terrible 30th in the league. The Seahawks also were tough to score touchdowns on in the red zone (3rd), where the Dolphins had a tough time punching it in (20th).

That will become a real issue for Miami if they cannot establish the run. Seattle ranked tops in the NFL in run defense last season and is arguably better equipped to stop the run this year. Unless the Dolphins line is considerably better than last year right out of the gates, which is tough to imagine due to inexperience and injury, they are going to have a hard time getting yards on the ground. That will make for longer third downs and more pressure on Tannehill. The Seahawks should get chances to create turnovers and make this a long day for Dolphins fans.

Landry is a great return man and should be accounted for at all times. On the flip side, the Dolphins were not good at covering kicks and Lockett could be a big factor as well.

The Morning After: Seahawks faceplant in first round, need changes