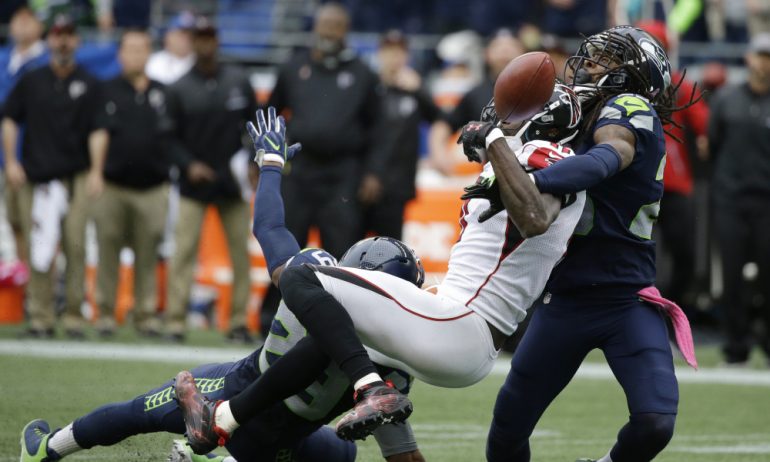 Did NFL Deliberately Change the Clip of Sherman and Julio Jones?

I always look forward to the NFL’s Mic’d up videos. It gives a unique close-up view into the chaotic nature of NFL games. We get to witness immediate player reactions, discussions between opponents, and conversations between coaches and others on the sideline.

On Tuesday night, I just happened to be scrolling through Twitter when I came across the NFL’s mic’d up video for the Seahawks and Falcons game. What I witnessed next left me jaw-dropped.

Notice on final play they edit in a Julio release from early in game when sun out. Sherm not in press. Kinda shady NFL. https://t.co/GReV9YOIJu

Here’s the full Mic’d up video:

Towards the end of the video, as Jared Stanger pointed out, the NFL appears to show the climatic final play to the Falcons’ last drive. However, it’s not as it seems. Watch closely. The NFL deliberately crops a different start to the play (they pull Julio’s jump off the line from a different play in the game), effectively removing the footage of Julio committing a hands to the face penalty against Richard Sherman. So they cropped two different plays together — and attempted to pass it off as the full, final play .

Instead of the above video showing Julio running straight off the line, the following gif is the correct start to the final play:

I understand that the NFL loves to push narratives. This is nothing new. I get it. Controversy creates ratings. It gives fans something to talk about. But this is deliberately and deceptively cropping two different plays together, eliminating Julio’s blatant penalty against Sherman, and then focusing on Richard’s DPI on Julio. Frankly, it’s misleading and it’s deceptive.