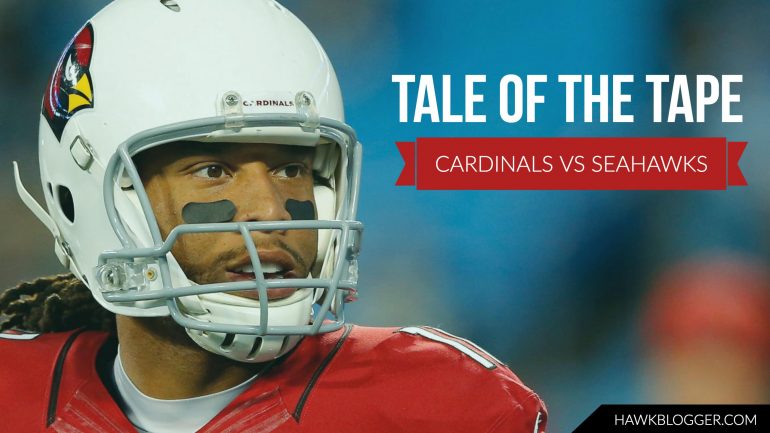 Tale of the Tape: Cardinals Defense Among NFL’s Best

Many people picked the Cardinals to repeat as NFC West division champs and contend for a Super Bowl this year. Their bandwagon has lost quite a few passengers after a 1-3 start that saw Carson Palmer struggle. This game against Seattle represents a pivotal moment in the season for both teams, as a loss would put the Cardinals three games behind in the loss column—and really four games due to the tiebreaker—with a game in Seattle still on tap for later this season. The Cardinals will bring their best to this game. They feature an underrated defense and a dynamic running game. Seattle fans should not expect another easy win in Arizona.

Ordinarily, the Seahawks offense has some key advantage over the defense they are going to face. Not this time. The Cardinals feature one of the best defenses in football. They defend the run, rush the passer, and take the ball away. Arizona ranks 3rd in defensive DVOA, per FootballOutsiders.com. They face a Seahawks offense that is struggling to run the ball and has yet to find it’s stride. Arizona has marquee talent in their secondary. That has helped them create turnovers in the past, and has been made stronger this year by the addition of a healthy pass rush. Their 14 takeaways ranks third in the NFL, and they have had at least one in every game this season. They have held opposing quarterbacks to a 65.8 passer rating, which ranks second among NFL defenses.

Expect them to bring pressure, like always, with the hope that the young Seahawks offensive line will suffer communication breakdowns. Eight of their 18 sacks have come on 3rd and long (7+ yards). They will look to bottle up the Seahawks running game on early downs and force them into those 3rd and long situations.

While the rankings may not bear it out, the Cardinals run defense is probably their biggest advantage. Seattle has been dismal in that aspect of their offense, and Arizona has some disruptive talent along their line. A big part of how the Seahawks have dominated the Cardinals in Arizona the past few years was a healthy running game with Russell Wilson playing a key role. It seems unlikely that type of success will be repeated on Sunday.

Wilson has tortured the Cardinals defense, especially in Arizona. He has had some of his most dominant statistical performances in that stadium. Seattle will need him to do it again. Despite the big name talent and the gaudy numbers for the Cardinals secondary, the Seahawks match up well in the passing game.

Seattle has the ability to play the quick passing game, which neutralizes the pass rush, and likes to exploit defenses down the field when they blitz. Pass protection has been one of the strengths of this offense so far, and the deep ball has been productive. Seattle took fewer shots downfield against the Falcons.

Look for them to get back to some of those deep throws in this game. Paul Richardson could be brought out of hiding to test some of the secondary depth. Jimmy Graham is an intriguing and unpredictable factor in this game.

Arizona ranks 1st in the NFL in defending the tight end, per Football Outsiders. The reality is they have not faced any quality players at that position. The Patriots were without Rob Gronkowski. Tampa Bay, Buffalo, Los Angeles, San Francisco and the Jets are bereft of any dangerous tight end talent. Graham will at least draw a lot of attention.

Tyler Lockett will once again be a major factor in how this game unfolds. He was still not himself this past week. The Seahawks ability to move the ball reliably through the air requires a third receiving threat beyond Graham and Baldwin. Lockett is that guy when healthy.

Luke Willson is out for the first time, which leaves additional opportunities for Brandon Williams and Nick Vannett. Neither player has figured prominently in the Seahawks offense so far, and could provide a chance to catch the Cardinals off-guard. It will also be interesting to see if the Seahawks decide to utilize their elephant package more that they unveiled this week, featuring backup center Joey Hunt at fullback, and 330 pound J’Marcus Webb entering as a tackle eligible.

Assume the running game will struggle, which means Wilson and pass protection become the keys to the offense. He has proven he can eviscerate this Cardinals defense on the road, so it is reasonable to expect a solid performance.

This is usually the battle to watch in this series; a great Cardinals offense tests the best defense in the NFL. Seattle has held up their end of the bargain, but Arizona has scuffled a bit out of the gates. Most surprising is the source of their struggles has been Palmer, some of the talented receivers, and Bruce Arians’ high-flying passing game.

Injuries to the offensive line should further weaken Arizona, but they are coming off a promising outing against a stout Jets run defense. Seattle played the best offense in football last week without Kam Chancellor or Frank Clark. Both players are expected back this week. Chancellor would play a key role in defending the run.
Arizona showed signs of regaining some rhythm in the passing game on Monday. Seattle showed it is not infallible. Whichever side plays better in this game likely determines the outcome. Technically, the Cardinals have no advantages on offense. Even their powerful rushing attack is met by an even more powerful run defense. Mike Iupati and Evan Mathis are out. Backups, including Earl Watford, played well in relief. David Johnson is running roughshod over the league, but has yet to get untracked against the Seahawks. He had just 25 yards on 11 carries last year in Arizona in his only start against Seattle.
Arizona absolutely has to generate a rushing attack in order to unlock their offense in this game. Seattle naturally takes away the deep ball and has one of the leagues best pass rushes. It is hard to imagine the Cardinals having much success without Johnson threatening 100 yards on the ground. If they do that, they stand a good shot at winning.

The pass rush is going to be a headache for the Cardinals all night. Assume that Clark returns. The combination of Clark, Cassius Marsh, Michael Bennett, Cliff Avril and timely blitzes from Bobby Wagner and K.J. Wright is going to give the patchwork Cardinals line fits.

Palmer will have to be good about getting rid of the ball quickly and Arians will have to be willing to eschew the deep ball he loves so much. This is a game where Palmer could get pounded if the running game cannot get untracked. Seattle should have a huge advantage at the line of scrimmage both in the run game and in rushing the passer.

Arizona has self-destructed a couple of times this year when they had 5 turnovers two different times. Seattle has six turnovers all year. Palmer has not been as sharp throwing the ball, as evidenced by the 31st ranked completion rate in the NFL. It will only take a few off-target throws to create a huge advantage for Seattle. The Seahawks offense took advantage of some short fields created by turnovers against Atlanta. It could be more of the same here.

Arizona is missing their normal punter due to injury. His replacement has done a good job with pinning teams inside the 20, but there could be a chance for Seattle to gain some meaningful field position with Lockett in the punt game. Arizona is surprisingly benign in the punt return game. They have dynamic athletes, but is has not translated into good special teams play.