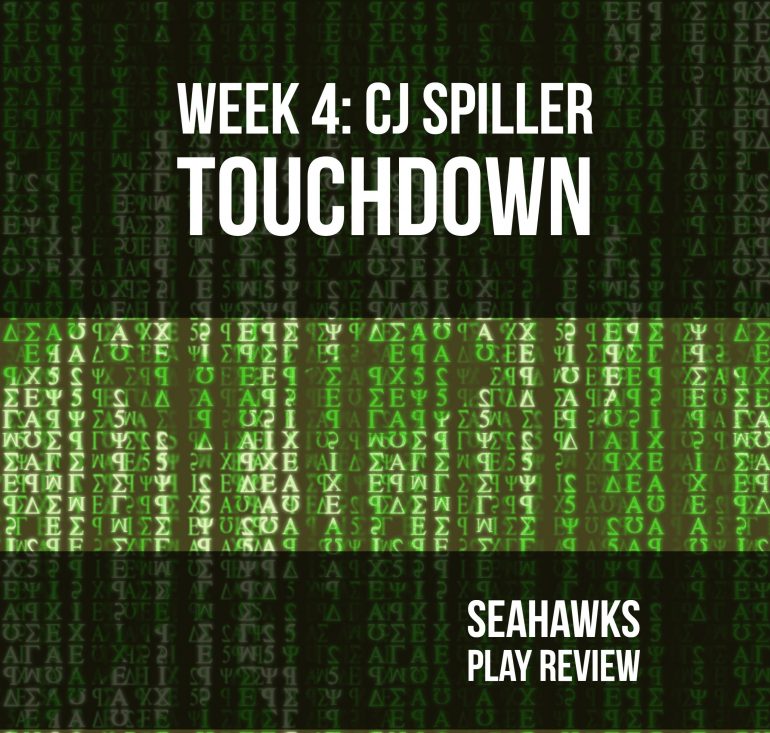 Spiller’s story is great, and based on a few touches against the Jets he should be an exciting addition to this team. But the real hero of this play is Captain Seahawk himself, Russell Wilson.

At the onset, the play looks slightly ominous. Seattle has gone from 2nd and goal on the 3 yard line to 2nd and goal on the 8 after a Luke Willson false start. Seattle huddles up in 11 personnel with Spiller and Graham. Spiller leaves the huddle early and sprint out to the far right hash, only to be immediately recalled by Russ. Watching this live it appeared that Spiller, with only a few days to learn the play book, didn’t know where to line up. Was Seattle about to botch a goal line possession? With hindsight we know that, no, everything is just fine. And, with hindsight and replay, we can see that Russ has just very quickly identified that the Jets are in man coverage as #50, Darron Lee, follows Spiller outside. Seattle motions the running back wide for this very reason and, confirming the coverage, Russell adjusts the play.

After the snap, Russ’ progression starts to his left. Paul Richardson is running a fade and Tyler Lockett is running a 5 yard out underneath. Spiller, now lined up to Russell’s left, is running a Texas route that starts angled to the outside before cutting back up the middle. The three routes take a moment to develop. Coverage on Preach and Lockett is solid. David Harris, however, overcommits to the outside on Spillers’ route. With Spiller breaking in there is a clear lane into the endzone, but there are a few problems. First, Sheldon Richardson has dropped Bradley Sowell in Wilson’s lap. Second, there is a linebacker and safety to the right who are in position to jump the route. Fortunately, Russell is able to kill two birds with one stone. With pressure from his left, Russ rolls to his right. The linebacker and safety, anticipating a scramble, immediately begin to break to their left. Russ is able to both buy time and distort the defense. Russ, now moving to his right, knows he has a touchdown to his left. The only thing left to do is make a ridiculous touchdown throw that only a few other NFL quarterbacks can make.

If you haven’t seen it already, you can watch the broadcast view here. There’s so much about this throw that’s amazing. The arm talent is unreal. Moving to his right, throwing a dart to his left, and putting it in the perfect spot between three defenders. The footwork, to quickly gather himself while on the move so that he has both velocity and accuracy, is superb. And his release, sped up to make up for being late after getting pressured, is a truly elite quarterbacking skill.

My favorite view of the play, however, may be from the endzone camera on the coaches film.

From this angle you can see how intentional Russ is on this play. He’s not rolling right to scramble, or to move on to the receivers on that side of the field. He never loses track of Spiller and strikes as soon as the opportunity presents itself. It’s one of my favorite plays of Russell’s young career. It shows complete command of all aspects of the game, with all of his talent unlocked and on display.