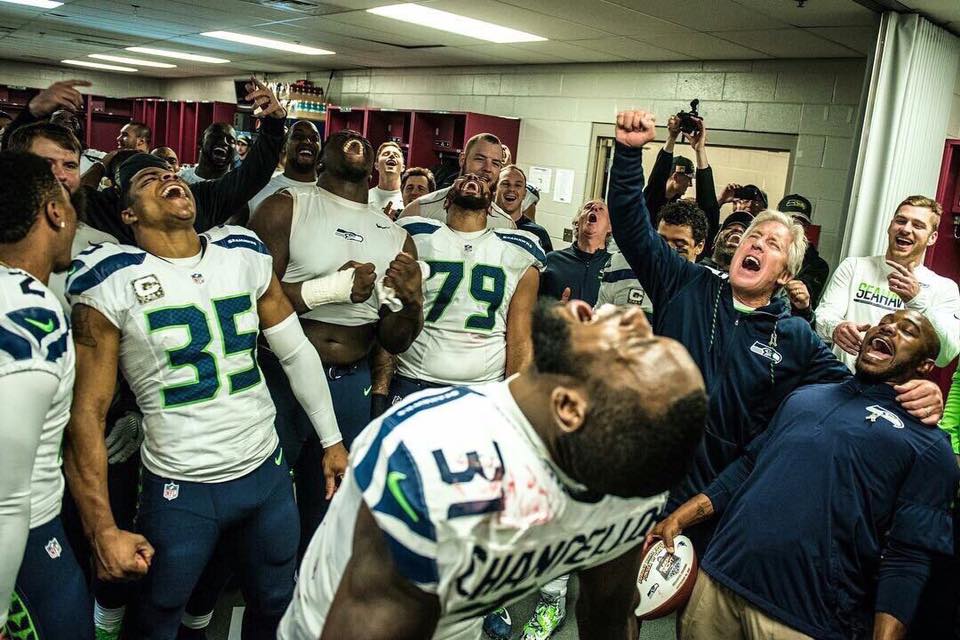 As Sunday Night Football approached, very few media pundits favored a Seattle victory. Over the last two years, the Seahawks had been plagued with the thought of “what if…” What if they had run the ball on the one-yard line? What if they had handed the ball to Lynch? What if they had scored that touchdown? What would their legacy have looked like? The Seahawks turned that fear and remorse into a fiercely starved desire to feast upon the tears of Patriots.

Empowered by dynamic plays on both sides of the ball, Seattle kept New England on their heels. Throwing for 348 yards and three touchdowns with a 67% completion rate, Russell Wilson made Hall of Fame throws. Per Sam Hawkbadger, Wilson’s 124.6 passer rating was the “3rd highest ever posted by an opposing QB in Foxborough in the Belichick era (out of 134 total).” CJ Prosise consistently bailed out the offense. Doug Baldwin caught three touchdowns. Tyler Lockett completed several long clutch receptions. Jimmy Graham made several critical catches. Paul Richardson made the most of his limited opportunities. The offensive line provided Wilson with sufficient time to make plays. Except for some fixable red-zone mistakes, the offense was explosive and consistently moved the chains. They provided the defense with needed rest and kept Brady on the sidelines for as long as possible.

On the defensive side of the ball, the first drive sparked immediate concern among fans. However, the stiff Seattle defense quickly rebounded and held Brady and the Pats to a couple consecutive three and outs. Despite a noticeably absent pass rush (likely in part due to missing Michael Bennett), the Seahawks secondary did a strong job of limiting Brady. The truth is that the Tom Brady led offense was always going to score points. However, heroic efforts and hard hits by the Legion of Boom sparked fear in the hearts of Gronk and other Patriots receivers. On one defining defensive play, Earl Thomas – the miniature heat seeking missile, launched the full force of his body into Gronk. Knocking the tight end to the ground and causing an incompletion, the Legion of Boom was fired up. This time they were healthy.

As fans nervously clutched their seats, this game came down to the wire. Per Mitch Levy, the “Patriots were 102-1 in games at home that they’ve led in the 4th qtr.” That record is now 102-2. Seahawks fans had been in this position before. A close fourth quarter game with the Patriots. A previous nightmare indicated how this show would end. With seconds quickly ticking off the clock, the Patriots were marching decisively.

It was first and goal with 46 seconds left on the clock. Brady snaps the ball. He sneaks it but he comes up short.

Second and goal. Brady hands the ball of to Blount as he attempts to hurdle over the pile of defenders. Kam comes sprinting off the edge and leaps to grab Blount’s legs. This heroic defensive save by Kam very well could have saved the game for the Seahawks. Blount ends up short of the goal line.

Third and goal. Brady attempts to again sneak it at the goal but fumbles the ball. Patriots recover the ball. It’s all coming down to one last play.

Fourth and goal. This is it. The play of the game. Fans stared at their TVs motionless. Hearts skipping multiple beats. Unable to breathe. Brock Coyle is mistakenly isolated with Gronk on the outside. He quickly motions for Kam to switch in coverage. Brock transitions to defend the middle.

It’s a fade to Gronk with Kam in coverage.

Considering the amount of negative press Kam has received over the past couple years, whether it be the holdout or injuries, he made a statement today. With the game on the line versus the NFL’s most evil villains, Kam successfully defended a pass in isolated coverage from the best quarterback in NFL history.

With this win under their belts, the Seattle Seahawks have now completed their first step towards their journey of redemption. Enjoy this ride. It’s going to be a wild one.