One catch. Three yards. And a vulgar celebration. That was Doug Baldwin’s Super Bowl. A player who prides himself on proving doubters wrong, exited the game with less respect than he entered with. It did not have to be that way. His antics before and during the game obscured a story that should have been told. Baldwin was better than Darrelle Revis during the Super Bowl. It is true. Seattle did not take advantage of it. A team that prides itself on dictating the game to opponents willingly went away from the run on the decisive play, and away from their top receiver the whole day. The Seahawks will undoubtedly spend time at the NFL Combine this weekend looking to upgrade their receiving corps. Adding more talent will only matter if the passing game matures enough to maximize it.


See it to believe it

It is well known that wide receivers are more dependent on others to achieve their goals than any other position. The offensive line has to block long enough to allow a throw. The offensive coordinator has to call their number. The quarterback must choose to throw to them and in a location they can reach. When you hear players like Baldwin talking about worrying about what they can control, that is what they mean.
At first glance, it seems impossible to conclude that Baldwin played well in Super Bowl XLIX given his meager stat line. My impression having watched the game was that Revis had shut Baldwin down. It was only after watching the “All-22” of the game that I came to realize how wrong I was, which raised a series of other questions.
Take a look at these plays for yourself (click the images to see a larger version):
Some of these plays worked out with completions to other receivers. There were other moments where Revis covered Baldwin well. The point is not that every throw should have gone in his direction. It is that it almost never went in his direction. Whether it was a lack of trust from Darrell Bevell in the game plan or Russell Wilson in assessing his options, the offense effectively chose to take its leading receiver out of the game. 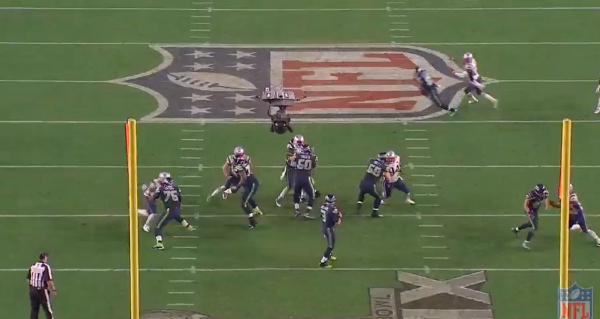 Many of these plays show Wilson looking anywhere but Baldwin’s direction. That may have been the right decision in some cases. Chris Matthews would not have been the factor he was if Wilson was not willing to give a less-heralded player opportunities. The most egregious errors, though, were on third down. These are the moments Baldwin has always shined, and he did again in this game. There were key moments in the third and fourth quarter that would have extended drives that simply were missed.

Pete Carroll, Bevell, and Wilson must use this offseason to reflect on how they can increase the efficiency of their passing attack. Being a run-heavy offense that is lethally efficient in the passing game is the goal. Wilson and Baldwin taking another step toward trust and anticipation would go a long way toward reaching it.

It is easy to see these plays and understand where a player like Baldwin would get upset. Imagine working your whole life to get to this point, beating a player some believe is the best corner in the game, and only seeing one pass thrown your way. Now imagine how many times he probably has reviewed tape of other games where similar performances are lost. This is a player who was not respected enough to be drafted and continues to bump up against a perception of mediocrity. Being frustrated and angry is natural. Somewhere along the way, though, Baldwin has veered off course with how he channels that energy.
View image | gettyimages.com

He made his point last year about the pedestrian receiver corps and had a Super Bowl touchdown and ring to show for it. His bouts with the media this year felt contrived and immature. His vulgar touchdown celebration reflected poorly on him and his team. I believe his actions were intentional, with a goal of raising his profile. The Richard Sherman playbook, so to speak. Sherman, though, can get away with flamboyant and aggressive displays because it is who he is and he gets opportunities to prove himself each week. Baldwin needs to find a way to attain the respect he craves in a more genuine manner.
He is not immature. He is not vulgar. He is not pedestrian. I hope he spends time this offseason reassessing who he really is and how to share that. Taking the time to publicly apologize this week was a promising first step. People will never see the player he truly is if he continues to pretend to be a person who he is not.