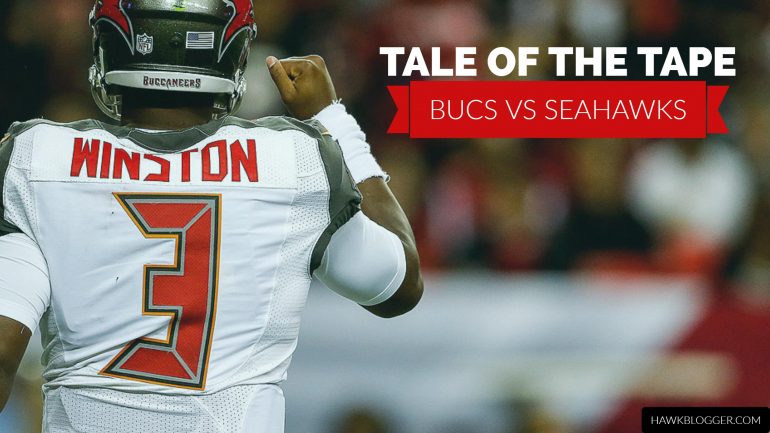 This is where I tell you this is a trap game. The Bucs have weapons like Mike Evans and Jameis Winston on offense, and a bulldog like Gerald McCoy on defense. They just beat the Chiefs in Kansas City. Seattle just finished a brutal stretch against some of the toughest competition the NFL has to offer, and now has to travel across the country to play a team they will have trouble taking seriously. The truth is this is not a trap game. The Seahawks are significantly better than the Bucs and have shown no signs in the Pete Carroll era of ever overlooking an opponent or playing down to their level (unless they are coached by Jeff Fisher). What makes this game challenging is the injury situation for Seattle. That could be enough to close the talent gap between these two teams and make the path to a Seahawks win more treacherous.

The Seahawks offense has reemerged from an early season protective slumber. Russell Wilson appears ready to run again, and he certainly is throwing with confidence. The offensive line is playing their best football of the season. A dormant run game has shown signs of coming back to life, and Tyler Lockett has once again established himself as a lethal deep threat. Tampa Bay has some sterling talent on defense like McCoy and Lavonte David, but the unit has struggled across the board. They are facing some potential personnel issues this week as well. Their best cornerback, Brent Grimes, left the Chiefs game with a thigh injury and his availability is unknown for this week. Their nickel cornerback, Jude Adjei-Barimah, was just suspended by the league for violating the NFL’s performance enhancing substances policy. Needless to say, losing two of your top cornerbacks when facing a multi-faceted Seahawks offense is not an easy task. Glance at the scoreboard, and it is pretty impressive to see the Bucs defense hold the hot Chiefs to just 17 points on their home field. Look below the surface, though, and you will see Alex Smith with a glowing 94.6 QBR (100 is perfect), tight end Travis Kelce with over 100 yards receiving, and a healthy 6.6 yards per play for the Chiefs. So what happened? It is a familiar story for Seahawks fans. The Tampa offense controlled the ball for over 35 minutes in the game, leaving the highly efficient Chiefs offense little time to put up points. In addition, the Chiefs turned the ball over twice. The combination of those two things was enough for the Bucs to squeak out a two point win on the road.

McCoy is a beast, and deserves some attention. He has a bit of help in the pass rush from guys like rookie Noah Spence, free agent end Robert Ayers and former Seahawk Clinton McDonald. That has been enough to create a middling pass rush.

The Bucs have an uncanny ability to get off the field on third down. They are the anti-Seahawks in that regard. Nearly every defensive ranking is bottom third in the league except a #5 spot in third down defense. Seattle has been struggling in converting third downs so far, and if the Bucs can continue to hold serve, it will set up a potential repeat scenario of what they did against the Chiefs and what Seattle has suffered through in previous weeks. Seattle must stay on the field to give their injured defense as much rest as possible.

Explosive plays will be a potential deciding factor in this game. Seattle has five games this year with at least eight explosive plays on offense (16+ yard pass, 12+ yard run). They have won each of those games and averaged 30.4 points. There is reason to expect this will be the sixth such game.

Even with the injuries this year, Seattle ranks fifth in the NFL in explosive pass plays. The Bucs defense ranks dead last in surrendering explosive passes. That will not get any easier should their best corner be sidelined and with their nickel back suspended.

The Bucs are not much better in defending big rushing plays. They rank 27th in the NFL in allowing runs of over 12 yards. This is the most advantageous matchup for the Seahawks offense since facing the 49ers. Some would argue the Saints defense was in this category, but they have been much tougher lately. The latest evidence of that was holding a Panthers team to 23 points on the road after that same team had scored 38 points in New Orleans earlier in the year.

This Tampa defense gives up points, gives up yards, and is almost equally bad at defending the run and pass. They rely heavily on takeaways, and do quite well there ranking fifth in the league. The challenge there is no team in the NFL is better at protecting the rock than the Seahawks who have turned the ball over just once in the last seven games. Believe it or not, the Seahawks is also proving to be one of the better pass protecting teams in football. The combination of their mostly reliable pass blocking, Wilson’s return to health, and their voracious appetite for big plays should lead to more than 30 points for the Seahawks.

This is a game the Seahawks offense should win. The defense needs an assist.

You might think after the preceding analysis that the Seahawks defense is in trouble against the Bucs offense. Not exactly. As you’ll see, the Seahawks hold almost every advantage. The nuance is that most of those numbers were compiled with players who may not be on the field Sunday. Earl Thomas and DeShawn Shead are unlikely to make it for this game. Not only are both incredibly valuable cogs in the Seahawks scheme, but the Bucs are most dangerous through the air.

Tampa has some injury issues of their own with center Ben Gottschalk being placed on IR this week, which will force injured Joe Hawley to step in. They also are missing wide receiver Vincent Jackson who was placed on IR earlier in the year. Tampa Bay has an amazing ability to convert third downs. They don’t necessarily need to be in manageable distances either. They are fifth in the NFL in converting 3rd and 10 or more yards to go. Remarkably, they have had at least one conversion of 10 yards or more in every game this season. Conversely, the Seahawks have struggled uncharacteristically in allowing third down conversions, even those of the lengthy variety. They have allowed a conversion of 10 yards or more in nine of their ten games.

Reduce the distance to five yards or less and the plot thickens. Tampa Bay is actually worse, relatively speaking, at converting those situations into first downs. They rank 18th in the NFL. Part of that has been a heavy reliance on passing. Of their 63 attempts to convert 3rd and 5 or less, a whopping 48 have been passing plays, per Pro-Football-Reference.com.

Seattle figures to have their biggest problems in situational defense should Thomas and Shead be out. Communication is key on third down and near the goal line where things happen quickly. Given the Seahawks pre-existing struggles on third down and the Bucs prowess, that could be the biggest factor in the Bucs favor.

One name to keep an eye on is Cameron Brate. He is a rookie tight end who is drawing rave reviews. Thomas is integral to controlling seam routes in this defense, utilizing his rare speed, instincts, and preparation. Look for Tampa to try to exploit that early and often.

The Bucs will try to milk the clock and suffocate the Seahawks offense. Third down defense is going to be a major factor in determining the outcome.

That is, unless, the Seahawks can turn the Bucs over. Winston is prone to making some foolish decisions. Tampa is 24th in the league in giveaways, and the Seahawks have nabbed two turnovers in each of their last two games against teams who are far less prone to giving the ball away than the Bucs.

Pass rush will be something to watch as the Seahawks continue to be one of the top pass rush teams in the league. Should Michael Bennett return, that only becomes a bigger advantage for Seattle. The left side of the Bucs line is weak. Whoever the team chooses to line up over there will have a big advantage. Tampa may be getting back their starting left guard, Kevin Pamphile, who has been out with a concussion. That is only marginally helpful as he is not a terrific player either.

The Seahawks pass rush must cause havoc in this game to help the secondary. There is good reason to believe they can do exactly that. The winning recipe for the Seahawks defense is 3 or more sacks and at least one turnover.

Seattle goes from facing the best kickoff return team in the NFL to the worst. The Bucs are benign in the return game, but are relatively good in coverage.