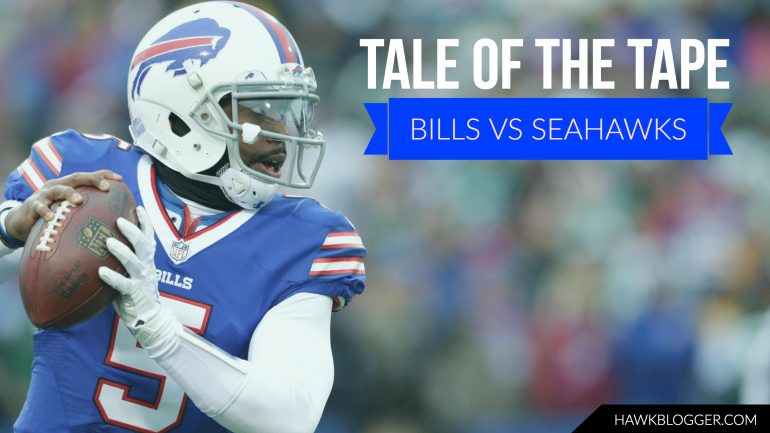 The tale of the tape last week proved to be frustratingly prescient. Seattle needed a strong performance from their offense and did not get it. The defense gave up a season-high 25 points. Buffalo poses a different sort of challenge. They are not elite on either side of the ball, but have unique strengths. Seattle’s biggest advantage will be playing in front of their home crowd. There is little reason to expect this one to be easy.

Getting a handle on the Bills defense is difficult. They gave up 41 points the Patriots last week, but only 357 yards, or an almost identical output to what the Seahawks did on Sunday versus the Saints. They gave up 28 points and 454 yards to the Dolphins the week before, including 256 yards rushing, but held the Patriots to just 72 yards on the ground and 3.1 yards per carry. Their best defensive player, Marcell Dareus, just played his first game of the season and made an immediate impact with a sack and two tackles for loss. They also just played their first game without starting strong safety Aaron Williams.

What we can be certain of is that the Bills defensive line is formidable, and their coach is incredibly aggressive. Buffalo brings the NFL’s best pass rush to town. A disruptive defensive line has essentially been all an opponent has needed to cripple the Seahawks offense. New Orleans did not even have that, and was able to keep Seattle out of the end zone most of the day. A whopping 10 different Bills players have recorded sacks this year. Defense End Lorenzo Alexander leaders the NFL with 9.0 sacks. Jerry Hughes has 4.0 sacks from the other side. Dareus is dominant in the middle. Kyle Williams add 2.5 sacks in the interior and rookie first rounder Shaq Lawson got his first sack in just his second game this past week.

They will come from anywhere and everywhere. A sound strategy would be for Buffalo to rush only four, giving their secondary plenty of help. The Ryan brothers are not known for being patient and sitting back. Blitzing may be effective against the Seahawks, but it would also open up some additional options for Russell Wilson to exploit.

Should the Seahawks get something going on offense, they may have trouble getting into the end zone against the third best red zone defense in the league. This has the feel of a game Seattle would need to win in the teens. Putting up a lot of points against this defense seems unlikely.

Surprisingly, the Bills have had trouble defending the deep pass. Their pass rush is good enough that there should not be enough time to consistently take the seven-step drops required to throw down field. Team, though, with capable outside threats have been able to do some damage. Football Outsiders has the Bills as the 30th-ranked defense when it comes to defending the #1 receiver on opposing teams. Look for Seattle to target Doug Baldwin early and often, and to get Tyler Lockett going deep where possible.

Pete Carroll was open this week about the desire to get Baldwin the ball more often, and to get more chunk plays back in the passing game. He admitted they were hesitant to put too many long throws in the game plan due to Wilson’s new pectoral injury. Having seen him make the throws on Sunday, expect the team to try some down field throws this week.

Lockett also looked healthy for the first time since the first half of the Rams game. He will be a tough cover for Buffalo who has not really seen him involved much on tape due to the injury. Seattle may be able to surprise them a bit.

The other player Carroll mentioned wanting to get more involved was Jimmy Graham. Buffalo has struggled defending the tight end position, ranking 22nd in the NFL, per Football Outsiders. They gave up 109 yards and a touchdown to Rob Gronkowski last week. It is unclear how the Williams injury at safety factors into their tight end coverage game plan. You can bet Seattle will try to isolate Graham on the Bills safeties.

The only player in the Saints secondary of 6 feet tall is CB Stephon Gilmore, who is only 6’1″. Even the linebackers are on the shorter than average. Jimmy Graham will have a big advantage against whoever matches up on him. The Seahawks absolutely must make him a central part of their game plan.

Believe it or not, the Seahawks pass protection has been one of the strengths of the team so far. That is not to say the offensive line’s pass blocking has been great, but the ability of the team to avoid sacks is among the best in football. They are now ranked 7th in the NFL in opponent sack rate. Carroll has finally admitted they changed the offense rather dramatically to protect Wilson from additional damage. As his knee and ankle injuries are appearing to improve, and the team needs to create bigger plays, they may choose to take more chances on longer developing pass plays. The battle between the Seahawks pass offense and the Bills pass rush may be the determining factor in this game.

The Bills offense is a bit easier to figure out than their defense. Their primary focus is on running the ball behind a strong line. They have a dynamic back in LeSean McCoy, who may be back for this game, and a dynamic quarterback in Tyrod Taylor who can scramble at any time. He may be the closest thing to a Wilson clone in the NFL. This offense has put up points on nearly every team they have faced, but is flawed in ways that keep it from being consistent. Teams that lean on the running game tend to have lower yardage totals. The game is shortened, and the chunk plays are fewer. Seattle was like this in the early years with Wilson. The Bills have gone for over 190 yards rushing three times this season, including a season-high 313 rushing yards against the 49ers.

The Cardinals and the Saints were successful in moving the ball downfield against the Seahawks by committing to the run on first and often second down to setup 3rd and short plays where their veteran quarterbacks were able to convert for first downs. It led to long drives, dominance in time of possession, and a worn down defense.

Seattle will again be without Michael Bennett, who is an important part of the run defense. McCoy is a game-breaking player. His replacement, Mike Gillislee, is no slouch. He averaged 5.7 yards per carry last year, and is averaging 6.9 yards per carry this year. He averaged 7.1 yards per run against the Patriots last week.

Look for the Bills to hammer the ball all night, and try to break one or two to put enough points on the board to win.

The Bills struggle to convert third downs (26th in the NFL), largely due to their inefficiency in the passing game. It would be one thing if they were just near the bottom in passing yards. That happens when you run a lot. The issue here is they are ranked 28th or worse in yards per attempt and completion percentage. To make matters worse, they have a huge pile of injuries at wide receiver, including missing their star wideout Sammy Watkins.

They were so desperate at the position that they went out and recruited Percy Harvin out of retirement. There is no way to know if he will be able to play this week, but you can bet both he and the team would love to see him get out there.

Seattle may get back Kam Chancellor this week, but should not count on it. Even without him, the team has a massive advantage in the passing game. Not only do they have the best secondary in football, but they have the 4th best pass rush that will be going up against the 29th ranked pass protection team in terms of sacks per drop back.

This is all the more reason why the Bills will be looking to stick with the run wherever possible. That means Seattle will load up the box. Chancellor would be a very valuable piece to get back for this very reason. Kelcie McCray has played well in Chancellor’s absence, but he is not the force in the run game that Chancellor is.

Seattle was tops in the NFL in opponent 3rd down conversion rate until the past two weeks when Carson Palmer and Drew Brees picked them apart on 3rd and short. Taylor is not Palmer or Brees, and should have trouble sustaining drives. The Seahawks ability to stuff the running game is the best way to win this game.

Buffalo is winless (0-3) this year when rushing for less than 100 yards. The Seahawks run defense still ranks 4th in the NFL in yards per rush. This will be a physical. Seattle likely needs to hold the Bills to less than 16 points if they want to win.

Lockett started looking like himself in the Saints game, and we saw some of that turn into meaningful returns in the kick and punt game. The Bills are not strong in either punt or kick coverage, so perhaps special teams will be the difference in this game.