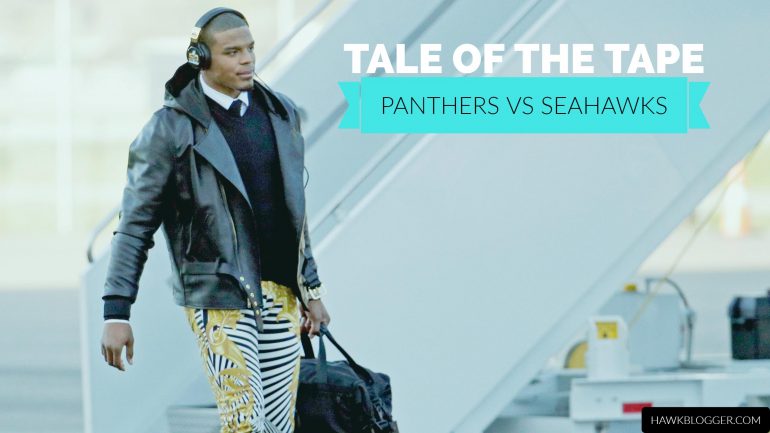 Tale of the Tape — Injured Panthers Still Have Claws

Seattle’s loss to Tampa Bay lingers like a nightmare you cannot quite shake. The way the Seahawks played was in such contrast to the standard they have set that it makes prognostication far less cozy. Carolina rolls into Seattle this week licking their wounds in the midst of a bitterly disappointing 4-7 season. Not only have they suffered devastating injuries, but they had regressed in a few key areas even before the wounded piled up. They have not beaten a team with a winning record this year, and their only win by more than 10 points came against the lowly 49ers. Their losses have been close as well, with five of the seven being by three points or less. This is a team that still features an MVP at quarterback, a bruising running back, and physical front seven. There is an argument to be made that the Panthers are more dangerous than the Bucs. The Seahawks will need to reestablish who they are and how they play this Sunday night to secure a much-needed victory.

The Seahawks offensive line lost the game last week. It is usually unfair to hang a defeat on any one player or group, but this was cut and dry. The offense was unable to function due to the total collapse of the play upfront. What made that most disturbing was the Bucs did not feature a particularly menacing front line. Carolina does.  Kawann Short almost single-handedly wrecked the Seahawks offensive line in the playoffs last year. Star Lotulelei is a handful in the middle. Charles Johnson still brings pressure from the edge. Kony Ealy was arguably the best defender in the Super Bowl last year not named Von Miller. They may be without leading pass rusher Mario Addison (6.5 sacks), which would help. They may also be without All-Pro linebacker Luke Kuechly. Even without those two stars, the Panthers front seven has everything it needs to put this Seahawks offensive line on center stage once again. The good news is Seattle gets a chance at redemption on multiple levels, both for their performance in Carolina last year and their performance last week in Tampa. A good outing against this front line would go a long way toward restoring confidence. The Carolina defense is a bit of an enigma. They rank first in the league in defending the run at just 3.3 yards per carry, and are sixth in the league in sack rate. They are top ten in takeaways and top five in red zone defense. Yet, they rank 24th in points allowed. We will get into how that is possible when discussing the Seahawks advantages in a moment. The important note here is the Panthers defense is damn good at stopping the run and rushing the passer.

They will look to repeat the success that Tampa had last week by attacking the weak Seattle tackles. The Bucs were smart in how they targeted the edges, which is why rookie center Joey Hunt was not really challenged and the return of Justin Britt this week can only help so much. Carolina would be wise to pick a side to attack, leave one of their stout interior tackles in the middle and one of their quality edge rushers working on the other tackle the way Noah Spence did for Tampa. Seattle will need to prove they can handle that or any team with a decent defensive line will torture them the rest of the way.

Any attempt by Seattle to lean on their run game would play right into the Panthers’ hands. Even without Kuechly, they are incredibly tough to run on.

Carolina has given up so many points for two main reasons:

The Panthers have already surrendered three turnover touchdowns this year, and rank 29th in giveaways. That has put their defense in very tough positions throughout the year. Only their excellent play in the red zone has kept their rank in scoring defense from plummeting even further. They also let cornerback Josh Norman go this offseason and then released a player in Bene Benwikere who was expected to be their best corner returning from last season. That has left them with two rookie starters in James Bradbury and Daryl Worley, along with journeymen Robert McClain and Leonard Johnson. Both McClain and Johnson are battling injuries and have been picked on relentlessly. Doug Baldwin should give those guys fits.

Seattle needs to get the ball to Baldwin early and often, and make better use of Tyler Lockett. Lockett is a great deep threat, but he can be so much more. When the Seahawks offense was flying last season, it was the combination of Lockett and Baldwin that made life so difficult for defenses. This would be a great game to bring that back.

There is no doubt that Seattle would benefit from Kuechly missing the game, but don’t breathe easy. Backup A.J. Klein has always been impressive when he plays, and would be a starter on most NFL teams.

Shaq Thompson is one of the be Panthers more athletic defenders at linebacker, but teams like the Raiders were able to scheme him off the field by going to four and five receiver formations. That would mean more time for Paul Richardson and possibly Tanner McEvoy if the Seahawks wanted to follow suit. Forcing more Panthers secondary players on the field and more playmaking linebackers off would be a wise move.

You may see a lot of empty formations from the Seahawks this week where there is nobody in the backfield besides Russell Wilson. That has the dual advantage of forcing an inferior personnel package for the Panthers and allowing Wilson to feature more quick throws to offset the Panthers pass rush. Jimmy Graham had a big game against the Panthers in Seattle last year, and that was with Kuechly playing. Keep an eye out for him to reemerge.

The Panthers have surrendered more than 30 points three times this year. Opponents have averaged 417 yards passing in those contests, including Julio Jones netting 300 yards receiving earlier this year.

Even Case Keenum threw for 296 yards against this secondary. Wilson can have a huge day if he is decisive and his line gives him just a little bit of time.

Forgive the Seahawks if they do not breakout the violins when the Panthers go over their injury situation. Seattle has had more than their share of injury issues this season, but for once, it appears they are getting healthy as an opponent is triaging. The Carolina offensive line situation has been called a “catastrophe” by the Panthers general manager and head coach Ron Rivera. They are not exaggerating. Starting left tackle Michael Oher was placed on injured reserve. Starting center Ryan Kalil (their best lineman) and backup center Geno Gradkowski were placed on injured reserve this week. Right tackle Daryl Williams left the Raiders game last week with a protective boot on his foot and is unlikely to play. They were forced to move their right guard to right tackle, leaving only Andrew Norwell at left guard as a starter playing in his intended spot. That is rough.

Meanwhile, Seattle is due to get back linebacker Mike Morgan and arguably their best defensive player in Michael Bennett. DeShawn Shead should be back and Earl Thomas might be back. My best guess is Thomas will be held out one more week, but that would still be a huge influx of talent. If lineman Damontre Moore can find his way back, all the better. The Seahawks defense is the best in the NFL, and anything less than domination against this depleted Panthers line would be disappointment. This is still a top ten scoring offense. Even with the injuries along the offensive line, they nearly beat the Raiders on the road while scoring 32 points. Newton gives this team one of the toughest red zone offenses in football with his ability to threaten on the ground or through the air. Jonathan Stewart has been returning to health and is coming off his best game of the season. Stewart has historically been one of the toughest runners the Seahawks face.

Seattle got blown off the ball and missed tackles early in Tampa, which led to two early scoring drives. Carolina will need to try and establish a run game as well to take some of the pressure off their line.

The Panthers have still been able to uncork a big play in the passing game, ranking ninth in explosive passes. The Seahawks have struggled with that, which is at odds with their scheme and past performance. Look for Ted Ginn Jr. to get a few deep passes thrown his way as the Panthers attempt to pound the ball on the ground and take a few shots down field.

Kelvin Benjamin is a huge target, and played well in his one game against Richard Sherman and the Seahawks during his rookie year. Greg Olsen is a big threat, although Seattle had good results against him in past seasons before surrendering big plays last year. If Thomas is unable to return, the Panthers will attack the seams with Olsen and their big receivers to try and exploit his absence.

The Seahawks front seven should do to the Panthers offensive line what the Bucs did the Seahawks last week, especially if Bennett returns. One of the lesser-told stories against the Bucs was the Seahawks finishing without a sack. This is one of the best pass rushing teams in football. They need to hit Newton often in this game.

That domination should extend to the run game as well. Seattle is third in the league in slowing opposing rushers yards per carry. Carolina needs to run the ball to win this game. There is no reason the Seahawks should allow that to happen.

The Panthers turned the ball over an astounding 16 times in their first six games. They have calmed down a bit, but turned it over twice more last week. Seattle has had at least two takeaways in three straight games. A couple of turnovers in this game is a reasonable expectation.

Given their advantages in health, talent and home field, the Seahawks should hold the Panthers to 10 points or fewer. This is not the week to give up a few early scores. First down defense will be key.

Just for good measure, the Panthers lost their punter Andy Lee for the season as well. That has meant Michael Palardy has stepped in to punt the past two games and has been just okay. This could be a game where Lockett can make an impact in the return game. Graham Gano has missed three extra points on the year.