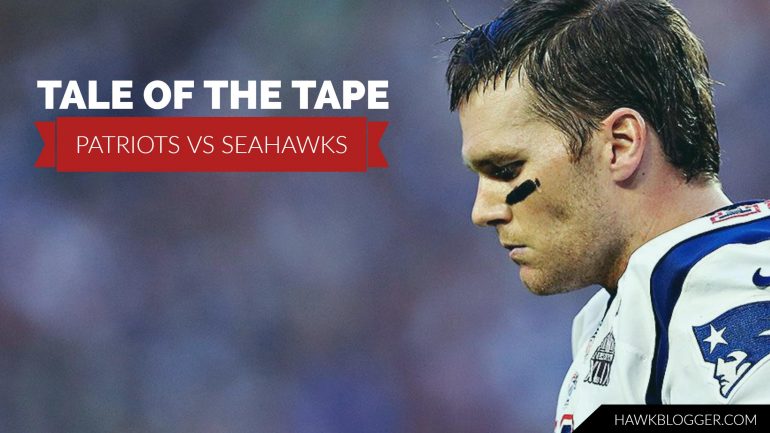 Tale of the Tape — Seahawks Matchup Better Than Expected Against Patriots

There is no arguing that the Patriots are the best team in football right now. They have the best player to ever put on a uniform at quarterback. Their offense is as efficient and balanced as any time in the Bill Belichick era. Playing at home, where they have won 24 of the last 25 games Tom Brady has started, is among the league’s most difficult tasks. Seattle is far from full strength and will be playing on short week while the New England is coming off a bye. This has all the makings of a bad outcome for the Seahawks. Taking a closer look at the relative strengths and weaknesses of both teams paints a different story. There is reason for hope in Seattle.

Seattle emerged from a slump on Monday night when they erupted for 28 points in the first half and nearly 250 yards. They will need to be on point against a stingy Patriots defense that ranks second in the NFL in points allowed. That ranking is among the biggest statistical mysteries in the NFL. New England is not particularly strong on any other measureable part of defense. In fact, Football Outsiders has them ranked 18th in the league on that side of the ball. One might think the small number of points would come from an offense that is holding onto the ball for long stretches, but the Patriots rank 16th in the NFL in that category. One could make a compelling case that the Patriots are fortunate to have surrendered as few points as they have, and are due for a regression to the mean. New England is a very sturdy run defense. Their rankings of 15th in rush defense and 16th in yards per rush are mediocre, but Football Outsiders has them as the 5th best run defense in football. They have stout interior linemen and a playmaking middle inside linebacker in Dont’a Hightower who are physical at the point of attack. Combine the Patriots strength in defending the run with the Seahawks anemic rushing offense, and we may see the master tactician in Belichick employ the inverse of an eight-man box.

Coaches who feel their run defense is threatened often bring down a safety toward the line. This puts more strain on the secondary with one fewer player in coverage. New England would be wise to dare the Seahawks to run by playing extra defensive backs, knowing their line and linebackers should be able to contain the Seahawks running game on their own.

The Patriots strongest ranking outside of points allowed is yards per attempt (10th). That implies they protect the big play, but they are in the bottom half of the league in surrendering plays over 20 yards. Consider it another mystery.

One thing New England is really good at is limiting early scoring. They allow an NFL-best 7.1 first half points per game (the Seahawks are second at 7.2). They are even better at home, allowing 5.8 points per game in the first half. This is a defense that benefits greatly from a front-running offense that puts opposing offenses under intense pressure to keep up.

Facing a defense that hangs its hat on stuffing the run is not exactly intimidating to the Seahawks at this point. They have practically abandoned the run the past few weeks. In many ways, they are starting to resemble previous Patriots teams in terms of run/pass ratio, if not in production. The New England pass defense is suspect. Starting CB Logan Ryan was recently replaced by Eric Rowe due to poor performance. They have faced only one decent passing offense this season, thanks to the injury that forced Ben Roesthlisberger to miss their game. Andy Dalton and the Bengals are 4th in the NFL in passing yards, and he posted a 103.4 passer rating in their game in New England.

The other quarterbacks they faced were:

Russell Wilson represents their most significant test to date. It is also worth noting they have not faced a tight end anywhere near Jimmy Graham’s level. The Bengals Tyler Eifert missed the game they played due to injury. This will be the first game the Patriots will play without linebacker Jamie Collins, who safety Devin McCourty called the team’s “best defensive player.” Rookie Elandon Roberts figures to get more time as he was already splitting reps with Collins before the move was made. How New England tried to defend Graham will be a key to the game.

Further exacerbating the challenge for the Patriots is the 28th-ranked pass rush. They do not have any dominant pass rushers after trading away Chandler Jones. Jabaal Sheard leads the team with 3.5 sacks. Malcolm Butler, a cornerback, is tied for second on the team with 2.0 sacks. Seattle gave up a season high in sacks (4) against the Bills as they opened up their passing attack more, but the Bills boast the best pass rush in the league. Seattle will need to lean on their passing game heavily to have a shot of winning.

One other interesting note is the Patriots have struggled in situational defense. They are 20th in 3rd down defense and 22nd in red zone defense. Seattle is coming off a 4-4 red zone performance, but has struggled on third downs. Their ability to convert third downs is a bellwether for their offense as a whole, and is the best way to give the defense a rest and limit New England scoring opportunities.

The chart below is even more saw-toothed than the one above. These are two great units clashing, but the clear edge goes to a well-rested Patriots team playing at nearly full strength and likely getting back a dynamic weapon in running back Dion Lewis. They are averaging 34 points per game since Brady returned, and have played only one home game in that time. Seattle has scuffled a bit on defense the last two games, either due to wear, quality of competition, or injury. The figure to get a boost from Kam Chancellor’s return, assuming he makes it through the week, but will definitely miss a guy like Michael Bennett in a game like this. The Patriots are one of the NFL’s best teams at converting third downs (4th). They have been lights out since Brady has returned, ranking second over the last four games by converting a whopping 52.7% of their chances. They are not a big play offense. Relying, instead, on short passing and runs that string together to create drives that most often end in touchdowns thanks to their 6th ranked red zone offense. In fact, they lead the NFL in percentage of drives ending in touchdowns (40.5%) since Brady came back.

If you hold this team to a field goal, pat yourself on the back. They are that good. Seattle had been best in the NFL in stopping third downs the first five weeks of the season. They have really struggled the last three weeks, and have tumbled to 26th in the NFL in that category. New England has their best rushing attack in a while, and can mix run or throw on early downs to set up 3rd and short opportunities where Brady is almost impossible to stop. It is not that much easier to stop him on 3rd and 6+ where he still converts over 40% of his chances.

New England should enter this game with every confidence that they can walk the ball down the field through low-risk, ball control throws and runs up the gut. Lewis would give them yet another weapon to play with on passes out of the backfield. They almost never turn the ball over, and the Seahawks rarely take the ball away this year. The Patriots have yet to throw an interception all year.

Seattle has faced more prolific offenses this season in Atlanta and New Orleans, but each prefer to push the ball down field which the Seahawks defense is designed to stop. Short passing attacks like New England’s are far more challenging, and will require some clever scheming by defensive coordinator Kris Richard if they hope to limit them, or even get off the field to give their offense a shot.

All hope is not lost when you have what is still the best defense in football on your side. Seattle has surrendered 25 points twice this season. The most they have given up to Brady is 26 points in the Super Bowl. They have also intercepted him at least once in every game they have faced him during the Pete Carroll era. The last time they faced the Patriots, Chancellor was placing on a torn MCL that had occurred two days prior. Earl Thomas was playing with a shoulder injury that would require surgery that offseason. Richard Sherman was playing with torn shoulder ligaments. Jeremy Lane left the game with a grisly injury after intercepting Brady. Cliff Avril left the game in the fourth quarter due to a concussion.

None of that is to say fans should expect the Seahawks. These are merely facts that add some context. Bennett was a big part of the pass rush in that game. Belichick famously said on the sidelines that “#72 is the only one causing us problems.” He will not be there this time, but the Seahawks bring in the second-best pass rush in the NFL, and are facing a Patriots team that ranks just 21st in sack rate. They have been far better (7th) over the past three weeks after Brady returned, but an effective pass rush has long been the best way to throw Brady off his game.

An intriguing subplot will be the second game for Damontre Moore. He was surprisingly disruptive in his first showing against the Bills. The combination of Moore, Frank Clark and Avril need to cause problems for the Patriots if the Seahawks hope to slow down the Patriots offense.

The Patriots have been middling in their coverage and Tyler Lockett is back to making an impact in the return game. A great play on special teams would certainly help the Seahawks chances. There are not similar threats on the Patriots side.