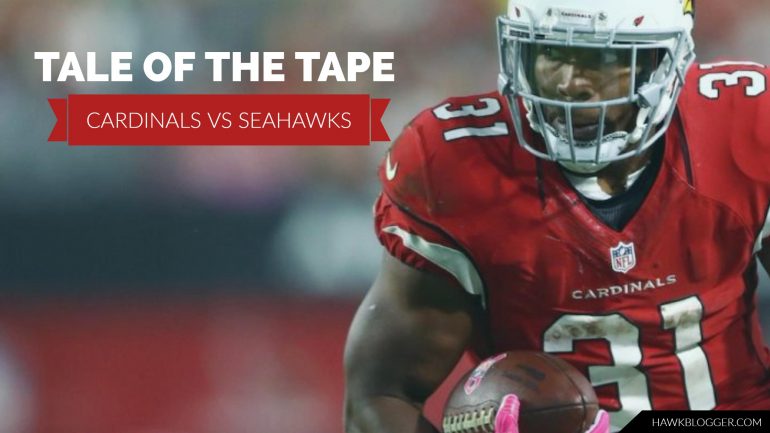 The last time these two teams faced off, we witnessed one of the most aggravating offensive performances of the NFL season. Both the Seahawks and the Cardinals offense failed to score a touchdown despite playing a full five quarters. Both missed field goals under 30 yards that would have won the game. Seattle blocked two Cardinals kicks (a punt and a field goal). Arizona held the Seahawks to 3-14 on third downs, and held the ball for a whopping 46 minutes. It was the longest time in NFL history that a defense had been on the field. That game broke Arizona’s season. A winwould have pulled them into a tie with Seattle. They put everything they had into that game, and came away with nothing to show for it. They now have nothing to play for, but would love nothing more than to spoil Seattle’s Saturday.

This Cardinals team had the top-ranked defense in the NFL before surrendering 48 points and 488 yards to Drew Brees and the Saints in Arizona last week. They are missing some key contributors who played large roles in the first game between these teams. Deone Bucannon led the team in tackles and Marcus Cooper was second. Bucannon went on injured reserve before the Saints game, and Cooper suffered a serious back bruise that almost kept him out of the Saints game. Cooper reinjured his back in that game and did not practice Wednesday, bringing into question whether he will play this week.
For Seattle, Tyler Lockett and Russell Wilson were in the midst of serious knee injuries. Thomas Rawls was out with his leg injury. Bradley Sowell left the game with a knee injury, and George Fant got his first snaps in the NFL.
Sio Moore, a journeyman who has played for three teams this year, started at linebacker, and struggled mightily. Rookie Brandon Williams stepped in at cornerback, and also made his share of mistakes. If Cooper is unable to play, expect more time for Justin Bethel, who Bruce Arians called a “failure in progress” a few weeks ago. Ouch. 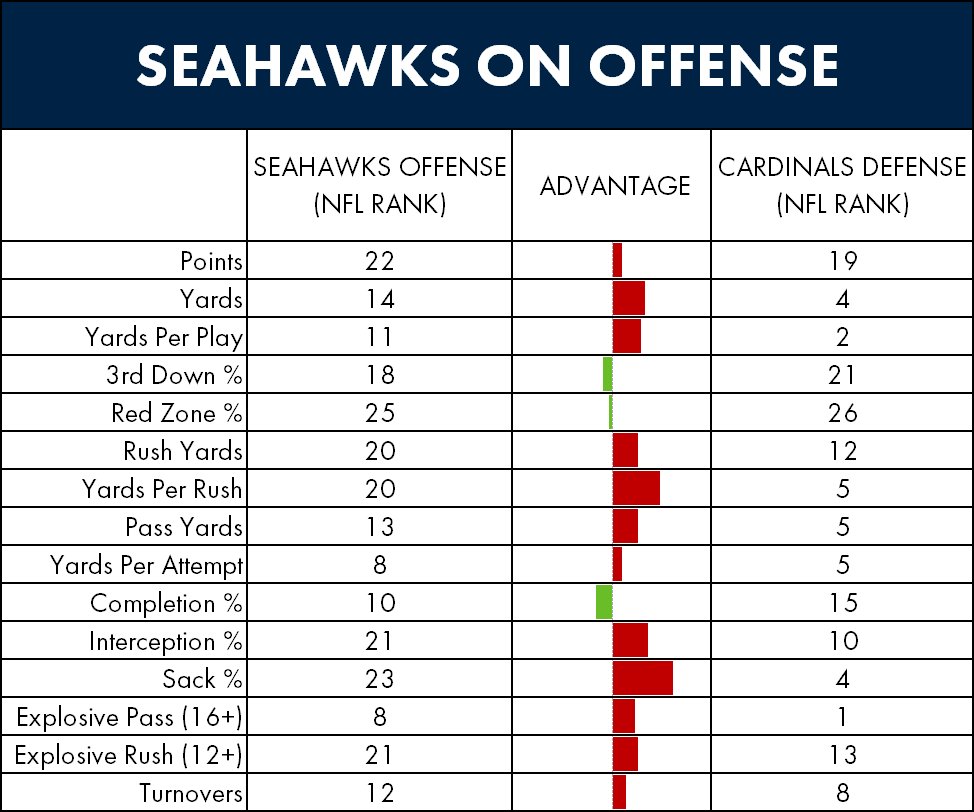 It all starts with their edge rushers. Chandler Jones and Marcus Golden gave the Seahawks’ tackles fits in the first game. They basically stopped the offense by themselves. Calais Campbell adds dominant interior disruption and pressure. Remarkably, Campbell only had two tackles and one tackle for loss in the first matchup. This is also one of the best run defenses in the league. The Saints managed to put up 130 yards on the ground last week.

The big issue for Seattle is that Russell Wilson has been throwing the ball to the wrong team far too often lately. He has thrown an interception in four straight games, and nine (!!) overall in that stretch. For context, Wilson has thrown more than nine interceptions in a season just once before this year.

Arizona is incredibly opportunistic with turnovers. The Seahawks offense gave them nothing in the first game, which was arguably their greatest accomplishment. Wilson and the Seahawks need to repeat that aspect of their performance this week to overcome this ferocious Cardinals defense.

One other note is that the Cardinals are tied for first in the NFL in defending explosive passes. Seattle loves the deep ball. That will be a hidden battle to watch.

The Cardinals are a super weird team. They have all the statistical markings of a great team, but they are not even good. One of the abnormalities is the fact that they are a top ten defense in yards per rush, yards per attempt, and sack rate, but they are 21st in third down defense and 26th in red zone defense. That makes no sense.

It is hard to make a case for any true advantages that the Seahawks have on offense except for the changes to personnel. A healthy Wilson has tormented the Cardinals, and a healthy Lockett has been a game-changer of late. Knowing that the Cardinals secondary is banged up, this could be what the Seahawks need to get untracked.

Garry Gilliam is slated to get another shot as the starter at right tackle. He struggled mightily against Golden in the first game. Fant has had trouble with fast edge rushers and Jones can be dominant. They do not need to be great for Seattle to win. They do need to improve from atrocious to passable this time around.

Rawls could be a big boost as well. The team will look to get him the ball again, and this will be his first career start against the Cardinals. I like his chances of having a decent game despite the odds. Watch out for Marcel Reese as well. The injury to Bucannon will make it harder for the Cardinals to be sound in their coverage out of the backfield.

There are a few differences between these two units as well. Kam Chancellor was missing in the first game, and Earl Thomas was healthy. Michael Bennett played the game with a bum knee that would require surgery after the game was over. Mike Morgan was also out. The list is quite a bit bigger for the Cardinals, and not in a good way.

Left tackle Jared Veldheer is out. Right tackle D.J. Humphries switched to left tackle after Veldheer was injured, but missed the last game with a concussion, and did not practice yesterday. That meant John Wetzel, who never started before this season and went from the bench to left tackle to the bench to right guard to the bench, is slated to be the starter at left tackle again. Earl Watford, who was a bench player, became a starter at right guard, and then slid out to right tackle after Ulrick John was lost for the season a couple weeks ago. That meant that Taylor Boggs slid in at right guard. It is a mess. Before you feel too bad for them, that group was good enough to clear the way for 41 points and just one sack last week against the Saints.

Also gone for the Cardinals are receivers Jaron Brown and Michael Floyd. They do have John Brown, who was limited in the first matchup to just one snap. Finally, tight end Ifeanyi Momah is out as well. You might wonder why that matters. He burned the Seahawks for two catches and 50 yards in that first game. 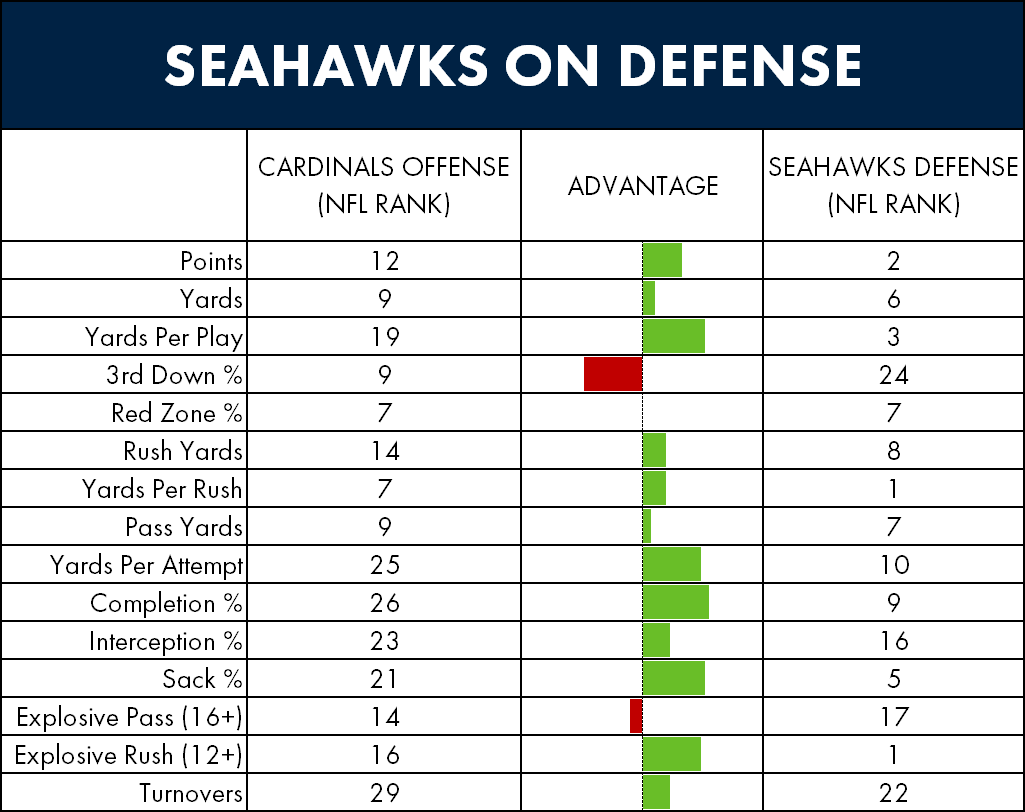 Arizona put together a smart gameplan against the Seahawks defense in the first game. It involved slamming David Johnson into the line repeatedly on early downs to set up short third down opportunities. Carson Palmer and Johnson were good enough to convert 10-21 third downs. That kept the ball in their hands for agonizingly long stretches.

Johnson is arguably the best offensive player in the league this year. He has set a record for the number of games in a row he has recorded at least 100 yards from scrimmage (receiving and running). Look for the Cardinals to give him the ball early and often. They would be silly not to.

The Seahawks have also sprung a leak in defending the explosive pass. They are now 17th in the league in that category, and the Cardinals have been decent there. Getting rid of Floyd and replacing him with more snaps for Brown and J.J. Nelson makes Arizona an even bigger threat to go deep. Arians will try to fool Steven Terrell into more mistakes. Brown and Nelson have electric speed that makes it impossible to recover from false steps at safety.

Seattle finally returned to their disruptive selves on the defensive line last week. They need to do the same here. Cliff Avril, fresh off his first Pro Bowl selection, had 2.5 sacks against Humphries at right tackle in the first game. He will be facing Watford here, who is a guard. Avril needs to dominate. Frank Clark, who had 1.5 sacks in the first game against Veldheer, will likely be going against Wetzel. He should dominate. Bennett, who hopefully will recover from his neck injury in time to play, should be able to embarrass Boggs at right guard.

Palmer should face unending pressure from the Seahawks. Kris Richard can decide whether to get pressure with four players or aggressively blitz. Either should work.

The best kept secret in the league might be the Seahawks #1 ranking in rush defense (yards per carry). Johnson put up 130 yards on the ground in the first game, but it took him a ton of carries to get there. He averaged just over three yards per run in that game. They must be stout here to prevent Johnson from making Palmer’s life easy.

The Cardinals have one of the worst special teams units in the league. Not only do they struggle in coverage, but they are poor in returns, and in punting and kicking. Special teams played a major role in the first game. It could very well be a major factor in this one as well. This is where the Seahawks own the biggest advantage.