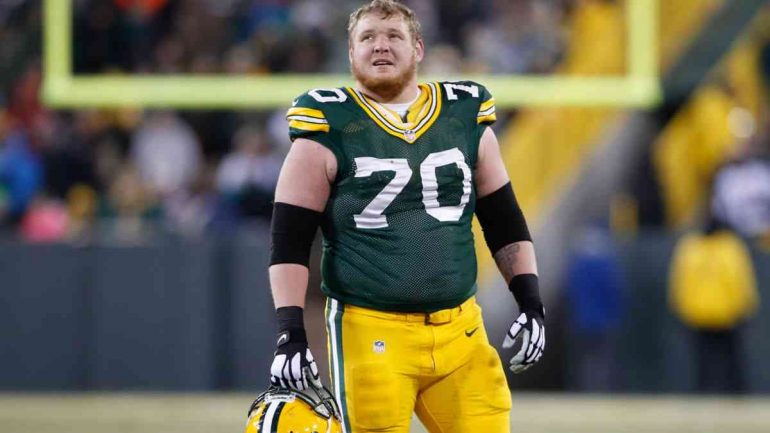 The Joeckel Is On Us

Seahawks fans got some bad news this weekend when Pro Bowl guard T.J. Lang spurned Seattle’s offer to return to his hometown Detroit Lions squad. The queasiness grew after learning the draft bust Luke Joeckel’s one year contract with the Seahawks was guaranteed to pay him at least $7.25M. That staggering sum brought with it a double dose of discomfort as it indicates both that the Seahawks see Joeckel as a starting tackle (where he failed miserably in Jacksonville), and that he will receive a salary usually reserved for quality starters in this league. The other players on the Seahawks roster with a salary cap number over $7M this year are: Russell Wilson, Richard Sherman, Michael Bennett, Earl Thomas, Jimmy Graham, Doug Baldwin, Kam Chancellor and Bobby Wagner. Players like K.J. Wright and Cliff Avril will be below Joeckel in the salary ranks. If that seems wrong to you, that is because it is. Terribly wrong. Seattle found itself in this situation after years of mishandled offensive line decisions. The most egregious errors were not made this offseason, but last.

If you wince when watching violence and gore, you may want to avert your eyes for the next few paragraphs. As mentioned earlier, Lang left Seattle to sign with Detroit. His contract has been reported to be a 3-year deal with an average of $9.5M per year and roughly $20M guaranteed. That is a hefty sum for a guard, but Lang is Pro Bowl player. The Lions ended up just matching a Seahawks offer, allowing another team to do the negotiating for them.

Paul Allen famously asked Chad Brown for a number that the free agent linebacker would sign for on the spot, without needing to weigh his options. It would have taken that kind of tactic to bring Lang to Seattle. The team rightly does not like being held over a barrel and prefers players who want to be here. The issue is less that they allowed Lang to leave the building, and more that they had so many eggs in that basket to begin with.

Lang’s $9.5M average salary and $20M guaranteed sounds like a lot. Consider some of the players the Seahawks could have signed last year for that amount or less

Schwartz was the top right tackle on the market last year. He was a terrific add for the Chiefs, who is still just 27-years-old. He was #15 on my Seahawks free agent big board last year.

Allen had been a quality starter for the Chiefs for years. He is not quite as good as Lang, but is not that far behind either. He was #29 on my big board.

A lot of Seahawks fans wanted Boone last year. He signed with the Vikings, and was #28 on my big board.

Sitton was a late salary cap cut from the Packers, and the Bears scooped him up. This came later, and would have been harder for the Seahawks to make space for. Sitton made the Pro Bowl last year.

Penn was #20 on my big board. He is exactly the veteran tackle the Seahawks needed, and still need. He is a near Pro Bowl player who is durable and excels in both run and pass blocking. Look at those contract numbers.

There were also these two All-Pro level players who would have cost just a skosh more than what Seattle was offering Lang.

Pete Carroll admitted the team was interested in Mack, but he wound up costing more than they were willing to spend. Mack keyed the Falcons rise to a Super Bowl team, anchoring the core of their line. Signing him would have allowed Justin Britt to occupy one of the guard spots. Mack was not high on my big board (#38) because of his age and his price tag.

Osemele was #1 on my big board. You knew he was going to command top dollar, but he was a rare youthful player with All-Pro potential who could play both guard and tackle at a high level. If you wanted to truly change the trajectory of your line, this was a player who could do it. He became a first-team All-Pro last year for Oakland. Had he played for the Seahawks, he could have played guard or tackle. Skies would be bluer. Clouds would be whiter. Water would be wetter.

Not listening to themselves

John Schneider, Carroll, and Tom Cable have been telling everyone who would listen the past few years that offensive linemen coming out of college are terrible. The cupboard is bare. They also have been telling everyone that the run game is crucial to their core football philosophy. They are right on both accounts, but seem to have been a year late and a few dollars short of turning those realities into proper action.

If the quality of line talent coming out of college is dropping, what is the logical impact of that? Veteran linemen who have proven they can play at this level will see their worth drastically increase. Last year was the time to get ahead of that curve.

There was a terrific selection of veteran linemen of all shapes, sizes, and positions available via free agency, and maybe even trade in the case of a guy like Sitton. The Seahawks walked away with Bradley Sowell and J’Marcus Webb. Yikes.

Those decisions cannot be undone any more than Lang’s decision to sign with Detroit. Seattle is now left with largely the same underwhelming line they exited the season with. More critical than signing another free agent at that position is avoiding any more desperate signings of guys like Joeckel.

The worst free agent decisions are almost always made when a team misses on their primary target and moves to their secondary and tertiary options. They want to add someone, anyone, and they overpay a mediocre or worse player. Do not throw bad money after bad money.

They also need to be careful not to oversteer their draft board to overcompensate for the free agent failings. Getting another mediocre or worse lineman with a first round pick would be a huge gut punch when the team really needs to grab from the list of great corners there.

The hope is the Seahawks start bargain shopping. Grab a guy like Breno Giacomini at a small salary. Look at other stopgap veteran options who could come in here and compete for a job. See if there are any options available via trade. Be wise.

There is always an upshot when your team loses out on an expensive free agent. The money can be spent elsewhere, and in other ways. Should we, however, look back on another lost Seahawks season with problems along the offensive line as the primary culprit, it will be due to a failed 2016 free agent strategy more than any decision made this year.