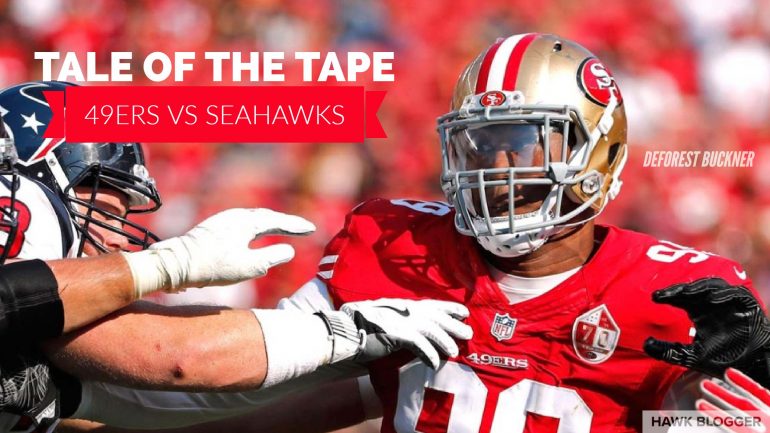 The San Francisco 49ers are half of a team. Their offense has a few talented players, but it is their defense that glitters with first-round talent. Three players on their defensive line, and six players overall on the defense, were selected in the first round. The score of their home opener against the Panthers was a woeful 23-3 in favor of the visitors. Look more deeply into the script of that game and you will find a stout defense that was unable to shoulder the burden of an inept offense. That might sound familiar to Seahawks fans. Seattle is the overwhelming favorite in this game (-13) for good reason, but there are matchups that could cause this to be far more uncomfortable than any Seahawks fan wants to imagine.

The 49ers defense starts with their ultra-talented defensive line. Arik Armstead, DeForest Buckner, Tank Carradine, and Solomon Thomas are all talented young players. Veteran Elvis Dumervil was once an elite pass rusher, and still has enough in the tank to give the troubled Seahawks offensive line a problem. It would not be hard to argue that this defensive line boasts more talent than the one the Seahawks were dominated by in week one.  This one matchup could unravel the whole game for Seattle if the offensive line does not take a significant step forward this week. 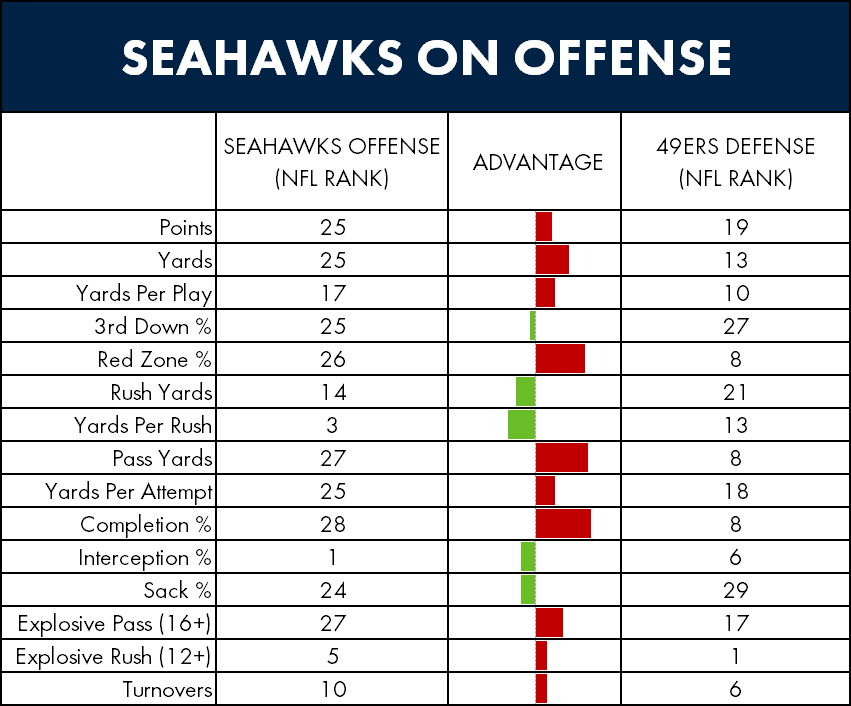 It is hard to imagine all five Seahawks offensive linemen playing better this week. That is what it will take to create any sort of rhythm. San Francisco has enough talent across their line that any one weak link on the Seahawks could lead to Wilson running for his life again. The hopeful news is despite the talent, the 49ers did not record a sack last week, and had just two quarterback hits. It is not only about pass pressure.

The 49ers were very tough to run on a year after being a historically bad run defense. NaVarro Bowman still patrols the middle of the field, and Eric Reid does a nice job in run support. San Francisco will be missing Reuben Foster, who looks well on his way to being a game-changing talent at linebacker, but that front seven still has enough leftover to make life difficult for the Seahawks.

Seahawks receivers are better than the players they will be facing on Sunday. Tyler Lockett sounds like he will be cleared for a larger role in the offense than he had in week one, which could give Wilson another separation receiver available for shorter, quicker, throws. Wilson, historically, has been a stronger deep passer along the left side of the field. That area was vulnerable in the 49ers first game.

Look for the Seahawks to utilize more quick screens to their receivers, even though those did not work well against the Packers. Playing at home will give Wilson a better chance to communicate at the line, and that will hopefully help reduce miscues from the guys in front of him. It is hard to feel confident describing any Seahawks advantage on offense until the line shows it can block for more than one second.

Here is where this game should open up for Seattle. The 49ers are lacking talent on offense, especially at the quarterback and receiver spots. Brian Hoyer is not going to scare anyone other than the fans of whichever team he is playing for. He was responsible for an interception and a fumble that turned the Carolina game into a blowout. That was at home. Welcome to CenturyLink Field. 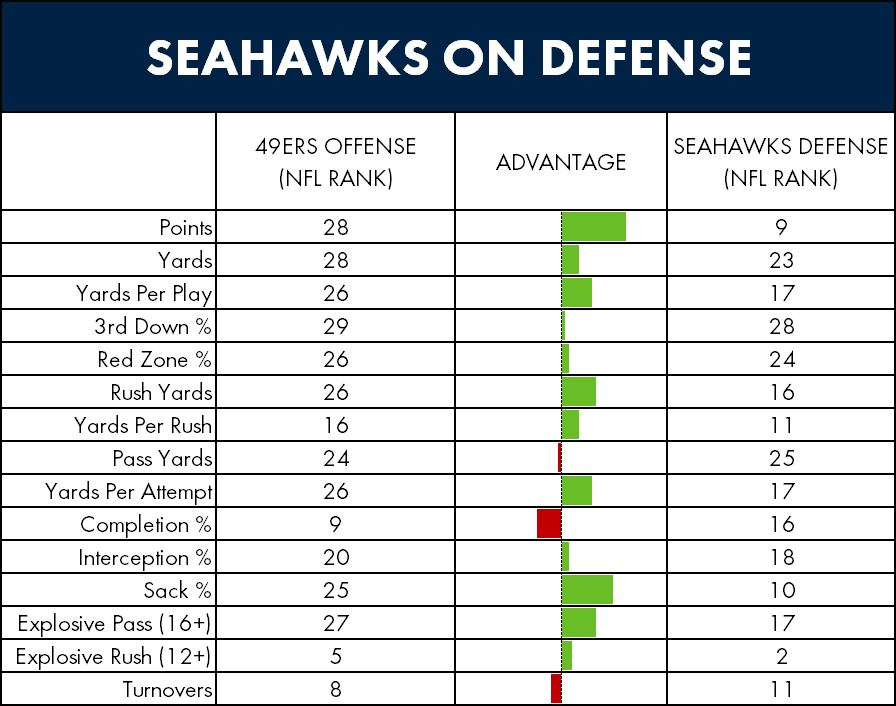 Oh boy. Well, Carlos Hyde is a good runner, and the 49ers have some decent players on their offensive line. Joe Staley is not what he once was, but is tough and smart. Trent Brown, the team’s right tackle, is a mountain of a man, and is a good pass blocker. Kyle Juszczyk is arguably the best blocking fullback in the game. This team wants to feed the ball to Hyde on the ground and through the air. He is their most dangerous weapon by far.

Pierre Garcon is a tough and reliable receiver, sort of an Anquan Boldin-lite. Marquise Goodwin is a decent depth receiver, but is their other starter. There just is not a lot there to work with.

They are plentiful. Start with looking at the spray chart for where Hoyer’s passes went against the Panthers:

A remarkable 91% of Hoyer’s throws in week one traveled less than 15 yards in the air. Even with the protection challenges Wilson faced in Green Bay, over a quarter of his throws (26%) traveled more than 15 yards. Seattle is built to take away the deep ball. When they do not need to worry about deep passes, they can be ultra-aggressive in rallying forward to snuff out short passes and deliver big hits that are more likely to result in turnovers.

The 49ers also have a real weakness on their offensive line. Zane Beadles is their left guard, and he was eaten alive in the first game. ProFootballFocus gave him a -9.0 grade, including -7.4 on pass protection after he surrendered 5 quarterback hurries and a sack. Look for the Seahawks to put Sheldon Richardson over Beadles and torment him all afternoon.

The 49ers should not find the endzone in this game. Seattle’s defense playing in front of their home crowd needs to create turnovers to reduce the burden on their offense. This is a game where two or three turnovers should be possible. Anything more than 9 points for the 49ers would be a major disappointment.

Blair Walsh and Jon Ryan got off to great starts, and the coverage teams were great as well. Seattle has allowed a total of zero return yards so far. Walsh has kicked every ball out of the end zone, and every punt return has either been fair caught or gained no yards. Lockett broke loose for one long return.