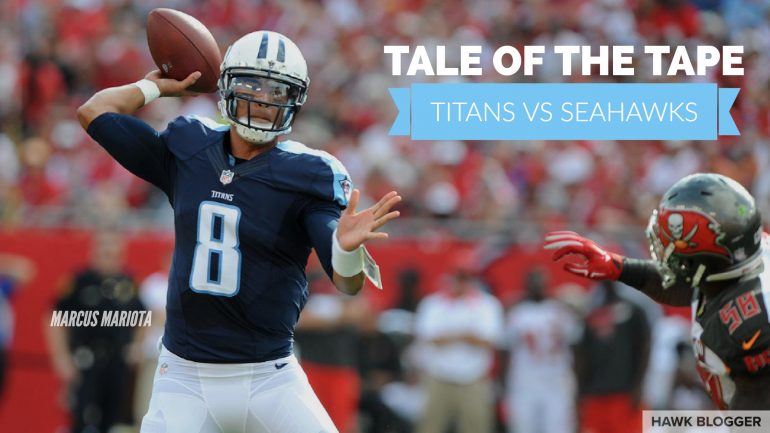 Tale of the Tape — Titans Have Edge Over Seahawks

Seattle enters a pivotal early season matchup against the Tennessee Titans with major questions on offense. They have inarguably been one of the worst offenses in the NFL through two weeks, and will need to take a significant step forward against an efficient Titans offense that will be difficult to hold down playing in front of their home crowd.

The numbers are ugly almost across the board for the Seahawks. Only four teams have scored fewer points so far. Only six teams have fewer yards. This nastiness has caused Pete Carroll to consider some lineup changes. He mentioned it this week on Monday, and the assumption is he means Oday Aboushi will get his first start in place of Mark Glowinski. At least some of the challenges for the offensive line have been communication problems and mental mistakes. Glowinksi was caught going the wrong direction on one play and blocked his own teammate. Not helpful.

Aboushi has started a number of games in his career, and the hope would be that his experience will help reduce those errors. Glowinski is one of the strongest members of that line, so the team may surrender some push in the run game as part of this exchange.

Jimmy Graham may also miss time due to injury. If that happens, look for the Seahawks to be even more committed to the run game than usual. The Seahawks believe they have found something in pounding the rock with Chris Carson. They have been tentative about relying too much on the run game the last year or so, but that might be changing.

Tennessee is suspect on defense. They are neither elite or awful. Their defensive weapons are largely dull blades, but the Seahawks offense has made a habit of making the harmless look deadly of late.

Jurrell Casey has been a home-wrecking defensive tackle for years. He has not been playing as well to start this season, but he is exactly the type of player who gives the Seahawks line fits. Look for the Titans to match him up with Luke Joeckel wherever possible. The two did not match up last year when Joeckel played guard for the Jaguars, but Casey should be able to give him fits.

The Titans have done a good job defending the edges in the run game on wide plays. Seattle will need to attack them head-on.

Tennessee has a subpar secondary. They have struggled particularly on first downs. They have surrendered an average of 6.6 yards per play on first down, 29th in the NFL. Pass plays have been the primary culprit. Take a look at the passer rating of their opponents by pass distance and by down.

If you want to get the Titans, the place to do it is on first down. Seattle will probably come out a little conservative both because they will want to make life a little easier on their offensive line and because they believe Carson is their best offensive option at the moment. Even if they do not succeed with early runs, it could open up some nice play-action opportunities later in the game.

Carson is averaging an astounding 5.1 yards per carry in spite of the line play in front of him. He is among the league leaders in broken tackles. The Titans are a middling run defense. All signs pointing to the Seahawks doing the Armadillo attack with heavier reliance on the run to protect themselves and their quarterback, with some strategically timed shots down field.

Tennessee has a nice young offense. Their quarterback is smart and athletic. Both of their primary running backs are talented and tough. The offensive line has two good tackles, and good guard play. Delanie Walker is a tough tight end who is a great blocker and receiver. Their one minus is at receiver, where they lack game-breaking talent.

The Seahawks defense fears no one. They started down Aaron Rodger in Green Bay two weeks ago and might have kept them out of the end zone if not for the offense giving it away. The Titans bring a different type of attack into this game, and will test a Seahawks run defense that had a few breakdowns last week. It should be a fascinating matchup. 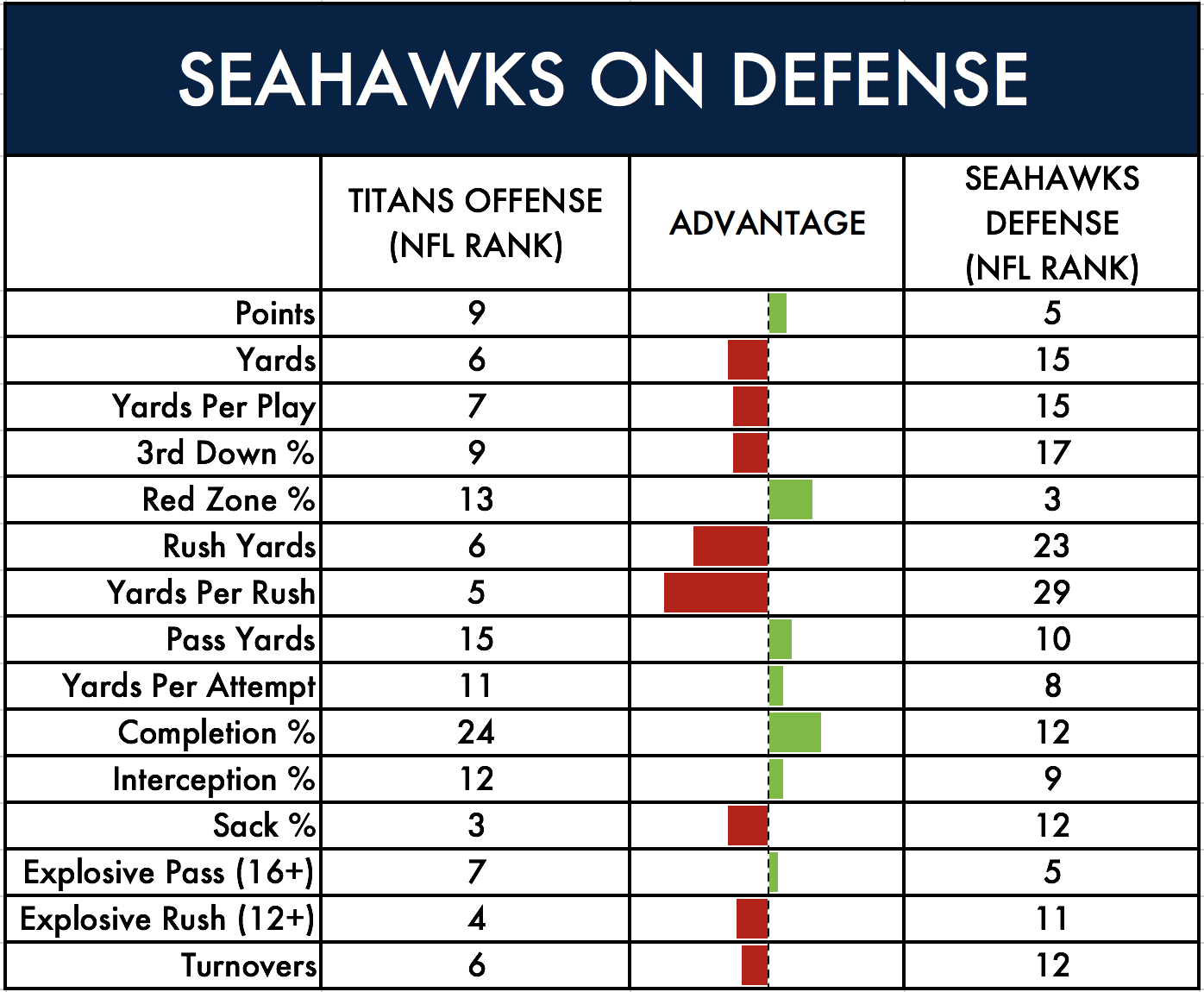 There is not a lot the Titans offense does not do well. It all starts with their rushing attack, which features DeMarco Murray, Derrick Henry, and fleet-footed Marcus Mariota. Murray may not play due to injury, but that will not have much of an impact. Mariota looks like a star in the making.

Jameis Winston tends to get more attention down in Tampa Bay, but Mariota has shown far better judgment, both on and off the field. He manages to create big plays without putting the ball in harm’s way. He threw 26 touchdowns last season with only 9 interceptions. He has yet to throw a pick in the red zone.

The Seahawks likely need at least one turnover in this game to help their scuffling offense score the necessary points to win. That will be tough against a Titans team that does not give the ball away very often.

Seattle had some uncharacteristic mistakes in the run game against San Francisco. I would not expect that to happen again, but their tackling and gap discipline will be tested against this group.

Tennessee has not faced a secondary like Seattle’s so far this season. Few, if any, teams in the league have a defense as solid at all levels as the Seahawks. Should the Seahawks be able to slow the Titans run game on early downs, they have a chance to make life difficult for Mariota on longer 3rd downs.

Seattle also has an advantage in the red zone. Keeping the Titans to field goals will be big in this game.

Neiko Thorpe is likely out for this game with an ankle injury, and the Titans punt return game has been explosive so far. That could be an underrated factor in the outcome of this game.