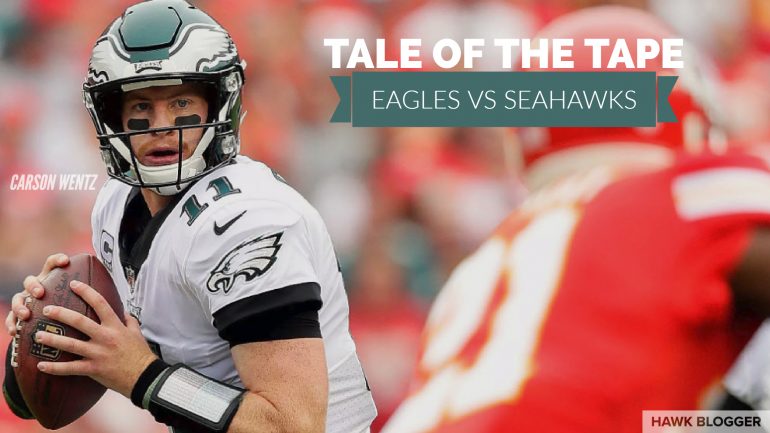 Both the Seattle Seahawks and the Philadelphia Eagles enter a primetime game on Sunday night in unfamiliar positions. Seattle has won four straight road games, but has lost two straight home games. They have never lost three straight at home under Pete Carroll, and it has only happened twice in the 16 years CenturyLink Field has been open, with 2008 being the last occurrence. The Seahawks have lost two straight home games three times under Carroll, and have won the next home game each time by an average of thirteen points. Seattle is also a 5.5 or 6 point underdog. The last two times the Seahawks were underdogs by that large of a margin in a regular season game was at New England last season (+7.5) and at Arizona during the 2015 season (+6.5). The Seahawks won both games. The last time they were a home underdog by this large of a margin was in 2011 versus Baltimore. They won that game as well. The largest spread against the Seahawks at home during the Carroll era was in 2010 versus the Saints in the playoffs. Seattle won that game, too.

Philadelphia is on unfamiliar ground as well. They have not played a winning team in five weeks. This will be just their second game against a team with a winning record, as they have faced the easiest schedule in the NFL by winning percentage thus far. They are 1-1 in those games. They have the best record in the NFL. The last time they accomplished that feat for a full season was 1980. Their quarterback, Carson Wentz, is a favorite to win the MVP. The franchise has had only one MVP in 85 seasons, and that was Norm Van Brocklin in 1960.

The Eagles have one of the best offenses in the NFL and one of the best defenses. They run the ball better than anyone, and are lethal through the air. Their defense is fast and aggressive at every level, and can absolutely dominate opponents rushing attacks or make big plays in the passing game. They are legitimately the best team in the NFL through eleven games, and are almost certain to earn the top seed in the NFC.

They are also going to lose this game. Wounded and inconsistent, the Seahawks limp into this game without many of their best players and with plenty of doubts about their offense. Go off and look for quantifiable evidence that Seattle is the better team of these two, and you will come up empty. Philadelphia should be favored, and they should win. They won’t. The reasons why cannot be measured. Perhaps, their best evidence come from the numbers shared earlier about what happens when the Seahawks are counted out. They don’t just cover the point spread in those moments. They win. Seattle has their own MVP candidate in Russell Wilson, and his best comes when hope has dwindled. This Seahawks team will enter a primetime home game free of expectations. Free of that weight, they will rise. The Eagles defensive line is monstrous. Led by Fletcher Cox inside and Brandon Graham outside, they can create pass pressure, but it is their strength against the run that really stands out. Just two teams have managed to run for over 100 yards against the Eagles this season, and none for more than 112 yards. They have a massive advantage their against a Seahawks line that has yet to demonstrate they can create any consistent push in the run game.

An effective run game, however, has not been a reliable indicator of Seattle success this season. They are 3-2 when rushing for over 100 yards, having lost their last two such games, and 4-2 when rushing for less than 100 yards. Their season low for rushing yards was 33 against Houston, and the Seahawks scored 41 points that game. Few teams will be better aquatinted with an ineffective rushing attack than the Seahawks.

Philadelphia also excels at limiting explosive passes. Wilson loves the deep ball and throws one of the best in football, but will have to make wise decisions about when to test this play-making secondary that loves to take the football away. The Eagles have at least two interceptions in four straight games, and at least one interception in six straight games. Wilson has thrown two of his worst interceptions the last two games early in the contests. Those kinds of mistakes must be eliminated.

There are not many. Seattle’s biggest advantage may be the unknowns they can throw the Eagles way. Luke Joeckel and Duane Brown have played exactly one game together on the offensive line. Seattle gave up no sacks in that game for the first time in two years, and had the third-best pass protection of any line in the NFL last week according to ProFootballFocus. The Eagles have not faced a line that can protect the passer as well as Seattle’s since playing in Kansas City in week two. That line helped clear the path to a season-high 27 points against the Eagles defense.

Mike Davis is also expected to play, and gave the offense a significant boost against the Falcons before leaving with an injury. There is little tape on how Seattle plans to use him. What tape does exist shows the Seahawks utilizing him very differently than their other primary runners like Eddie Lacy and Thomas Rawls. Davis was great on screen passes out of the backfield.

Wilson is at his best when he is properly judging risk and reward in his passes. He has helped Seattle to be one of the best in league at protecting the football over the past few seasons. Only one team has gone a whole game without turning the ball over against the Eagles this season. That was the Chiefs, the Eagles only loss. Wilson is more than capable of making this the second on both counts. Wentz has been terrific through the air this season, especially near the opponents end zone. He has thrown 20 touchdowns without an interception in the red zone this season for a passer rating of 118.1. That is his best of any part of the field. Backed up inside his own 20? Wentz is a rather dismal 52.2 rating. He is also exceptional on third down. His passer rating of 123.4 on that down is his best of any down. He is especially adept on 3rd and 10+ yards, where he has a remarkable rating of 119.0. As good as he is on 3rd and long, he’s even better on 3rd and less than seven yards. He has a rating of 140.5 in those situations.

This is the profile a player who plays his best in the biggest moments. He adds scrambling ability to make things even more challenging for defenses. Not to mention, Wentz rarely throws interceptions.

The Eagles are at their best when the run game is flying. They feature a stable of tough running backs who run behind a stout offensive line. They are facing a rush defense, though, that is playing its best football of the season. No team has rushed for more than 89 yards against the Seahawks in the past four games. Expecting that kind of suffocation is probably optimistic, but if the Seahawks can slow this Eagles running game, it could be the key to giving the offense the chance it needs to outscore them.

Wentz also has not been the same player on the road. He has a 94.4 passer rating away from Philly versus a 113.2 rating at home. His completion rate drops from 63.5% at home to 56.7% on the road. The stadium will be full and loud. The closest comparable venue he played in this year is Kansas City, and we know how that turned out.

That should help the Seahawks pass rush, which has the upper hand already against this Eagles line that has surrendered a fair number of sacks. They are without Jason Peters at left tackle, which could be a chance for guys like Dion Jordan, Frank Clark, and Branden Jackson to wreak havoc.

The Seahawks kick return game has come to life the past two weeks. The Eagles have struggled in kick coverage all year. Tyler Lockett could be a wild card.