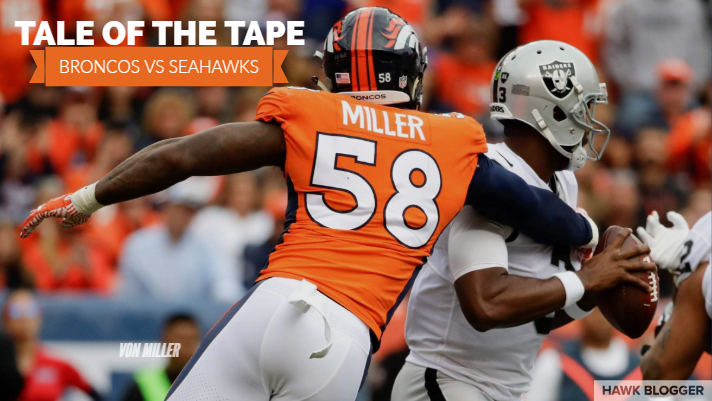 Here we go. Season one of the 2018 NFL season is upon us, and the Seahawks travel to Denver to take on the Broncos for the rarely successful road opener. How rare are road opening wins for Seattle? Well, they have won only one in Pete Carroll’s tenure, and are 8-16 since the franchise was born. Denver, on the other hand, is 29-7-1 in week one home openers. Read more here about Denver’s early season home dominance if you want to fully understand how much history is on the Broncos side this Sunday. History, though, does not define the present and future. Seattle brings fresh faces into this matchup that makes planning for them difficult. They have the better quarterback, which is often a good predictor of victor. They even have the better punter. We may need to take a commercial break to wait for Michael Dickson’s kicks to come down in that altitude.

Denver is a far tougher matchup than their 5-11 record from last season indicates. This was the best defense, in terms of yards allowed, in the league. They suffered through awful quarterback play that led to tons of interceptions and challenging situations for the defense. Case Keenum is not a great talent, but he limits mistakes. That might be all Denver needs to be competitive in every game with the talent they have on the other side of the ball.

A Seattle win here would be far more of an accomplishment than anyone nationally would acknowledge. It is going to take an uncommonly fast start from a Carroll team that has been known as much for slow starts to the season and to games as they have been for dramatic finishes and comebacks. The schedule gets harder in the second half this season. Winnable games like this one are going to be the difference between true playoff contention for Seattle and pretender status. It obviously starts with Von Miller. He is one of the league’s best defenders, and will have the luxury of lining up opposite Germain Ifedi. Look for the Seahawks to give Ifedi some help from their tight ends and backs. It is not outrageous to think George Fant could be called off the bench to spell Ifedi if Miller is completely dominating the game. Shaquill Barrett is a solid pass rusher in his own right, but the pass rush was not nearly as dominant as some might think. That is part of why Denver added rookie Bradley Chubb. He did not have a great preseason, finishing with just a 51.1 rating from ProFootballFocus. His adjustment from 4-3 defensive end to 3-4 outside linebacker may take a little longer than Broncos fans would prefer.

Denver also has one of the best corners in football in Chris Harris Jr. He is an outside corner in their base defense, and slides inside in nickel packages. He will likely match up against Doug Baldwin, who is coming off an undisclosed injury to his knee that the receiver claims will not heal this season. That could mean Russell Wilson’s top target is covered up Sunday, forcing him to look elsewhere. Then again, Denver may choose to keep Harris Jr. outside given their acquisition of veteran slot corner Tramaine Brock. That would be a boon for the Seahawks.

Domata Peko Sr. helped anchor the best run defense in the NFL last season. There is little reason to think that will change this time around. Knowing how much Seattle will want to establish that part of their game, the Broncos could enjoy a huge advantage if the Seahawks stubbornly attack the strength of their defense.

As good as the Broncos defense was last year, they struggled to create turnovers. Only a handful of teams finished with fewer takeaways than the 26th-ranked Broncos defense, and the Seahawks offense was among the best at protecting the ball.

Seattle also finished 12th in the league in red zone offense despite a historically bad red zone rushing game. The chemistry Wilson developed with Jimmy Graham is something he will look to transfer to guys like Brandon Marshall (6’5″) and Jaron Brown (6’3″). He will also have more promising backfield options like Chris Carson, Rashaad Penny, and C.J. Prosise to lean on. Denver struggled in the red zone last year, and traded away 6’1″ Aqib Talib. They are left with guys like Harris Jr., Bradley Roby, and Brock, who are all under six feet tall. The Seahawks size at the receiver position could be difficult for the Broncos to handle.

Believe it or not, the Seahawks offensive line may prove to be an advantage. Miller is the only player who truly feels capable of wrecking a game. Duane Brown is great on the left side, and the combination of Ethan Pocic and Justin Britt have been very effective in pass protection thus far.

Perhaps the Seahawks biggest advantage on offense is their new offensive coordinator. Denver has very little to go on when it comes to game-planning for the Seahawks. They have to assume much of the offense is similar to what the Seahawks have shown for years. Only a fraction of the playbook was revealed in the preseason. Seattle can take advantage of this by showing Denver familiar looks and going against past tendencies. The Broncos will eventually catch on and adjust to what Seattle is doing, but there should be a clear early advantage for the Seahawks. Brian Schottenheimer has been waiting for another chance to prove his worth as an OC. It would be great to see him draw up a smart, inventive, game plan. We rarely were able to say that about the previous regime. Denver’s offense was putrid last year. A few key changes could lead to significant improvements. Keenum is the quintessential game manager. His savvy is maddening for opposing fans who see a weak-armed, unimpressive athlete, consistently finding holes in their defense. He is more slippery than he looks, and often extends plays. He threw 22 touchdowns and only 7 interceptions last season with the Vikings after throwing more interceptions than touchdowns with the Rams a year earlier.

I tend to believe Keenum has crossed a threshold into respectability as a better-than-average veteran quarterback. The massive contract Denver paid him would seem to indicate they agree. Keenum does not need to be great for Denver to win. He just needs to reliably make good decisions. The absence of back-breaking interceptions alone will make the Broncos a far tougher team to beat.

He also has a trio of impressive receivers. Everyone knows Demaryius Thomas and Emmanuel Sanders.  Fewer people know Courtland Sutton, a second-round pick, who stands at 6’3″ and has impressive leaping ability. There is a fair amount of buzz about Sutton in Broncos circles, and his athleticism has already shown up with some highlight reel grabs in the preseason. Shaquill Griffin is going to have his hands full with Thomas when they match up. Justin Coleman is going to have a big challenge with Sanders. Nobody really knows what to expect from Dontae Johnson. All three will be tested…repeatedly.

Shaquem Griffin is an awesome story, and it will be a thrill to watch him start in game one with his twin brother. That said, the coaches have not sounded confident in his readiness, and there has been a lot of talk about how the transition to inside linebacker has been a challenging one for him. Denver will look to confuse him and create open spaces due to blown assignments, especially in zone coverage.

The return of Earl Thomas drastically changes the equation for the Seahawks defense. His ability to cover ground and experience reading offenses immediately make the cornerbacks better, and they need that help. It looks like Thomas will play given early coaches comments. That would be undeniably good news for Seattle.

Dion Jordan may also suit up. That would be a shocking return to health given some credible doctors were questioning if his season was at risk. Even if Jordan only plays as a rotational pass rusher opposite Frank Clark, that would be a big upgrade for the Seahawks who would otherwise rely on Quinton Jefferson, Rasheem Green, and either Jacob Martin or Barkevious Mingo. Denver’s offensive line is a weakness. There were one of the worst in football last season in pass protection, and are relying on Jared Veldheer to shore up their leaky right tackle spot.

Garrett Bolles is not a good pass blocker at left tackle. Ron Leary is no great shakes at left guard, and Connor McGovern is a pretty darn bad at right guard. Look for the Seahawks to pressure this line. Ken Norton Jr. is a former linebacker and you can bet he’s heard an earful from Bobby Wagner about getting more chances to blitz. This could be a great game to come out uncharacteristically aggressive with blitzes to test how well this patchwork Broncos line can hold up.

It is going to take a great game from the Seahawks defensive line to give Seattle a good shot at winning. This is an opposing offensive line they should be able to overwhelm.

Dickson punting in Denver is a perfect script for him to start his career. He will have a chance to impact the Seahawks season right from the start. The Broncos offense is not well-equipped to consistently travel the length of the field for points. A few pins inside the 10 or even 5-yard line could shift the game in Seattle’s favor. Consider that the Seahawks were the second-worst team in the NFL last season when it came to net punting average at just 38.8 yards per punt. Dickson was averaging over 48 net yards per punt through three games of the season. That kind of improvement (which is likely too optimistic) would translate to 920 yards over the course of a season or around 58 yards per game.

Seattle also has a healthy Tyler Lockett back as part of the return game. He can be a difference maker.