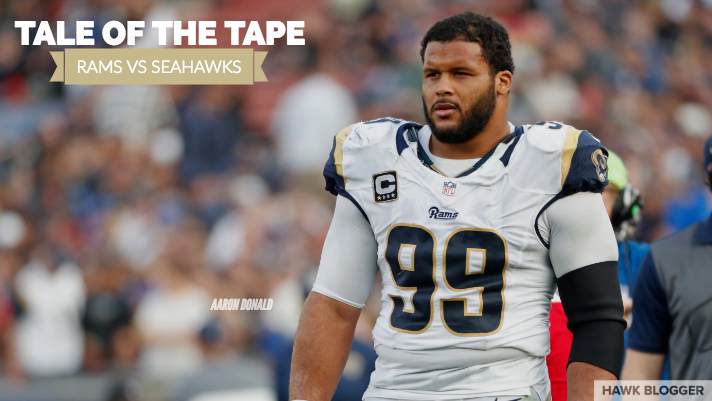 Tale of the Tape: Numbers Don’t Add Up For Seahawks

Nothing in the numbers suggests that the Seahawks will win this Sunday against the Rams. In fact, the numbers indicate that this game should not be close. Remember when the Seahawks fell behind 34-0 to Los Angeles last year in the first half? I wish I could tell you there is no chance that will happen again. The odds of a Seahawks victory are probably slightly better than trailing by five touchdowns at halftime, but they are comparable.

This is the best team in the NFL coming into Seattle, and it is not close. They have dominant players on both sides of the ball and even on special teams. Their head coach is maximizing the talent on offense, and their defensive coordinator is one of the best in league history. Your team is not going to be more talented. It will likely will not be better coached. Seattle does have a few things that could make this a more competitive game than most expect it to be. Aaron Donald. Michael Brockers. Ndamukong Suh. That Rams defensive line that already wreaked havoc on the Seahawks added another dominant player to the mix, who just so happened to injure Russell Wilson in Seattle a couple years ago. There is no offensive line that should feel confident going against this crew. Seattle is getting better line play this season than in the past two, and has returned to a higher reliance on the run. That might reduce the chances of Wilson suffering through another seven sack afternoon.

The Rams defense is not great in defending the run. They rank 23rd in the NFL in rush DVOA by Football Outsiders, and are 24th in yards per rush allowed. The Seahawks started to find their footing the last two weeks running and will almost certainly enter this game hoping to see if they can measure up against this defensive line. The hope here is that enough attention will be given to the run game that the Seahawks will find more room in the passing game.

Hidden in all the drudgery, Seattle has also been a darn good red zone offense thus far. The challenge will be getting those opportunities. It all starts with head coach Sean McVay. He makes things so much easier for his quarterback by scheming players open and creating simple throws. Todd Gurley is really good, but Seattle often bottled him up before McVay entered the picture. Jared Goff was awful before McVay. What the Rams have now is a very solid offensive line that gives their quarterback plenty of time to make high percentage throws to three quality wide receivers. Nobody has been able to slow them down so far. The have scored 33, 34, 35, and 38 points so far. If they match their lowest scoring output of the year, and the Seahawks match their highest output of the year, the Seahawks will lose by 9 points.

They have only played one game on the road, and that game was close at halftime before Derek Carr started throwing the ball to the Rams instead of his own team. Holding this Rams team under 30 points is difficult. Holding them under 20 points is miraculous. That is likely what Seattle will need to do in order to have a shot.

The surprise of the Seahawks season has been the stout defense. I certainly did not expect them to be top ten in almost anything, and yet, there they are among the best in the game in points and yards allowed. Importantly, they are also fourth in the NFL in opponent passer rating. They have managed to create turnovers at a higher rate than in recent seasons.

A couple of turnovers would be huge in this game, and Goff is a guy who will panic and made bad decisions when his first read is covered up or he is under pressure. Seattle lost Earl Thomas, and will be without K.J. Wright or Mychal Kendricks. Those losses make a tough task even tougher. Bradley McDougald has been excellent, as has Bobby Wagner, Shaquill Griffin, and Justin Coleman.

The defense has to at least take away one aspect of the Rams attack. Bottling up Gurley is their best bet.

Michael Dickson is better than Johnny Hekker. That is all.