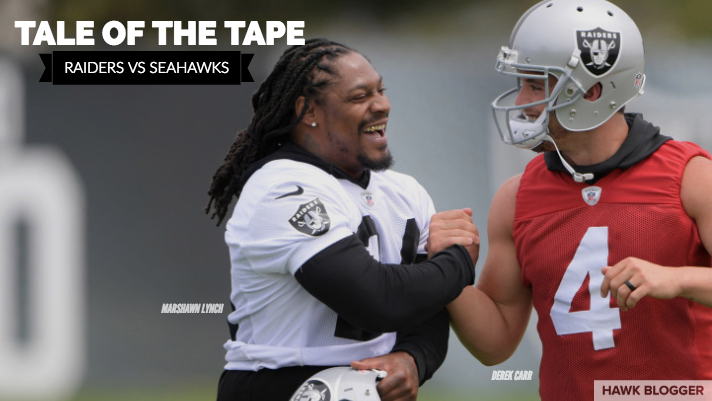 Tale of the Tape: Seahawks Finally Have a Clear Advantage

I cannot remember a Seahawks loss that left a more positive impression than this past week against the Rams. Seattle has found their identity on offense, and have been able to replicate it with some amount of consistency the past three weeks. They are going to run the ball a lot, and look for bigs plays off of play action passes. They are going to limit turnovers and negative plays. The players know. The coaches know. The opposition knows. It is not a game of deception. It is a game of submission. Play after play, the Seahawks are going to stare across the line of scrimmage and hammer away. Teams that have grown accustomed to chasing the quarterback and defending the pass 70% of the time are going to experience something unrelentingly different when D.J. Fluker and Chris Carson pave over their bodies and then do it thirty more times.

This offense is not high-tech, or modern, or creative. Neither is a Shelby 1000. Unfortunately for the Oakland Raiders, they are ill-equipped to stop a team that commits to running the football. Truthfully, they are ill-equipped to stop offense of any kind. Seattle gets the added benefit of playing one of their road games in London where there will be plenty of Seahawks fans present and little in the way of home field advantage for Oakland. This is a game the Seahawks should win, and by a considerable margin. Advantages…advantages…there are precious few for the Raiders on defense. They somehow are holding teams to a low completion percentage, but are among the worst pass defenses in football. There really do not appear any bigger picture or individual matchups that clearly favor the Raiders defense. That is more about the remarkable lack of talent on that side of the ball than it is about the Seahawks.

The Seahawks offensive line has performed like one of the ten best in football for the year, and one of the top handful since Fluker joined the lineup three weeks ago. They rank second in the NFL in pass blocking efficiency during that stretch, and are #1 in power success, which means they are winning short-yardage situations on the ground. They dominated a defensive line that featured Aaron Donald, Michael Brockers, and Ndamukong Suh last week to the tune of 190 yards rushing and just 2 sacks.

The Raiders best pass rushers Bruce Irvin, Maurice Hurst, and Frostee Rucker. None of them are close to the threat level of players the Seahawks have already faced like Von Miller, Khalil Mack, Demarcus Lawrence, and the trio mentioned earlier. Rucker may not even play due to injury. The whole unit struggles on the ground and through the air.

The Cleveland Browns put up 565 yards of offense and 45 points on this group. Seattle should rush for over 150 yards and get enough from their passing game to score over 30 points. The biggest threat to the Seahawks offense is bad coaching decisions and jet lag. Oakland does have some bite on offense. Marshawn Lynch is still a beast. Jordy Nelson has been a solid addition. Jared Cook is having a strong year at tight end and Amari Cooper is ultra-talented. Derek Carr is a polarizing figure at quarterback, and can just as easily destroy his own team’s chances as the other team’s defenses. He has already thrown 8 interceptions.

The Raiders offense should be able to take advantage of an inexperienced secondary that struggled against the Rams last week, and a nearly invisible Seahawks pass rush.

Seattle has found a way to consistently create turnovers so far this season. Even in the first game without Earl Thomas, while facing a powerhouse Rams offense, they still walked away with two interceptions. If they can get another two takeaways in this game, Seattle should run away with it. Michael Dickson has fallen back a bit. Neither team has particularly impactful special teams. Sebastian Janikowski will hopefully be motived to stick it to his former squad.