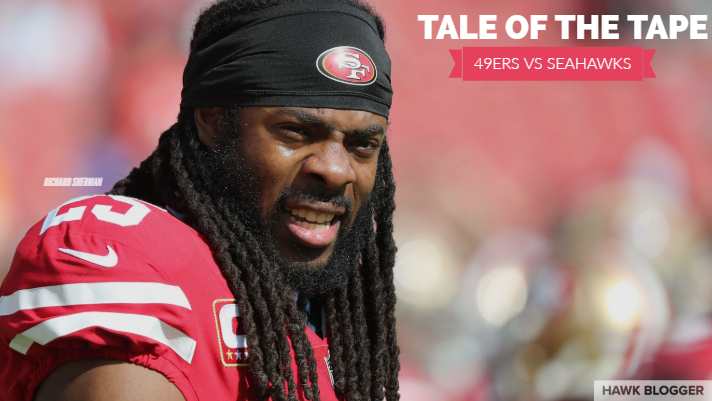 Seattle pulled out a dramatic and improbable win against the Panthers on the road, and now the key to the playoffs sits in their hands. Beating the two-win 49ers twice in the final five games is an absolute must for that key to work. San Francisco enters this game with massive injury issues. Not only did they lose their starting quarterback early, but they lost their starting running back before the season began, and are down to their third string safety. Both starting wide receivers may not play, and they may be missing another safety. Oh, and their starting middle linebacker was cut due to off-field problems.

There is some talent that remains on this defense and in the backfield. Kyle Shanahan is a quality offensive coach who is well versed in how to attack Pete Carroll’s defense. Much will be made of Richard Sherman coming home, but former Seahawks Malcolm Smith, Cassius Marsh, and Tyvis Powell will join him. If I knew nothing about the records of both teams and ignored the injuries, I would see a good case to be made for San Francisco matching up well with the Seahawks. The 49ers have clear strengths that match up with Seahawks weaknesses. This game does not profile to be a blowout, at least not early on.

The 49ers rank higher in yards per play on defense than the Seahawks do on offense. That is a sign of a pretty good defense that has suffered due to a terrible offense. Given the load this side of the ball has had to carry, the 49ers have done remarkably well. They are one of the toughest teams to face on first down, ranking 10th in opponent rush success rate and 3rd in opponent passing success rate on that down. Compare that to Carolina, who ranked 5th in rush and 21st in pass. Richard Sherman has been the top-ranked corner in the NFL this season, per ProFootballFocus. He knows Russell Wilson better than any other defensive back in the game, and excels in covering the deep ball, a Wilson favorite. Seattle would be wise to steer clear of Sherman as most other teams have.

It would be a surprise of the Seahawks add another 150 yard rushing game to their tally this week given the 49ers have yet to give up that much in any game this season, despite trailing in nearly every contest. Brian Schottenheimer showed he can adjust the game plan to go after a team’s weakness in Carolina. He very well could need to do that again versus a team with a stout interior line. The 49ers do not take the ball away, and Seattle does not give the ball away. This is a 1st verus 32nd game in that regard. Seattle needs to execute in the red zone. They can trade touchdowns for 49er field goals all day.

Maybe, just maybe, the Seahawks will work in J.D. McKissic this week and add some explosion to the offense. It’s time for Mike Davis to sit. San Francisco has a massive advantage against the run. Matt Breida is having a great season. The 49ers rank 3rd in the NFL in explosive rushing plays and 6th in yards per rush. They face a Seahawks defense that ranks 27th and 32nd in those two statistics. That, alone, could make this a tighter contest than Seahawks fans are expecting.

49er quarterbacks are not very good right now. They are turning the ball over in bunched and taking lots of sacks. This is a game where the Seahawks pass rush could show up and create some timely turnovers. We might even see our first defensive score.