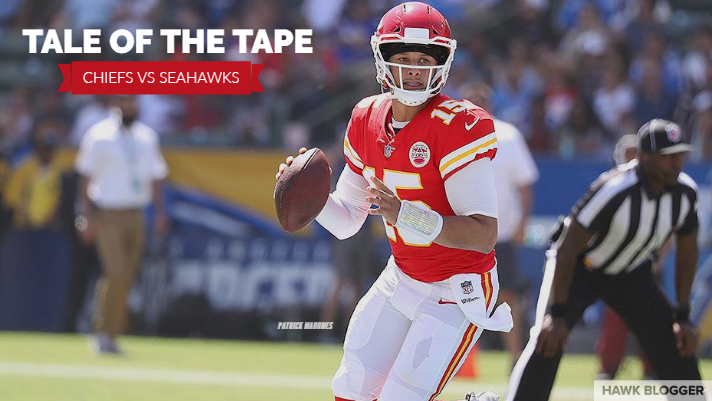 Tale of the Tape: Points Aplenty Ahead in Seahawks vs Chiefs

Pete Carroll thought the 3-0 score through much of the matchup against the Vikings was beautiful. He is far less likely to enjoy this game if defense is what he craves. There may not be a punt when the Chiefs roll into town to face the Seahawks in another prime time Sunday night contest.

Kansas City boasts the highest-scoring offense in the NFL, the likely MVP in Patrick Mahomes, and a fantastic offensive tactician in Andy Reid as head coach. They also feature one of the worst defenses in the league that is so bad in defending the run that they have managed to rank toward the bottom in rushing yards allowed despite being ahead in almost all of their games.

Seattle features a nearly matchup-proof run game that should come into this game reasonably expecting over 200 yards on the ground. That, alone, will not be enough. The same way 273 yards rushing was not enough against the Rams. Russell Wilson will need to be at his best. This is a game the Seahawks can win, despite their aggravating misstep in San Francisco. Do not leave your seat, though, or you are likely to miss points being scored. The one major advantage the Chiefs have enjoyed all season is their ample pass rush. Chris Jones and Dee Ford lead the way, but Justin Houston has done his part and others have contributed as well. That is how the Chiefs are top ten in takeaways.

That has been their formula: give up tons of yards and points, but make enough impact plays through turnovers to allow their offense an extra possession or two needed to outscore the opposition.

The injuries to D.J. Fluker and Jordan Simmons leave the Seahawks in a tough spot. Rushing Fluker back would be a mistake. He is too important for their playoff hopes. Ethan Pocic was an absolute disaster in the 49ers game. His lack of push in the run game and propensity for penalties could be all the Chiefs need to gain an edge.

I very much would like to see Germain Ifedi slide inside to the right guard spot he played as a rookie, and George Fant moved to right tackle. That would allow Joey Hunt or Pocic or any other lineman to play the role of extra tight end. Alternatively, Nick Vannett could simply play tight end like he is supposed to. This Chiefs team is vulnerable to the run without needing extra beef on the line.

Chris Carson should get to 1,000 yards on the season in this game. Expect a heavy dose of him here. We also got the slightest glimpse of what J.D. McKissic can add on the big overtime pass that was called back. He has so much more to offer than Mike Davis. Let’s hope Brian Schottenheimer sees that soon.

The Chiefs have been terrible in the secondary as well, but they have Eric Berry back at safety, and that will make a difference. Wilson will not have time to sit and survey the field, but he will have plenty of options for where to throw. Look for David Moore to break out with another big play game. Any time he is matched up against Orlando Scandrick is a time to throw the ball up for grabs. The Chiefs match up well with everyone. They are the best offense in the league. Mahomes helps them make the unscripted and unbelievable plays. Reid helps them scheme up the repeatable and clever plays.

Tyreek Hill is a nightmare, and will challenge the Seahawks corners and safeties. Their focus on staying on top of him will leave plenty of room underneath for Travis Kelce to torture Seattle. He is better than George Kittle and has a much, much, better quarterback throwing to him.

There is danger in the backfield, but not as much as when Kareem Hunt was in the lineup. The Chiefs have become a less explosive offense overall since Hunt left due to off-the-field legal issues.

Not a lot. The Seahawks corners will get their chances to make plays. Mahomes will challenge them deep, and has shown he will force the ball into coverage. Frank Clark and Jarran Reed need to continue their surge in the pass rush.