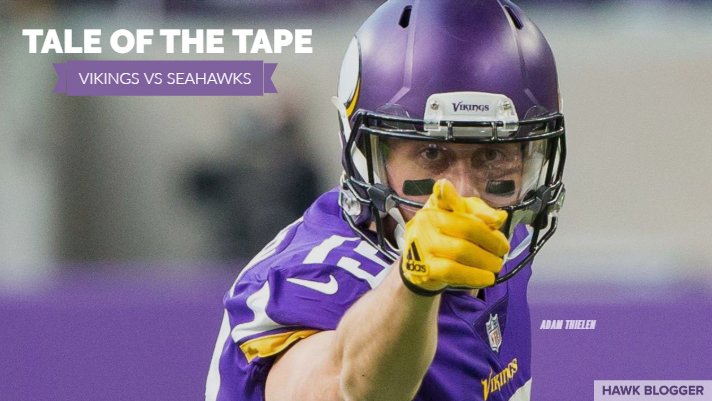 Seattle has rebounded from an 0-2 start to win seven of ten games and put themselves in the driver’s seat to make the playoffs. Their losses have been close and have come against the best teams in football. They have handled their business against inferior opponents and separated themselves from others in the playoff hunt by beating them head-to-head. Their resume reads like a not-quite-elite football team, even if their roster reads more like a cellar dweller. They welcome in another postseason contender on Monday night. Seattle has triumphed every time they have faced an opponent fighting for the final two NFC playoff spots. Versus Dallas. At Detroit (yes, the Lions were in the race back then). Versus Green Bay. At Carolina.

The Vikings have the roster of an elite team, and the record of squad that very well may not make the playoffs. They have been blown out at home by the Buffalo Bills. They have lost to the elite teams like the Rams, the Saints, the Bears, and the Patriots. Yet, they boast one of the best defenses in football, easily the best Seattle has faced since Chicago in week two. They have a top passing attack, led by two of the best receivers in football. Running back Dalvin Cook has been showing signs of life after a dismal return to the field.

Minnesota is fighting for their lives. This is their last stand. They have plenty of talent in places that spell trouble for the Seahawks. That has been true for past Seahawks opponents. It has been trust for the Vikings against other opponents. Seattle mostly has found a way to win, and the Vikings have not. Edge to Minnesota in this one, based largely on how desperate they should be. Where to start…? Danielle Hunter may be the best pass rusher in football this season. He is joined by Linval Joseph, Sheldon Richardson, Tom Johnson, and Everson Griffen to form one of the most talented defensive lines in the league. They are 5th in the NFL in sack rate and also 5th in yards per rush allowed. These guys are a handful. It doesn’t get easier with Anthony Barr and Eric Kendricks at linebacker, or with Xavier Rhodes and Trae Waynes at corner, or with Harrison Smith and Anthony Harris at safety. Harris, if you have not heard of him, is a young player allowing a whopping 9.4 passer rating on throws where he is coverage.

This is the best 3rd down defense in football, and the second-best red zone defense. They have allowed fewer explosive rushes than anyone, and are top ten in limiting explosive passes. They should not need to blitz to get pressure, and have a decent shot at slowing the Seahawks run game without loading the box.

Interestingly, the Vikings have not been playing as well of late on defense, even when you consider their opponents were the Bears, the Packers, and the Patriots. Look at how they compare over the past three weeks versus the rest of the season. I was surprised to see they were 19th and 25th in passing and rushing success rate for the full season, and even more surprised to see they dropped to 30th and 29th in those numbers for the past three weeks. They also are giving up more explosive rushes of late. Note, that this site defines explosive rushes as 10+ yards and passes as 20+ yards, which is why the rankings here are different than in the chart I provided above. I use Pete Carroll’s definition of 12+ yards for an explosive run and 16+ yards for an explosive pass.

Barr and Kendricks can be vulnerable in coverage. This would be a good game to get Chris Carson, Rashaad Penny, or J.D. McKissic more involved in the passing attack. Seattle is also a top ten offense in efficiency and scoring, so they should fear no one. Grinding out yards on the ground will be key, and this is absolutely a Carson game. He enters with a hurt finger, and has already had fumbling issues. Seattle might find Mike Davis a more reliable option to grind out yards if Carson can’t stay in the game, given that Penny has yet to prove he will hit the line of scrimmage and earn the tough yards versus bouncing it outside.

Russell Wilson has had great games against the Vikings in the past, as have Doug Baldwin and Tyler Lockett. A few explosive passes could be the difference. Adam Thielen is arguably the best receiver in the NFL this season. He is making big and tough catches almost every week. Stefon Diggs is one of the most precise route runners around. Both players should be licking their chops at the prospect of facing the Seahawks secondary. Kirk Cousins has had some big games against the Seahawks defense when they were a more talented bunch. This group should be able to get chunks of yards through the air.

The Vikings offensive line is their true weak spot. They rank 27th in the NFL in pass blocking, per ProFootballFocus, and are similarly ranked by ESPN with their new pass block win rate statistic. Seattle absolutely has to win the line of scrimmage, both versus the run and in rushing the passer, to win this game. It cannot be a quiet game for Frank Clark or his crew. The Vikings enter the game with Mike Zimmer insisting the team is going to run the ball more often as offensive coordinator John DeFilippo has eschewed the run game more than the head coach is comfortable with. Sound familiar? Here’s the problem, though… The Vikings are a truly awful running team. They saw some success last week against the Patriots, and certainly have to be hopeful against what has been a terrible Seahawks run defense. Still, Seattle should be begging the Vikings to run the ball more in this game. Their advantage is far less in that part of their offense.

Poor offensive lines tend to really struggle in CenturyLink Field, especially in a primetime game. This represents the Seahawks biggest advantage in this matchup.