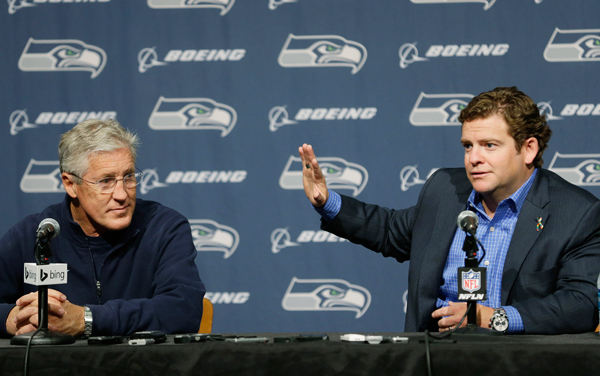 The Seahawks shocked the football world with how seamlessly they orchestrated their turnaround in what was supposed to be a down season.

Seattle won double-digit games and returned to the playoffs, despite getting rid of an abundance of quality defensive starters and losing Earl Thomas to a season-ending injury in Week 4.

Despite a discouraging and frustrating playoff loss in Dallas, Seahawks fans couldn’t help but wonder “What If?” as Jared Goff, Sean McVay and the Los Angeles Rams fell flat on their face on Super Bowl Sunday.

Are the Seahawks ready to make that jump? How close are they? What will help close the gap from surprise playoff team to contending status?

With a critical off-season ahead for the Seahawks on a number fronts, the Real Hawk Talk crew — Brian Nemhauser, Evan Hill, Jeff Simmons, and Nathnan Ernst — got together to chime in on three changes the organization must make to take the next step.

1) Pile on an area of strength: Teams, including the Seahawks, tend to focus on shoring up areas of weakness. I would like the Seahawks to build a dominant area of strength by adding where they already have talent. For example, Frank Clark will be back and Jarran Reed emerged as a pass rusher last season. Jacob Martin showed promise and Rasheem Green could develop in year two. Add another two quality players to that mix either through free agency or the draft and lift that unit to being one of the best in the NFL. I don’t believe the Seahawks will be able to be strong everywhere like they were before Russell got paid. I’d much rather see them be great in some key places than mediocre-to-above average across the board. Defensive and offensive lines are the two most obvious choices here. I’d love to see reasonable free agent spend here. Ezekiel Ansah would be a great add and some would Gerald McCoy, if he hits the market as a cap casualty.

2) Don’t rely on the current secondary:Please, please, please do not hand the starting safety job to Tedric Thompson next year. Do not count on Shaquill Griffin and Tre Flowers to be just good enough. Seattle historically has been more willing to spend high draft picks on safeties rather than corners. They missed on Derwin James last year by not trading up two picks in the first. If there is an impact safety, get him. Corner has been a position where the team has been able to identify and develop late-round talent. Add another to the pile.

3) Dare to dream bigger than Fluker and Sweezy: There are a lot of decent veteran offensive linemen on the free agent market. Don’t just accept status quo. Fluker and Sweezy were merely adequate guards last year and made a big difference over the terrible talent the team has trotted out there in past years. Both have injury concerns, especially Fluker. Consider making your top free agent priority a good guard. There were some rumors Keleche Osemele could hit the market. A guy like that next to Duane Brown could completely change the fortunes of the team. This team was still challenged in pass protection, even when accounting for Wilson’s tendencies. Outsized investment in the offensive line is going to pay dividends.

1) Consult with Warren Sharp: Ideally, the Seahawks would hire Sharp in a full-time Ernie Adams style role, but that doesn’t seem realistic, given how much work he does around the league. Instead, the Seahawks should try to utilize Sharp as a consultant. Sharp has been a guest on Real Hawk Talk on multiple occasions and his knowledge, research, and overall insight has blown me away. His 40-page report prior to the Super Bowl turned out to be incredibly accurate and he did a great job displaying the flaws of Sean McVay’s game plan. He did the same during Seattle’s playoff loss this year. The Seahawks, and especially Pete Carroll and Brian Schottenheimer, could learn a thing or two about game planning, offensive efficiency, and how to find an edge, so Sharp’s unique insight and knowledge would be a big advantage to Carroll and his shortcomings as a coach (game management, game planning, etc).

2) Find a long-term solution at kicker: I understood why the Seahawks moved on from Steven Hauschka after a bizarre 2016 season. The problem wasn’t getting rid of him, as much as it was not replacing him adequately .They have largely failed in this area. They need a stable solution — not a 43-yard Matt Bryant, not SeaBass, not stupid Blair Walsh. The Seahawks need to find a kicker you can have locked in for the remaining Super Bowl window with Russell Wilson (and cap space). Stop trying for shortcuts and hoping to find a diamond in the rough, like they did initially with Hauschka. That’s bad process.

3) Find first round talent in the draft: The Seahawks probably have to trade down this year, due to their lack of picks, but at some point, this team needs to add first round talent. They’ve had multiple opportunities to add high-end talent the last few years and ended up trading down twice to get Malik McDowell and drafted a backup RB (Rashaad Penny) last year. Sorry Evan. The Seahawks haven’t truly hit on a first-round pick since Earl Thomas and Russell Okung in 2010, and this team still needs some blue chip talent to get back to the Super Bowl. I’m fine with a trade down here and there, but stop getting too cute and wasting opportunities to add quality homegrown players at positions of need like Ryan Ramcyzk, T.J. Watt, Will Hernandez, Harold Landry, etc. It’s not a smart way to build a football team.

2) Run Smarter: It’s no secret the Seahawks love to run the ball. And they’re not going to stop. But I hope Pete chooses to be smarter about *how* and *when* he runs the ball in 2019. Go for it more on 4th and short, mix up runs on 1st/2nd/3rd down (don’t always run up the gut two straight times on 1st and 2nd), be willing to abandon the run when it isn’t working.

3) Hire Kam Chancellor to assist the DB group: I know it’s every fan’s fairy tale to have a franchise legend eventually coach for the team. With Kam almost certainly being cut before or around June, it’d be fun to immediately hire him back as an assistant coach to the safety group. Players respect his leadership, his experience, his personality, and his abilities. If he can’t play or be a powerful voice in the locker room, let’s hire him to be a coaching voice.

1) Make Russell Wilson the focal point of the offense: This shouldn’t be controversial. Quarterback is the most important position in football, passing is more effective than ever, and Russell is a top-five quarterback. Making Wilson the focal point of the offense doesn’t mean they have to pass 70 percent of the time, but it does mean finding more ways to utilize Russ. That shouldn’t be too hard as Seattle is running in far too many situations where it’s disadvantageous to do so: 1st and 10, 2nd and long, and on their own half of the field. It also means finding ways to improve the passing game, like using more play action and investing this off-season in players that can help in a more passing-focused offense. Seattle’s offense was good this year, but they were still nearly a full point per drive (2.36) behind Kansas City (3.25) and New Orleans (3.21), who lead the league in that stat. Addressing the low hanging fruit in their offense should help them make up that gap.

2) Be more aggressive in turning over veterans: Seattle has come up on the losing side of the Kam Chancellor, Richard Sherman, and now Earl Thomas situations. While injuries are impossible to predict and likely led, at least in part, to the abruptness of their departures, the aging curve in football is almost universally unkind. As Seattle heads into a draft with just four picks, it’s frustrating to look back at the draft capital they sacrificed trying to squeeze every last productive year out of key veterans. These situations are both unique and dynamic, so it’s hard to apply hard and fast rules, but as Bobby Wagner approaches his third contract I would hope that John and Pete are aggressively investigating what young, cost controlled, talent they can swap him for.

3) No more trades for high profile vets: This is another factor in Seattle having just four picks in this draft. Seattle’s track record in these trades aren’t all bad, they got a few good years out of Jimmy Graham and Duane Brown played very well this year after signing an extension. But the overall cost of these trades, including the Percy Harvin and Sheldon Richardson deals, have been very steep and these win-now moves ultimately failed to push them over the top. Seattle has consistently made the playoffs following their Super Bowl years, so it’s hard to be too critical of the sustainability of their approach. But it’s not clear when the next Super Bowl window will open, something that might be happening now if not for these types of moves.