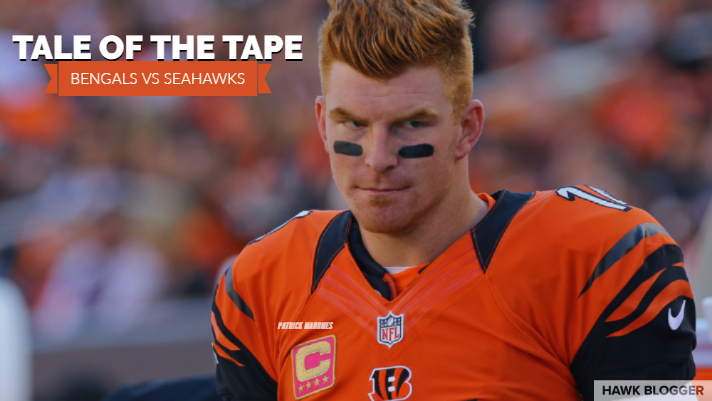 Tale of the Tape: Clawless Bengals in Trouble in Seattle

A month or two ago I happened upon the odds for the opening games of the NFL. My eyes scanned until I saw the Seahawks and blinked a couple of times to be sure I was reading it right. Seattle was favored by a whopping 9.5 points against the Bengals. That is a massive number, especially for week one when teams are rusty. Seattle has only been favorites to this degree twice in their history in week one. They did not cover either time.

Those are the most optimistic numbers I could find to paint a picture of the Bengals being competitive in this matchup. They were an awful team last year, did little to improve this season, and have some key injuries.

Seattle should win this game, assuming they can get out of their own way. Even the powerhouse 2013 squad struggled on opening weekend. The Seahawks have won by 10 points or more just twice in week one under Pete Carroll, and made the playoffs both times (2010, 2014). This could be the third time given how uneven this game appears to be.

It would be hard to argue the Bengals have true advantages on defense. They were uniformly terrible. Geno Atkins is still a beast on the interior of their defensive line. Carlos Dunlap and Carl Dawson are very good edge rushers. They will test the Seahawks offensive line right away.

The secondary features two quality safeties in Jessie Bates III and Shawn Williams. Both had at least three interceptions last year, and Bates surrendered an impressive 59.9 passer rating on plays he was involved in. Dre Kirkpatrick is a 6’2″ corner who could present a good first test for D.K. Metcalf.

Given the question marks for Seattle at receiver, the Bengals secondary may be their biggest potential advantage on defense.

Cincinnati faced seven offenses that were among the top 10 in rushing efficiency last season. They were 1-6 in those games, with their lone win coming against Baltimore early in the season when the Ravens were still starting Joe Flacco.

The Seahawks have every reason to press the running attack in this game outside of making analytics folks throw their abaci at the TV. The Bengals defense is most dangerous rushing the passer and have a strong-ish secondary. Seattle has Jaron Brown and probably Metcalf after Tyler Lockett at receiver. Expect to see Seattle pound the ball early and look for big plays.

The Bengals linebackers are bad at football. This would be a great game to get either Will Dissly or the running backs isolated on the linebackers in the pass attack.

A.J. Green is out. Andy Dalton will have Tyler Boyd, Tyler Eifert, and possibly John Ross as targets. The Seahawks secondary remains a question mark, especially on deep passes. Dalton is a capable deep thrower.

Seattle was one of the worst run defenses in football last season. The Bengals have a solid duo of running backs in Joe Mixon and Giovanni Bernard. They have a new coach in Zac Taylor who was the QB coach under Sean McVay for the Rams and the team sounds excited to unveil their new offence.

Mixon, in particular, is expected to be a central figure probably like Todd Gurley. Seattle has a long list of reasons why they should expect to be a better run defense than last year, but this could be a good early test.

Cincinnati has a bad offensive line, and that was before they lost their top pick for the season and their left tackle looks like he will miss this game due to the concussion protocol. Not exactly a recipe for success in Seattle against what suddenly appears to be a dangerous pass rush.

Bobby Hart and Andre Smith should be in a world of pain against Jadeveon Clowney and Ezekiel Ansah. The guards and the center should not fare much better against Poona Ford and Al Woods.

Expect Ken Norton Jr. to be aggressive with his linebackers to create even more chaos and doubt for that offensive line. That could lead to game-changing turnovers.

The crowd will likely be more enthusiastic than they have been in a while given how much everyone will be buzzing about the Clowney trade. It is amazing to think fans may be more excited to watch the Seahawks defense than their offense.

Seattle has a new kicker in Jason Myers who has shown a big leg that could be a great weapon. The Bengals kicking game was not much better than their offense or defense last season. Michael Dickson looked like a mortal much of the preseason, so it is worth watching whether he dominates as he did last season.

Be sure to tune into Real Hawk Talk tonight at 7:30PM PT!