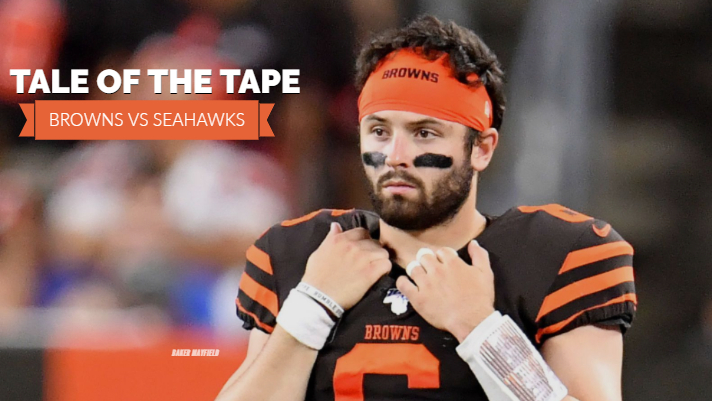 Tale of the Tape: Numbers Show Clear Edge for Seahawks

Seattle plays Cleveland this week in a game that nearly every statistic would tell you is a mismatch. The Seahawks offense has clear advantages over a better-than-they-looked Browns defense. The Cleveland offense is scuffling so much that a mediocre Seahawks defense looks better. Even Vegas has seen the line in this game swing from the Browns as being 2-point favorites to 1 or 1.5 point underdogs.

There is something about this game that gives me pause. Of course, playing on the road is always difficult. The Browns will be looking to redeem themselves at home after a humiliating loss on the road. There is also a clear advantage for the Browns on special teams, where they have one of the best units in the league.

I believe the Seahawks will have to play one of their best games of the season to come away with a win. My gut tells me this will be one of those aggravating, pratfall kind of games for Seattle. Should they find a way to win and remain undefeated on the road, it would be a far more impressive accomplishment than most will give them credit for.

The potential game-changing advantage for the Browns is Myles Garrett and his 7.0 sacks going against Germain Ifedi. That could very well require the team to lean more on Will Dissly to double, removing a key threat from the passing game, or getting the ball out quickly.

Overall, the Browns boast the 4th best sack rate in the NFL. Seattle has managed to surprise a few times this year when facing good pass rush teams like the Saints (1 sack allowed), the Steelers (0 sacks for the final 2.5 quarters), and the Rams (1 sack allowed). They will need to do that again.

Watch for second-year player Jamarco Jones to get his first start playing right guard. He will be tested by Garrett as well on twists and stunts.

Cleveland has been playing without both of their starting corners in Denzel Ward and Greedy Williams. Each will probably be back this week, dramatically improving the Browns secondary.

An area the Seahawks have struggled mightily in this season is 3rd down conversions. The Browns defense has been among the best in limiting opponent 3rd down success. That is another game-within-the-game to watch.

Seattle continues to be the best red zone offense in the NFL. They are scoring touchdowns when many teams are settling for field goals. Those four point swings are crucial, and are one of the biggest reasons the Seahawks are 4-1 despite shoddy play in many other facets of the game.

The Browns are one of the three worst red zone defenses in the NFL. If the Browns play well and the Seahawks are making their typical boneheaded mistakes, Seattle could still win based on their advantage in the red zone.

The Seahawks running game has picked up steam the past two weeks. Chris Carson has had two straight terrific games, and will be facing a run defense that surrendered 275 yards on the ground against the 49ers Monday night.

The 49ers offensive line and run attack looks significantly better than the Seahawks and the Browns will spend the week focused on not allowing another performance like that. Still, Seattle should be in position to be getting into more manageable third down situations with fewer negative rushes.

The Browns also are second-to-last in the NFL in allowing explosive running plays of 12+ yards.

This Browns defense is tougher than it appears on paper, and could be getting back key reinforcements this week. Russell Wilson has to be his MVP self each and every week for this team to win.

Seattle has had trouble tackling at times this season, and Nick Chubb has been one of the best running backs in the league. He is fast and tough. The Rams have some tough run blockers on the line like guard Joel Bitonio, tackle Greg Robinson, and center J.C. Tretter.

Seattle has been uneven against the run. Should the Browns find success running the football, that could lead to far less reliance on a quarterback in Baker Mayfield who has struggled mightily this season.

Tre Flowers has been picked on a bit this year and the Seahawks safety play has been adequate at best. Seattle gives up a lot of short passes underneath, which could help Mayfield gain some confidence and rhythm. They are 7th in the NFL in explosive pass plays, and Seattle has dropped to 16th in defending those after last week.

They also have struggled a ton in defending tight ends (24th in the NFL). Seals-Jones is a tall and slippery player who could give the Seahawks fits.

Mayfield has been a disaster this season. He has twice as many interceptions (8) as touchdowns (4). He is the lowest-rated starting quarterback in the NFL. That has been a big part of how the Browns offense ranks 25th in the league in giveaways and 28th in the NFL in converting 3rd downs.

Seattle’s biggest advantage could be Mayfield making more mistakes. If he plays well, and the team is getting some success with Chubb, the Browns become a far tougher foe. They put up 40 points on the Ravens in Baltimore.

The Seahawks have talked a lot about their pass rush gaining momentum despite a slow start. This would be a good game to get going.

The Browns rank 25th in the NFL in sack rate allowed, and have some real weak spots in pass blocking with right guard Eric Kush and left tackle Robinson. Look for the Seahawks to get Jadeveon Clowney matched up against Kush. Quinton Jefferson could be impactful there as well. Ziggy Ansah will have plenty of chances against Robinson.

The Browns have a major advantage on special teams. They are better kicking, punting, and on coverage. Michael Dickson had a better game last week, and must be a force for good this week to make the Browns offense go the length of the field for points.

Jason Myers missed a crucial kick last week. No more of that.