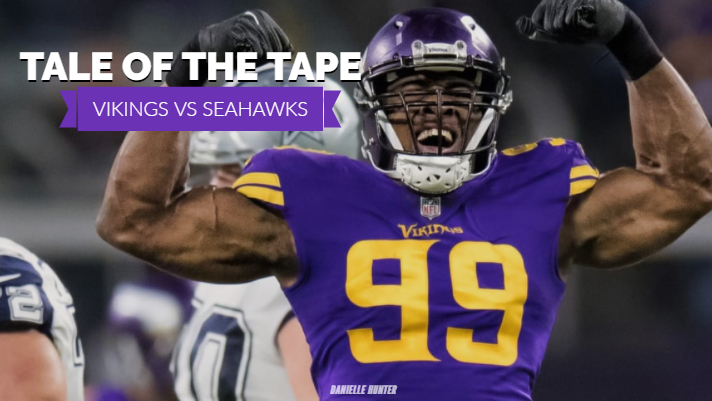 The Seahawks season has clear line of demarcation before the victory over the 49ers and after. Seattle’s defense went from being one of the worst in the NFL to performing at a near-elite level. The question after the 49ers game was whether the defense could do it two weeks in a row, and do it without juggernaut defensive end Jadeveon Clowney. They answered emphatically.

They now face an offense that may be the strongest they have faced all season. Baltimore was better, but the weather conditions hampered both offenses that day. Minnesota boasts a much more balanced attack with better weapons and a more polished passer.

The Vikings defense is no joke either, and the recent loss by Green Bay has Minnesota eyeing the division title. This very well may be the most challenging game left on the Seahawks schedule.

Injuries will once again play a major role as Clowney and Jarran Reed are question marks for Seattle and stalwart defensive tackle Linval Joseph may not be recovered from knee surgery yet.

Seattle has yet to play well at home this year while being undefeated on the road. This would be an ideal time to play a complete game as the Vikings have all the parts to make that necessary for victory.

Danielle Hunter has been a game wrecker at defensive end. To give you some context, Clowney had a remarkable 11 pressures on the QB in the 49ers game. Hunter has had 10 pressures in a game three different times this season. He plays left end, which would put him against Germain Ifedi.

Believe it or not, Hunter was not a major factor last season when the Vikings traveled to Seattle and he faced off against Ifedi. He finished with his worst PFF grade of the season (43.1), even if he ended up with a sack.

Joseph, should he play, would be a major challenge for Joey Hunt. Hunt been overwhelmed at times by players like Fletcher Cox. Joseph has not been his best this season, but can be a major disruptor.

Minnesota has very good players at every level of their defense. Linebackers Eric Kendricks (brother of Mychal) is the top-rated defender on the team and Anthony Barr has always been great.

Harrison Smith is an excellent safety and cornerback Jayron Kearse has been excellent as well.

Somewhat surprisingly, the Vikings pass defense has been vulnerable this season. Despite a good pass rush, very good linebackers and safeties, and what have been historically good cover corners, they have given up a number of big plays.

They are great against TEs (2nd), but this weakness against defending wide receivers could be the key to the game for Seattle on Monday. Russell Wilson has not been his MVP-best of late. Tyler Lockett is recovering from a leg injury. Josh Gordon has not found his place in the offense, and D.K. Metcalf has dropped some passes.

That groups is capable of putting things together much the way the Seahawks defense has, and being a dominating part of this team.

Seattle has also done well running the ball against even the best defenses in football. They did it again when they ran all over the Eagles on Sunday. Minnesota is good run defense, but are not as dominant without Joseph. Even with Joseph has played, he has not been quite the same force he has been in the past.

Minnesota has given up 140+ yards on the ground twice this season, and lost both games. Seattle has gained 140+ yards rushing in four straight games and 6 of the past 7 overall.

The formula is there for the Seahawks offense to run and pass the way they like to operate.

Wilson and the Seahawks offense have not been able to shine yet when facing top defenses. They struggled against San Francisco, Baltimore, Philadelphia, and the Saints. This is their latest chance to show they are elite, and not just very good.

Adam Thielen and Stefon Diggs might be the best wide receiver duo in football. Dalvin Cook is as explosive as they get at running back. Kyle Rudolph is handful at tight end. Kirk Cousins is now the top-rated passer in the NFL, and has tasted victory in CenturyLink Field before.

Cousins and Wilson have battled all the way back to college. They were even both under-drafted, with Wilson (3rd round) going ahead of Cousins (4th).

Minnesota came into Seattle last year with once-hot coaching commodity John Defilippo coordinating the offense. His heavy reliance on the pass did not mesh with head coach Mike Zimmer’s philosophy and was not producing great results. He was fired, and the team is now far more balanced in their attack. Cousins and the passing game appear to be benefitting from the change.

Look at that advantage chart above. The Seahawks defense have not faced an offense all year that had advantages across the board like that. Minnesota does not turn the ball over. Seattle will have to get them off the field the old-fashioned way.

As grim as that chart looks, it represents the average of what the Seahawks defense has been all season. We know how different they have looked the past two games. It is not realistic to expect the defense to dominate the way they did in those games against a much better offense that does not turn the ball over.

At the same time, Minnesota has piled up those numbers against a pretty soft defensive schedule.

The best defenses the Vikings have played have given them a fair amount of trouble outside of the Eagles. They trailed the Broncos by a ton before rallying. Seattle has been playing like a top five defense the past two games. They do that again, and the Vikings could find themselves overwhelmed.

Minnesota has been a better special teams unit all season. Seattle has been improving of late. David Moore and Travis Homer represent fresh legs as returners. In a game between two evenly matched teams, this special teams group will be key.