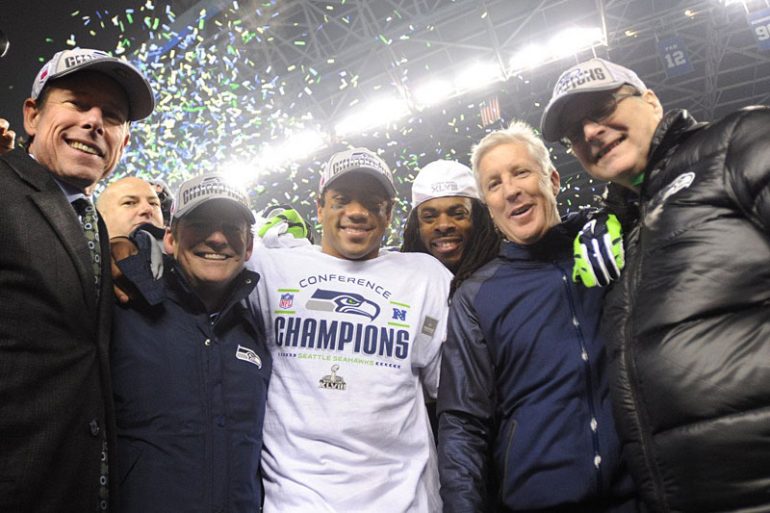 A Fitting End to the Seahawks Greatest Decade

December 27th, 2009 marked the last game of the last decade of Seahawks football. Jim Mora Jr. was the coach. Tim Ruskell had been fired as general manager a few weeks prior. The roster was among the oldest in the NFL, and one of the least talented. They had gone 4-12 the year before in Mike Holmgren’s last season, and would finish 5-11 in Mora’s only year. Seattle played the Green Bay Packers in that last chapter of what had been the most successful decade in franchise history, with four division titles and their first Super Bowl appearance. The game was not pretty. Seattle fell 48-10 in a game that may have sealed Mora’s fate. None of us could have predicted what would come next.

Mora was fired on January 8th, 2010. Pete Carroll came to an agreement to coach the Seahawks on January 9th. He was also named Vice President of Football Operations. Ten days later, Carroll approved the hiring of John Schneider as the GM. They took over a franchise in a free fall.

Their starting quarterback was 34-year-old Matt Hasselbeck. Their leading receiver was 32-year-old T.J. Houshmandzadeh. Their leading running back was Julius Jones. Their sack leader was 33-year-old Patrick Kerney (5.0 sacks). Their starting cornerbacks were 29-year-old Marcus Trufant and a mix of 30-year-old Ken Lucas and the infamous Kelly Jennings. Even their kicker was a 36-year-old, Olindo Mare.

Schneider and Carroll would proceed to turn over the roster at a historic rate, with over 200 transactions in their first year alone. They hit home runs in their first season, including a draft that included: Russell Okung, Earl Thomas, Golden Tate, Walter Thurmond, and Kam Chancellor. They made remarkable trades like getting Chris Clemons and a 4th round pick for Darryl Tapp, as well as acquiring Marshawn Lynch for a 4th round pick. They also added Leon Washington in a less heralded trade that brought considerable returns in the early years. They even found a way for Mike Williams to be a force at receiver for one season.

By the time Bobby Wagner and Russell Wilson were added to the roster in 2012, only seven players remained from the previous decade:

The following season, when they won the first Super Bowl in franchise history, just four remained. That they won two division titles, made the playoffs three times, and won a Super Bowl in four seasons during a complete rebuild will go down as one of the greatest stretches of front office and coaching work in the history of the sport.

Going from the oldest and least talented roster to one of the youngest and most talented helped build a foundation that produced two more division titles (pending tonight’s result), another Super Bowl appearance, and playoff berths in five of the next six years.

They have won more than 10 games seven times during the decade, and two of their sub-10 win seasons were in their first two years. The franchise had just five 10 win seasons before Carroll arrived.

There is no better capstone to this decade of dominance than to play at home in prime time against our largest rival for the chance to hoist another division title banner.

Just as when Carroll first arrived in Seattle, the odds are long. The 49ers enter this game with advantages at nearly every position. If this was a game to determine which team was more talented, San Francisco would win 99 times out of 100. The only way Seattle wins is if their coaching staff massively outperforms their counterparts. It would not be the first rabbit Carroll has pulled out of his hat.

His division title in 2010 was full of improbable victories against more talented opponents. It was highlighted by beating the reigning Super Bowl champion New Orleans Saints in the playoffs in a game where Seattle was a 10 point underdog. You may remember a certain running back from that game who will don the uniform once more tonight.

Carroll has led the Seahawks to 12 victories where they were home underdogs during this decade, and 30 victories overall as underdogs. That includes being 2.5 point underdogs to the Broncos in the Super Bowl.

More miraculous was the way Carroll, Russell Wilson, Lynch and others found a way to compete for the Super Bowl the following season when they were decimated by injuries before and during the game. Chris Matthews was the leading receiver. The entire secondary was hurt, including at least three players who required surgery immediately following the game. They still managed to be in position to beat Tom Brady and Bill Belichick in what was a stunning performance, but will instead be remembered as Carroll and Wilson’s biggest blunder.

I was also pretty pessimistic about the team’s chances to beat the Rams at home a year ago. They were 7.5 point underdogs in that game. They lost by two in a game they absolutely could have won.

One of the things I love most in life is when delight replaces dread. Few things would be more delightful than Carroll and crew figuring out some way to beat the odds once more and rip the division title away from the 49ers.

The chance to cheer for them to do just that, to roar for the beast once again, to stand together in front of the nation, and to know the playoffs are ahead feels like the only right way for this decade to close. Treasure what we have. Dare to want more.