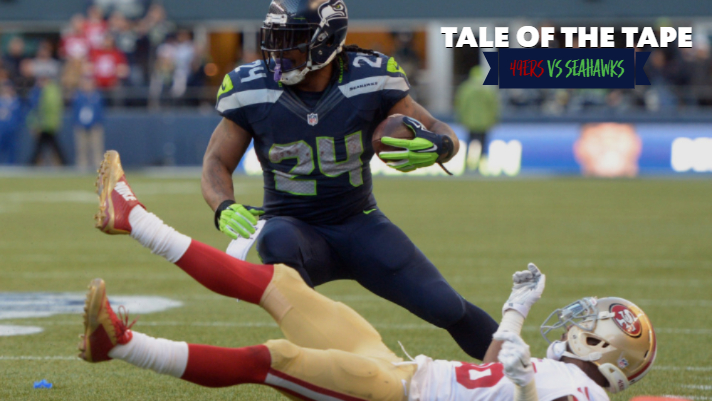 Tale of the Tape: Seahawks Need MVP Russell to Win vs 49ers

Every football team is like a Jenga tower. Some are sturdier than others. This Seahawks team started the season with some missing blocks in their tower, not due to injury, but lack of quality depth at certain positions. Then a few key injuries removed a few blocks, but the tower barely wobbled. The first time the tower truly shook was after the Seahawks beat the 49ers and Jadeveon Clowney sustained an injury that will not get better until the offseason. He has not been the same player since. Losing Quandre Diggs was the next major tremble, and then Shaquill Griffin. When the team also lost Al Woods, Rashaad Penny, Chris Carson, and Duane Brown, the structural integrity of the tower was shot and it came crashing to the ground last week.

The 49ers have also experienced a lot of injuries. For almost every person they lost, they have a player of high quality to insert. They have been without edge rusher Dee Ford for some time. He’s a great player. In his place, they have given additional snaps to Arik Armstead and Solomon Thomas. Both are first round picks, and Armstead is one of the better ends in the league. When they lost CB Ahkello Witherspoon for some time, Emmanuel Moseley stepped in and played excellent football. When starting offensive tackles Joe Staley and Mike McGlinchey were out, two young tackles stepped in and played well.

You will hear from many 49ers fans this week that they are just as injured as Seattle. There is some truth to that statement when thinking in terms of how many quality players they have lost throughout the season. It is not close to true when examining the overall integrity of the rosters.

Seattle is trying to pull some pieces together this week to rebuild a team capable of competing with one of the most talented rosters in football. Marshawn Lynch is not Chris Carson, or even Rashaad Penny. George Fant or Jamarco Jones are certainly not Duane Brown. What this game really comes down to is whether the keystone known as Russell Wilson can hold up the whole team, with a guy like Lynch providing the energy to fuse the makeshift pieces together and maybe even cause a few parts to carry more weight than they have in the past.

This is not a fair fight. It will take a special performance for the Seahawks to win this game. It would be humiliating for the 49ers to lose. The path to victory for Seattle is not a clear and familiar one. They will have to take risks they usually try to avoid. They will need injured players to rise above their pain. They might even need their special teams to be special. Most importantly, they need their MVP to be the best player on the field.

One thing is certain: Pete Carroll will have his team ready to play their best football.

There have been some significant differences between how the teams started the season and how they have played of late. I creating a side-by-side comparison of their full season ranks (left) and their ranks since the two teams played in week 10 (right). The rankings since week 10 are inclusive of that first Seahawks vs 49ers matchup.

Take a look at how the 49ers defense ranks for the full season versus where they rank since week 10. They have dropped in almost every statistic, and by a large margin in most cases.

The problem is the Seahawks offense has also faded significantly.

One of the most confusing parts of the Seahawks strong performance in San Francisco was that Dee Ford and Nick Bosa combined for just one quarterback hit and zero sacks. The 49ers sacked Wilson a decent amount, but not from their edge rushers.

My guess was that was partially good play from Brown and Germain Ifedi, and partially a game plan to keep Wilson in the pocket and create pressure from the inside.

It is hard to imagine a game Sunday where Bosa is not a major factor. Chandler Jones just destroyed the Seahawks, and Bosa is in the same class, if not better.

The 49ers coverage group is also outstanding. Their secondary appears close to full strength, with the health of Richard Sherman being at least a partial question mark despite playing last week. They have great corners on the edge and in the slot. Witherspoon did not play in the first game, and presents significant problems for D.K. Metcalf.

Fred Warner has been playing as well as any linebacker in the league. He is outstanding in coverage. There are very few places where the 49ers do not have an advantage on defense from a personnel perspective.

Nobody knows what to expect from Lynch. He is a wildcard. It is easy to bet against an older player who has not played in over a year. As silly as it sounds, I find it hard to imagine Lynch being totally ineffective. That does not mean he will dominate, but his will is singular, and he does not need to gain 100 yards to contribute.

San Francisco continues to be a team that has trouble containing the running game. It is not a true weakness, but it is a vulnerability. They did well against Carson in the first match.

Wilson has been pretty much an above average quarterback for the last six weeks as opposed to the best player in football. We can blame a variety of environmental factors ranging from Tyler Lockett’s injury to line play to weather. The truth is that he has not been able to overcome those things to lift the team on his shoulders.

It looks like it is going to rain Sunday. He will be facing an elite defense without key weapons and protectors. They will be looking to him to lead them. Winning this game without him playing well seems about as likely as a 49ers fan being classy. Russell…you are needed.

This is a terrific running team. Everything starts there. Their running backs are fast and tough. Their run blocking is excellent.

You will no doubt endlessly hear about George Kittle. He is a great blocker and the safety net for Jimmy Garoppolo. You may not have heard, but he did not play in the first game. More likely, you have heard that more than you have heard about how poorly Garoppolo played or how well Clowney played.

Kittle will be a factor. He runs tough and will challenge tacklers. It is his blocking and the play of his running backs that has larger implications.

San Francisco relied on Emmanuel Sanders running slants a lot early in the game against Seattle before he got hurt. Seattle has to take that route away as much as possible.

The 49ers also like to use receivers like Deebo Samuel on jet sweeps. Seattle struggled with those for a few weeks but played them pretty well against Arizona. Yes, it was one of the few plays they defended well.

San Francisco relies a lot on screens, which have been a problem for the Seahawks all year. Expect the 49ers to anticipate a lot of aggression from the Seattle defense early, and to try and counter that with screens. The Seahawks ability to defend the slant and the screen will play a major role in determining the outcome.

The 49ers offense has played well of late. Garoppolo gets all the hype, and he’s done fine. The run game continues to be where this team gets their juice.

Seattle is one of only two teams all year to hold them under 90 yards rushing. The pass rush got so much credit for that victory, in part because it had been completely missing most of the season, but the run defense was at least as impressive.

Garoppolo turns the ball over a lot. He fumbles. He throws picks. Seattle’s best chance of winning is to force him to make higher difficulty throws on long yardage downs. He makes a living off of screens and short throws. It gets very dicey when he has to push the ball down the field.

The lack of Woods on the interior is major bummer. He really let his team down. Bryan Mone was nowhere close to the player against Arizona that Woods has been this year. Seattle has to find a way to slow down that 49ers run game.

The good news is that 49er offensive line has not been playing very well. They lost their starting center and a guard has been hurting. Seattle likely will need to take some big risks with blitzes they prefer to avoid. We might see corners and safeties daring Garoppolo to throw over the top, but that really goes against what Carroll prefers.

It seems unrealistic to expect Clowney to come close to the performance he put on in the first game. If he can be even half that player, or that player for half a game, that would be a big deal.

Shaquill Griffin also played really well in the first game and should have had an interception. His hamstring injury is a big deal. His ability to play at a high level is a big swing one way or the other.

Diggs probably will not play, or if he does, very well may not be able to play well enough to help or go for 60 minutes.

One bit of good news is Jamar Taylor will not play, and he absolutely killed the Seahawks in the first game. He cost Griffin the interception on the first drive and gave up play after play including a touchdown.

Jarran Reed played well in the first game, as did Poona Ford. Those two need to be war horses in this one. They need to summon whatever strength they can find to disrupt the middle of the San Francisco line.

Ziggy Ansah barely played the first time, as he split reps with Shaquem Griffin. The team will need one, or both, of them to make impact plays.