Tale of the Tape: Division title hangs in the balance as Rams travel to Seattle 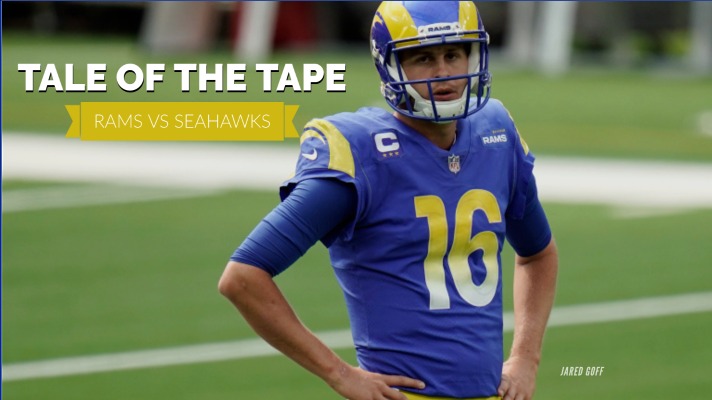 Pete Carroll would be wise to put in a call to Kyle Shanahan this week and get any tips he can about how to beat this Los Angeles Rams squad. Seattle has found ways to lose games to the Rams since the Jeff Fisher days, no matter how talented the Seahawks were.

Consistent during those last 10 years has been a dominant Rams pass rush that has given Russell Wilson fits. Even before Aaron Donald, there was Chris Long and Robert Quinn overwhelming the Seahawks offensive line. Through it all, those Rams defenses were vulnerable against the run or flawed in the secondary to allow the Seahawks to eek out a few wins.

This Rams defense has no glaring weakness. They are coached well. They have what might be the best secondary in the league and one of the best defensive lines. They have arguably the best player in all of football, and are relatively healthy.

Only one team has scored more than 30 points against them. Seven teams have scored more than 20. Only two of the last eight opponents have managed even 300 yards against them (the Seahawks were one of the two). What keeps this team from being a dominant Super Bowl contender is a mercurial offense led by an unreliable quarterback. They struggle enough to score that the team is just 2-5 in those seven games when opponents score more than 20 points.

The Dolphins miraculously scored 28 points despite having just 145 yards of offense. How? Because Jared Goff and the offense was awful, and turned it over 4 times. In fact, this offense has a turnover in every single game this year.

Seattle has been nowhere near the best offense in football since these teams last played. Their defense is far from historically bad. Actually, they are #1 scoring defense in the NFL over that span. Yep, you read that correctly.

Both Russell Wilson and Goff have not been playing their best football. Goff has been the worst QB in the NFL by EPA/dropback since week eight, and Wilson has been roughly equivalent to Teddy Bridgewater instead of rubbing elbows with Patrick Mahomes and Aaron Rodgers.

The Seahawks offense could be firing on all cylinders and this would be a tough matchup. They are far from playing their best football.

As is so often the case in the NFL, this game will come down to which quarterback plays a better game. Goff easily outplayed Wilson in the first matchup simply by not throwing an interception, while Wilson threw two and lost a fumble.

Has this Seahawks defense really improved, or is it just a mirage against inferior opponents? Can Russell Wilson make wise decisions, and lead his team to victory? I believe the Seahawks will win this game, and I expect it to be a classic.

There are some lineup differences of note. Seattle did not have Chris Carson, Carlos Hyde, Rashaad Penny, or Ethan Pocic in that first game. It was all Alex Collins, DeeJay Dallas, Travis Homer and Kyler Fuller in that game.

The Rams will be without LB Micah Kiser and S Taylor Rapp. Both have been on IR and will not return this week. Kiser was leading the Rams in tackles before he was hurt and led the team with 12 in the first game against the Seahawks. Troy Reeder has played well in his place. Nick Scott has filled in ably for Rapp.

You will notice a change in the table below. I have provided a side-by-side comparison of how the teams rank overall and a snapshot of their rankings since their last matchup. This provides an idea of how they have been playing lately.

Everyone knows about Donald and Jalen Ramsey. Seahawks fans got a rude introduction to Darious Williams in the first game when he picked off two passes. John Johnson is one of the best safeties in the league. Sebastian Joseph-Day has helped to plug what has been a hole in the run defense at DT.

The Rams defense defends everything pretty well. Leonard Floyd collected a couple of sacks against Seattle last time, and could be facing Cedric Ogbuehi. Ogbuehi played much better last game, but the task is no easier this week.

Brandon Staley is a future head coach and would appear to have the advantage over a struggling Brian Schottenheimer.

One of the potential advantages for Seattle appears to have disappeared as Josh Gordon has already failed to comply with the terms of his reinstatement and will not be permitted to play in this game. That is too bad on a variety of levels. From a purely football perspective, I believe he could have had a material impact on this game.

Seattle is a better and more talented running team than they were the last time these teams played. Carson and Hyde and Penny give the Seahawks more weapons.

Wilson also decided not to challenge Ramsey at all. It would not surprise me if the Rams choose to let Williams or Ramsey face DK Metcalf this time after having Ramsey shadow him the first game. I expect the Seahawks to involve Metcalf more, and make a concerted effort to get him targets early.

Ramsey can be prone to pass interference penalties on deep passes. Metcalf had beat Ramsey a few times in that game and was not rewarded for it.

Whether Wilson can get away with playing timid and conservative depends on how well the Seahawks defense is faring. My expectation is he will need to LTFF (let the f’er fly) to win this game. He will need to make gusty throws into tight windows. He will need to play like a top five quarterback. He has yet to do that against a top defense this year. Now would be a great time to start.

The Rams lost Andrew Whitworth in the first half of the game against Seattle, and he has not returned. Joseph Noteboom has filled in very well as a pass blocker, but he is nowhere near the run blocker Whitworth was. The Rams run game has a suffered a bit as a result.

Los Angeles will be without RB Cam Akers as well, who was injured against the Jets. He was the leading rusher for the Rams against Seattle.

Seattle was missing Shaquill Griffin, Benson Mayowa, and Quinton Dunbar in the first game. They also played with an injured Jamal Adams who was basically playing with one arm. Damon Harrison was just getting his first snaps as well.

It is not clear if Dunbar will suit up for this one, and Tre Flowers may not be back yet either.

The Seahawks defense is night and day statistically from where they started to where they have been since that game. It really seemed to start in the second half of that game where they held the Rams to just over 3 yards per play and one scoring drive.

Sean McVay is always a major mismatch with Ken Norton Jr. He embarrassed the Seahawks in the first half of the first game, scoring on each of their first three drives. Seattle cannot afford another stretch of flawless execution from the Rams offense. They need to challenge them early.

The Rams receivers are always tough, but it will be interesting to see if Griffin and DJ Reed Jr. give them a better fight in this one.

Seattle has been rushing the passer much better, but the Rams are great at protecting the QB.

Pass pressure is absolutely key in this one. Goff has a 46.3 passer rating when under duress this season, which ranks 25th in the NFL.

Goff has been the worst QB in the NFL by EPA since week 8. Take a look (farther down is bad)

That game includes his awful game against the Dolphins. Even if you limit to just the games since these two teams last played, he is still ranked 17th.

Goff had been ranked 6th in the NFL in EPA/play over the first seven weeks of the season. What changed?

Brian Flores and the Dolphins appeared to do serious harm to McVay’s offense with their heavy blitz packages. McVay wisely adjusted during the bye week before playing Seattle and the Rams have shown a far greater ability to be functional against the blitz, but they have struggled a lot on 3rd downs.

Goff has also continued to make bad choices when under pressure, crippling the offense with turnovers. That, combined with a step back in the run game has left the Rams offense unreliable.

Seattle is in better position to defend this offense than they were in the first game. Adams health and increased comfort and confidence in the defense is stabilizing the whole unit. A more functional pass rush, combined with better cornerback play means fewer blown coverages.

The Seahawks have gotten their hands on a lot of passes the last two weeks. Their best chance to win this game involves nabbing a couple of Goff’s throws.

Los Angeles has one of the worst special teams units in the NFL. They have allowed a punt return for a TD, and give up over 28 yards per kick return. Reed could spark Seattle with a big return.

The Rams punt coverage is not great either. Kicking has been bad, as they have gone through three kickers. Matt Gay has settled in, but the Rams have yet to make a field goal over 50 yards this season.