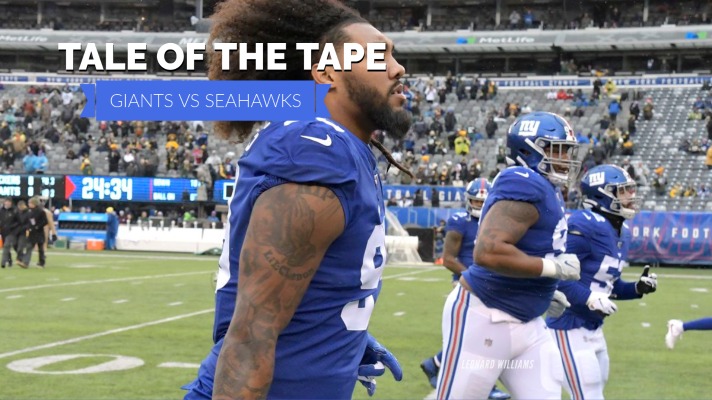 The New York Giants have won three games in a row, and should have won four if not for some bad fortune against the Tampa Bay Bucs. They have been playing some of their best football of the season, and are in position to take control of the sad sack NFC East by beating the Seahawks on Sunday. Unfortunately, for them, their emerging young franchise quarterback, Daniel Jones left their last game with a hamstring injury and appears almost certain to miss this game. They also lost their best edge rusher in Kyle Fackrell for at least a few weeks.

It was going to be a tall task for the Giants to upset the Seahawks with those two in play. Without them, Seattle has a much larger advantage and room for error.

The combination of a Seahawks defense playing their best football of the season with an offense that will be playing with a backup quarterback in Colt McCoy does not bode well for New York. The last time McCoy won a game he started was 2014. A surging Seahawks pass rush facing a challenged pass blocking offensive line will not help either.

The Giants will have to run the ball effectively to have a chance in this game. That plays into a Seahawks strength. Should the Seahawks get out in front, and the Giants are forced to pass, this game could get away from them.

There are many ways for Seattle to win this game, and very few for New York. If the Seahawks stop the run and protect the football, this game should not be close.

The Giants defense has some players who could exploit some of those issues. Leonard Williams, Dexter Lawrence, Dalvin Tomlinson, and B.J. Hill make up a very strong interior defensive line rotation. Williams’ 38 pressures rank 6th in the NFL for interior linemen, above guys like Cam Heyward, Akiem Hicks, and Fletcher Cox. The other three DTs have 15 or more pressures themselves.

They are also great run defenders, and have a terrific linebacker in Blake Martinez flanking them. Safeties Logan Ryan and Jabrill Peppers are also willing in run support.

Cornerback James Bradberry is a quality cover corner with good size at 6’1″ and 212 lbs. He will likely draw DK Metcalf. Isaac Yiadom is the other edge corner and stands 6’1″ as well. His ability to stay with Tyler Lockett will be tested repeatedly. Darnay Holmes is their nickel corner. Expect the Seahawks to try and get Lockett or Metcalf matched up on him any way possible.

The Giants will want Seattle to run the ball and get into obvious passing situations where their pass rush can get home. Passing on early downs will be key to keep the Giants off balance.

An important matchup will be whoever the Seahawks throw out there at right tackle against Jabaal Sheard.

The Giants secondary has some strength at safety and Bradberry is a quality corner. None of it should be enough to stop Metcalf. This would be an ideal game for Lockett to show he is healthy and still dangerous as the Giants will have a lot of eyes on Metcalf, and have nobody qualified to cover the shiftier Lockett.

The Giants rank dead last in the NFL in defending third receivers. David Moore did not look like himself on Monday night. Having him healthy could be another key.

Russell Wilson has to be careful against a Giants team that has been decent about taking the ball away. The lack of Fackrell on one edge means Duane Brown should be able to control one side and potentially get some edge in the run game.

There really are not that many. Sterling Shepard is a quality receiver, as is Darius Slayton. Golden Tate returns to Seattle and is always a handful. Evan Engram is a speedy tight end, and Levine Toilolo is a big target. All of those guys are dependent on McCoy getting the ball to them, and he is dependent on the offensive line giving him time to throw.

They run the game pretty well, with Wayne Gallman being their most dangerous back.

The Giants line is not great in pass protection. Seattle will likely sit back in coverage and try to get home with four players. Carlos Dunlap’s status is one to watch, with the guess here being that he will not play.

Seattle has been much better at mixing their coverages and blitzes lately. They are less predictable and getting pressure from a variety of players, which makes it tough to game plan for where to focus protection.

Poona Ford has been terrific of late, and really, most of the season. His biggest growth has been as a pass rusher. He and Jarran Reed and Rasheem Green and L.J. Collier will have a chance to impact this game from the inside.

Shaquill Griffin and Tre Flowers played well against Philly, in part, because they did not need to respect the deep ball. That will be true again this week against a team even less adept at completing explosive passes, and that was before they lost their starting quarterback. Flowers and Griffin should crowd the line and make McCoy hold the ball long enough for the pass rush to get home.

Jamal Adams will be a key player in this game, not only in the pass rush, but in his coverage against Engram.

Seattle does not have as big of an advantage in special teams as they usually do. Graham Gano has a big leg, and the Giants punt return game is strong.