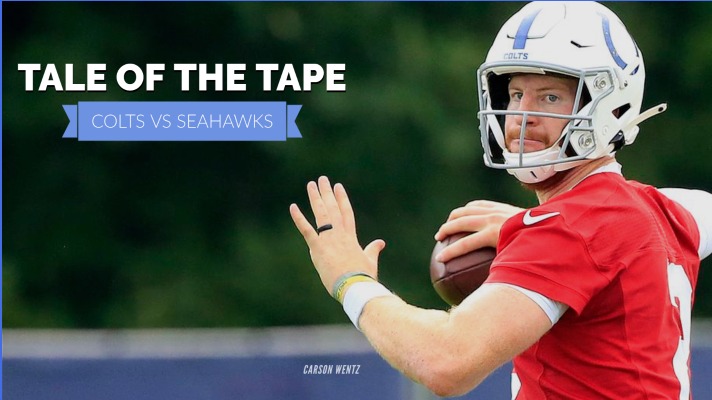 Tale of the Tape: Seahawks and Colts Bring Unknown Offense to Season Opener

The 2021 season kicks of for the Seahawks with a 10AM PT game against the Colts in Indianapolis. Both teams have seen enough change at key parts of the team as to amplify the mystery of what is always an unpredictable first week of the NFL season.

Indianapolis lost their starting quarterback—Philip Rivers—and their starting left tackle—Anthony Castonzo— to retirement. They brought in Carson Wentz and Eric Fisher to replace them, but there are question marks about whether either will be available for the first week of the season (although signs are pointing to them playing). All-Pro guard Quenton Nelson also has some injury availability question marks for week one. We do know productive wideout T.Y. Hilton will not play for Indy.

Seattle brings a new offensive coordinator in Shane Waldron to the party, having shown very little of their game plan in the shortened preseason in which Russell Wilson did not play a single snap. We have not seen their new offensive line take a snap together either, as most were rested and Duane Brown sat out with a contract dispute.

The Colts defense was stingy at times last season, but lost their top pass rusher in Justin Houston. Seattle’s defense was headed toward a historically bad season, but managed to right the ship and finish in the top half of the league.

It is never easy to prognosticate season openers, but Seattle will have the better quarterback regardless of who plays for Indy, and appears to have a better roster overall. This is a game the Seahawks should win.

NOTE: Please be aware these are 2020 rankings as neither team has 2021 stats yet.

DeForest Buckner is one of the best interior linemen in football, and one the Seahawks should know well from his time in San Francisco. Buckner had 9.5 sacks from the inside and over 50 pressures. That will tell us a lot about new Seahawks starting center Kyle Fuller and the new guard combo of Gabe Jackson on the right and Damien Lewis shifting to the left.

The Colts also feature a do-everything playmaking linebacker in Darius Leonard. He will be a handful to beat in the run game and the pass attack.

Xavier Rhodes is a solid corner on the outside, and returns to the team after being a free agent this offseason.

The Colts drafted Kwity Paye in the first round, who is getting rave reviews as an edge rusher.

The Seahawks pass protection will get an early test.

Indy also boasted the top run defense in the NFL last year, so it could be tough sledding either way.

Wilson has long been one of the best quarterbacks in the NFL. He has also been one who always looks to push the ball downfield and has been sacked a lot. The addition of Shane Waldron to this staff has the potential to make Wilson a more complete threat. There should be more short and intermediate throws than we have seen in the past, and a run game that fits better with the pass game to disguise what is coming.

Dee Eskridge is someone no team is planning for given he is a rookie and played only a few preseason snaps. He could make an impact right away on jet sweeps and screens.

There is nobody on the Colts roster who would feel good about facing D.K. Metcalf. Indy has fine cornerbacks, but Metcalf should be matchup proof coming into his third season. Seahawks fans should hope to see at least 10 targets for Metcalf each game this season.

Gerald Everett and Will Dissly could be the beneficiaries of a lot of focus on the receivers and running backs. Each are capable of putting up big numbers.

NOTE: Please be aware these are 2020 rankings as neither team has 2021 stats yet.

The biggest advantage may be on the interior of the line should Nelson and center Ryan Kelly play, which seems likely. Right tackle Braden Smith is also very solid. Fisher has been steady, but coming off an Achilles injury could hamper his performance.

Wentz being reunited with Frank Reich could help him rediscover his near-elite level of play from a few years back. He’s been pretty awful the last few seasons in Philly with a terrible offensive line and even worse skill players. He is surrounded by better talent and possibly better coaching.

Jonathan Taylor is a load at running back, and Seattle should expect a heavy dose of him regardless of who plays. If Darrell Taylor plays SAM linebacker, the Colts could have a lot of success running his direction.

You would expect a team to have an advantage versus the Seahawks cornerbacks, but the group of Michael Pittman Jr., Parris Campbell, and Zach Pascal do not exactly strike fear in opponents.

Everyone seems to think they know who Jamal Adams is based on his 2020 performance. What many seem to forget is he arrived in Seattle late in the offseason and was playing catch-up much of the time. Given a full year and offseason with the team should allow them to utilize his talents more broadly. This could be a great game for him to showcase his diverse skill set. The team will need him coverage, against the run, and blitzing.

Seattle has a ton of depth on the defensive line and should be able to keep people fresh into the fourth quarter.

Teams still do not know the name Marquise Blair yet. He could create some challenges for the Colts as well. This would be a good time for Jordyn Brooks to announce his ascension.

Seattle would appear to have a meaningful special teams advantage, which could be critical in what is often an ugly opening game for both teams.