Tale of the Tape: Seahawks Will Need Best Game to Beat Rams 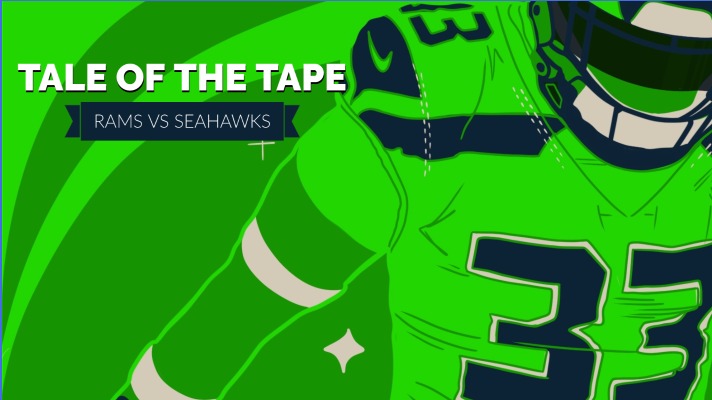 The Seahawks were in the casket. At least a spade or two of dirt had been piled on top as the game started to unfold against San Francisco. Collectively, they rose up and started to climb out. By the time the game ended, they were standing atop their grave covered in dirt and dust. Four days later, the rival Los Angeles Rams are going to do their best to plant two hands in the Seahawks chests, and push them back from whence they came.

Meanwhile, the Rams were sunning themselves by the pool, drinking cocktails and admiring their selfies on Instagram. Then Arizona came to town and flipped their chaise right into the pool. The Rams and their fans were confused and disoriented as they flailed their way to the surface, looking for the stability of the pools edge. They still look fantastic—just ask them—and believe they are a few moments of sunshine away from returning to their perch. Seattle has a chance to revoke their VIP card and send them sprawling into the street, dripping with humiliation and self-loathing.

Much is on the line as the Seahawks square off against the Rams on Thursday Night Football. A Seattle team that was playing awful football for most of two games has a chance to move to 2-0 in the rough-and-tumble NFC West, and send the Rams to 0-2. All they need to do is win at home.

This is a game most Seahawks fans have low expectations for, and for good reason. The Rams are 6-3 against the Seahawks in the Sean McVay era, including a dominating playoff win in Seattle last season. Even before McVay was hired, the Seahawks were 2-4 in there previous six games against Jeff Fisher’s Rams. Even the 2014 Super Bowl team lost to the Austin Davis-led Rams.

This particular contest pits two very statistically similar offenses against two scuffling defenses. Yes, the Aaron Donald and Jalen Ramsey-led Rams defense comes into this game ranked 27th in yards allowed and 30th in 3rd down defense. They rank 25th in pass yards allowed and 27th in yards per rush allowed. They are vulnerable in ways they were not when Brandon Staley was coordinating. The addition of Matt Stafford shrouded the significant losses on defense.

A Seahawks defense that looked like the worst in football, showed a spine against the 49ers when their offense took most of the first half off. What started as a 7-0 deficit, very easily could have finished a 28-7 victory. Stafford and crew, however, are not Jimmy Garoppolo and the 49ers. Slowing down this Rams offense will take a level of play it is not clear this group is capable of reaching.

It is far more plausible for the struggling Rams defense to make enough plays to slow down the Seahawks offense than vice versa. A wild card in this game is the play of special teams. Punk Rams punter Johnny Hekker is struggling mightily, averaging under 40 yards per punt. Seattle needs to force punts for that to matter.

I think the Rams have the advantage on offense, defense, and coaching. They are favored to win this game on the road, even when road teams historically have been at a significant disadvantage on Thursday night games. That feels right to me, even if I do not like it. Seattle needs to be highly consistent and effective on offense to pull out a win here. They cannot go long stretches without at least holding onto the ball for a few first downs. The running game could be the key to keeping the Rams offense on the sidelines and keeping the Rams pass rush off Russell Wilson.

The most likely outcome is a Rams win. Seattle could shake up the NFC with an upset, and reset the ceiling for what is possible this season. It should be a fascinating game.

Aaron Donald and Jalen Ramsey are still two of the best players at their position, or really any position, in the NFL. Donald will owe at least part of his Canton candidacy to the Seahawks OL and Wilson’s penchant for sacks, as he has gorged on Seattle’s offense for years. Kyle Shanahan has had some success in neutralizing Donald by using a game plan that relies heavily on the run and short passes. As great as Donald is, he can be ordinary against the run because he is so aggressive in penetrating that he shoots the wrong gap and leaves a hole for backs.

Seahawks center Kyle Fuller faced the Rams in his first career start in LA last season. Donald did not have a sack or a tackle in that game. That’s not to say anyone should expect the same to occur this time around, but there is some hope there.

It was really Leonard Floyd who terrorized the Seahawks last season. He finished with 7.0 sacks in 3 games, with at least 2.0 sacks in every contest. Brandon Shell looks like he will return from an ankle injury this week, but he was not really the guy getting beat by Floyd last year. A lot of the problem in the first game was Wilson. PFF only attributed 1 of the 6 Rams sacks to the OL or TEs or RBs blocking. The other 5 were on Wilson.

In the second game, 3 of the 5 sacks allowed were attributed to the blockers. One from Ethan Pocic, and two against Jordan Simmons. Neither player will be in this game.

Ramsey will once again be a handful for DK Metcalf, but Ramsey does have a tendency to get penalized. The war of words will be active all game. These are the moments the Seahawks need Metcalf to be the alpha of alphas. He has yet to really put Ramsey in his place.

It was the other corner, Darious Williams, who really tormented Seattle last season. He had 3 interceptions, including a pick six in the playoffs against the Seahawks. He has not been the same player so far this season, with only two pass breakups and an opponent passer rating of 96.9 allowed (compared to 55.4 last season). Tyler Lockett did not look healthy in the 49ers game, but also did not appear on the injury report so far this week for Seattle. Lockett could be a crucial player in this game.

The play of Damien Lewis and Gabe Jackson will be crucial to any Seattle chances of victory. They must be very good in both pass protection and run blocking. Gone is Michael Brockers, who was a force against the run inside for the Rams. Jackson had his best game as a Seahawk against the 49ers, earning a sterling 86.8 pass block grade. It was also Fuller’s best performance.

The offensive line has to play great football. No way around that.

The Rams have struggled against the run. Seattle may be without Chris Carson who has missed practice with a neck issue. Alex Collins could wind up being a key player in this game. He looks ready for the moment.

John Johnson was a big part of the Rams secondary last year at safety and Troy Hill was a standout nickel corner. Both left. David Long Jr. has been just okay in the nickel spot this season. Arizona worked to get their taller receivers matched up with Long to great success. A.J. Green had four catches in four targets, and DeAndre Hopkins caught his only pass against Long, for a combined perfect passer rating of 158.3.

Look for the Seahawks to try and get Metcalf matched up against Long where possible. Ramsey likely will shadow him everywhere.

This may finally be the game we see Gerald Everett emerge in the offense as Taylor Rapp is a good-but-not-great safety, and none of the linebackers are great in coverage.

This is easily the best offensive line the Seahawks have faced this season. They have kept Stafford clean, and Stafford has helped his line by getting rid of the ball in an averaged of 2.53 seconds (7th in the NFL). Seattle has been very ineffective on defense when their pass rush can not bother the quarterback. It will be a tall order for Seattle to bother Stafford.

Cooper Kupp leads the NFL in targets with 45. He and Stafford only struggled to connect in one game, and that was the one they lost. Kupp is an excellent route runner with plus hands and is decent after the catch. Van Jefferson has come on more this season to create a better three receiver attack for the Rams. None of the Seahawks corners have played consistently good football.

Tyler Higbee has been effective against Seattle before as well.

All this adds up to a Rams passing attack that has to feel very confident about what they can do in this game.

One player who has been effective rushing the passer against the Rams is Jamal Adams. He had 2 sacks and a forced fumble in the first game with an 85.9 pass rush grade from PFF. Even with a ton of injuries, he still had a 90.5 pass rush grade in the second game.

With the emergence of Ryan Neal against SF, there is reason to consider unleashing Adams in this contest. It feels hopeful that the Seahawks can create pressure with just four players. They will need to gamble some, and Adams could be their best option there.

The Rams run game has been up and down, and mostly down. They were effective last week, and many Rams fans were frustrated McVay went away from the run so fast against the Cardinals. It would not surprise me to see McVay come out aggressive on the ground against Seattle. There is very little chance the Seahawks can hold the Rams under 30 points if they are giving up yards on the ground.

I do like Sidney Jones in this game more than Tre Flowers. That might seem obvious, but considering Jones gave up two touchdowns in his first start, it is worth explaining why. Seattle now has two agile corners on the outside. Jones and Reed are far more likely to stay with a shifty route runner like Robert Woods than the stiffer Flowers. While many folks, including Pete Carroll, were critical of Jones’ first game, I saw things I liked. The busted coverage is easy to eliminate. This will be a terrific test for Jones.

It is worth noting that Quandre Diggs has 2 interceptions against the Rams since coming to Seattle. His first was in 2019, and went for a 55-yard pick six. That was the last time the Seahawks defense scored. That is a long drought. Ending it Thursday would go a long way toward making an upset possible.

The Rams have been terrible on special teams this season. Seattle has been marginally better.