Search
Home
OffensePassing Game
When Pete Carroll publicly stated his goal for Russell Wilson this season was to complete 70 percent of his passes, my first thought was the coach was looking for that improvement to come from his young quarterback maturing and making better, quicker decisions within the offense. It appears, three games into this season, Seattle has changed the passing offense somewhat dramatically toward shorter passes. That has led directly to a higher completion percentage for Wilson, but also lowered the number of big throws downfield where he has been among the NFL’s best through his first two years. Changing the personality of a Super Bowl championship offense is a dangerous gambit, and one that has gone largely unnoticed until now.

Thirty-six percent of Wilson’s pass attempts in 2013 traveled at least ten yards in the air. That number was 42 percent in his rookie season, according to ProFootballFocus.com. Just 24 percent of his throws so far this season have gone that far. Instead, three-quarters of his throws are either less than ten yards or behind the line of scrimmage. Look at the trends:

The direction of those passes has not changed much. It really has been the depth. 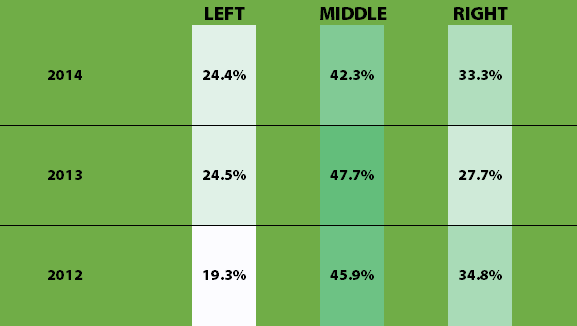 Wilson has been one of the best deep passers in the NFL since he came into the league. In fact,

he was rated the best at throwing the long ball last year by ProFootballFocus, completing over 48 percent of his deep passes. It was not a fluke. He was fifth in that list as a rookie in 2012. Wilson has always had a knack for putting enough air under his deep ball and throwing it accurately enough to make it very catchable. He also has the guts to throw it even when there is tight coverage to give his receivers a chance to make the play. Golden Tate made a living off of going up and grabbing those passes even when defenders were draped all over him.

Throwing the deep pass had a few statistical impacts. Seattle had a high percentage of explosive plays from their passing game. Denver was the most feared passing attack in the NFL and had 14.4 percent of their pass plays gain 16+ yards. Seattle finished at 16.6 percent last season, per Pro-Football-Reference.com. This also meant Wilson had a very high yards per attempt (8.2) and yards per completion (13.1). He finished 5th in the NFL in YPA and 4th in YPC, according to Pro-Football-Reference.com.

That has changed significantly through three games this year.

Wilson has risen from 12th in the NFL in completion percentage a year ago to 4th this year. He has gone from 7th in passer rating to first. He has dropped, however, from 13th in ESPN’s QBR to 21st. There are a variety of factors that figure into QBR that make it harder to know how much of that drop is due to the change in the Seahawks approach. The change in passer rating is far easier to understand.

Wilson is making higher percentage throws, increasing his completion rate, and reducing his interception rate. His yards per attempt is down, but his touchdown rate has gone up. As long as he can keep throwing touchdowns, all these trends should continue.

It makes sense that Carroll would be drawn toward a lower risk passing style. He loathes turnovers and likes to play to the strength of his personnel. The Seahawks have a stable of smaller, quicker, receivers who are better equipped to run away from a defender in a short space than to jump over them to catch a deep ball.
That all makes good sense in theory. The challenge will be accomplishing what Carroll has built his defense betting offenses will not do, which is to sustain long drives without making a critical error like a penalty or turnover. Fewer explosive plays means more things have to go right for Seattle to score.
Only 12.8 percent of their throws have been explosive plays so far this year. That number was 16.6 percent last year and 15.6 percent the year before. Wilson is arguably the best deep thrower in the game. The argument could be made the Seahawks are not playing to the strengths of their quarterback by going this direction. If nothing else, it will put an onus on Wilson to be even more efficient when he takes his shots downfield than he was in his first two years.
Defenses are sure to adjust to this new style. The question will then become how married to this approach the Seahawks are, or whether they are prepared to push the ball farther down the field if the matchups dictate it.
This has been largely a silent shift in how Seattle is approaching their offense, but deserves far more attention. It has succeeded more than it has failed through three games. The true test will be what happens now that opposing teams have more film to study.