Assessing the Seahawks Through Eight Games

Expectations are high for this season. The results have not yet met them. Seattle is a team going through change on both sides of the ball. The halfway point provides a useful moment to see where the team is now, and where it needs to be. 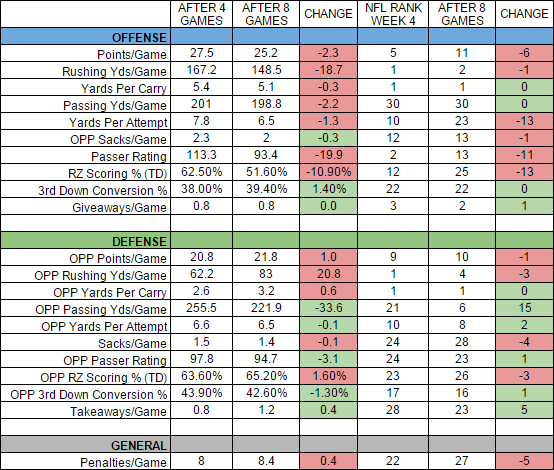 Seattle went 3-1 against Green Bay, San Diego, Denver and Washington. They went 2-2 against Dallas, St. Louis, Carolina and Oakland. That already makes no sense. It is hard to fully assess how much impact the decision to move on from Percy Harvin had on this team. He was a centerpiece of the offense they had been developing throughout the offseason. He played large roles in the Green Bay, Denver and Washington wins. And then he is gone.

It is not surprising to see the offense take a step backward as it tried to find itself again. The two numbers that stand out as needing to recover are yards per attempt and red zone scoring. Seattle has yet to rediscover their explosive passing game. It showed up momentarily in St. Louis (season-high 8 explosive passes and 8.1 yards per attempt), but has gone back into hiding.

Paul Richardson, Kevin Norwood or Jermaine Kearse must emerge as a big-play threat down the field

Russell Wilson has had three bad games in the past four weeks. The team needs him to recapture his consistency and accuracy.

The defense is showing signs of life. The points per game mark is misleading as the Seahawks have allowed two special teams touchdowns in that span and also a long kickoff return that led to points.

Rush defense has remained the best in football and the pass defense has taken a big step forward the last few weeks, shaving over 30 yards passing per game off opponent totals.  The last three opponents have managed just 255 yards of offense per game.

The area holding Seattle back the most right now is their performance in the red zone on both sides of the ball.

Every team except the Panthers was allowed to convert at least 50% of their red zone possessions into touchdowns. Four of the eight opponents converted 75% of more. Seahawks opponents found the end zone on only 36% of their red zone possessions last year. If Seattle made no change except to reduce opponent red zone efficiency to, say 40%, their points allowed would drop from 21.8 to 18.8. That would be third in the NFL.

The offense started strong in this category at 63% in the first four games, but sagged to 40% the last four games. Holding a 60% mark would have raised their scoring from 25.3 to 26.8.

It sounds simplistic because in many ways it is. Turnovers, third down conversions, yards per play and bunch of other measures end up really being about creating or preventing scoring opportunities. A team can be great in a variety of ways, but struggling in the red zone is a four-point swing in most cases for each possession.

Communication and trust on defense is paramount to red zone success. The injuries have led to a number of new faces, but the improvements we are seeing outside the red zone are a good indicator that their play in close quarters could be right around the corner, especially with a number of guys due back soon.

Timing, repetition and chemistry on offense makes red zone possessions successful. It should come as no surprise that a team adjusting to the loss of a central offensive player while trying to integrate two rookies and a second-year tight end is struggling. Wilson is the key here.

He needs to find players he trusts in these moments. That will come from plenty of practice and some time with Darrell Bevell looking for repeatable plays. More Kevin Norwood could be part of the answer here.

Offense not good enough to carry the team

Believe it or not, the Seahawks are averaging the same yards per play (5.6) as they did last year, and more yards per game (347 vs. 339). Their third down percentage is higher than last year. Their run totals are better. Giveaways are just as low as they were a year ago. Should they be able to regain their red zone efficiency from the first four games, their scoring should end up higher than last year as well.
That paints the picture of a slightly improved offense from a year ago. It is important to acknowledge that was not the plan. Wilson, Harvin and the offense was supposed to take a large step forward and cover for any backsliding for a defense unlikely to sustain record-setting numbers.
That plan is either dead or very unlikely to play out. A winning formula this year is going to look far more like last year:
Great defense + Efficient offense + Solid special teams = Winning
For all the hand-wringing about the offensive line, the team is far ahead of where they were last year in yards per rush and are way ahead in pass protection.

Max Unger was playing terrific football and is due back this week. Whenever Zach Miller comes back, he will help significantly as well. Robert Turbin and Christine Michael are growing in their roles, and there is reason for optimism around Richardson and Norwood.

They may not average the 30 ppg I had in mind to start the year, but they should be able to improve from where they are now, which is already a near-top-ten scoring team.

For the first time this season, a dominating defense feels possible. The cornerback position felt extremely thin, but the play of Tharold Simon the last two weeks was very encouraging. Byron Maxwell is due back soon and Jeremy Lane is due back this week. Marcus Burley has played well in the nickel. All of a sudden, the Seahawks could be five deep at cornerback again.
The pass rush had looked toothless most of the season, but flashed fangs the past two weeks. Cliff Avril had his best two games. Bruce Irvin had his best two games. Michael Bennett is playing well. K.J. Wright had possibly his best game as a Seahawks last week. Earl Thomas is involved in more plays.
We don’t know when Bobby Wagner will return, but Kevin Pierre-Louis looks promising. This unit feels like it is leaning forward and gaining steam.

Irvin has looked like a player who may be on the verge of reaching another level of play. He has tasted success the past two weeks. His physical gifts have never been in doubt. Coaches call him the best athlete on an incredibly talented team. He has the ability to impact games with run defense, pass coverage and pass rush. There are not many who can say that.

When the heat turns up for divisional contests in the coming weeks, it will be this groups ability to hold down the opposition that will determine how high they can climb.